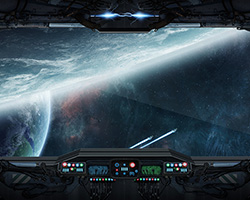 The foot of the massive lift was lowering from the skies as night approached, and they could see it from miles away. It seemed Carne was planning on getting the people transported to the surface quickly. At least that meant the Santa Maria, Nina, and Pinta made it safe and sound. The safety of the last remaining humans was really all that mattered to Karen now.

“So why did they take your transmitter?” she asked Grant in the middle of him telling his story again.

He shrugged. “Not really sure. I think they’ve been given some sort of objective from the ships they drew in the caves. Probably wanted to keep me from sending messages back to Earth in case I found anything. The message you intercepted said they were coming for Earth, and they thanked Carne for the transaction. What do you think it means? Is it as clear cut as it seems?”

“I think so. Carne traded them for this planet. They seem to have a foothold on the indigenous people here, and their technology is evident in the cliff caves you were in. Why would they want to trade this fresh planet for our damaged atmosphere with sick people everywhere? It doesn’t add up.” Karen knew it was time to contact Carne.

She went to the comm-screen and entered the Santa Maria’s comm-code. Moments later she was connected to Communications Office Donaldson.

“Bilson of the Seeker here. I need to speak to President Carne immediately.” She used her authoritative voice, usually reserved for disciplining slacking crew members.

Donaldson’s face blanched slightly then the screen went dark, soon flashing back. “I’m patching you through.”

His face was replaced by Carne’s red-cheeked angry mask. “Bilson, what the hell are you doing down there? You could at least be scouting our landing zone as per your directive.” His voice slurred, letting Karen know he was deep into a few scotches at this point. Was he celebrating or drowning his guilt?

“What did you do?” she asked knowing he would understand.

“What do you mean? I saved humanity! I convinced the world to move enough people to start over. I single-handedly kept the race alive! Me!” His face turned so red, she thought he might burst a blood vessel.

When the alarms rang out Carne sobered in a second. Damn Bilson had the nerve to question his motives, and now this!

“Bilson, get to the landing site for the lift. Now!” He yelled, feeling his head start to pound. Her face frowned at him from the screen before he cut the link.

He got up from his desk and walked to the edge of the room, the door sliding open as he approached.

“Commander Boone, what the hell is going on?” he asked.

The Commander pointed at the comp-screen and there were a couple of green icons nearing their location. “Unsure of what they are but they appear to be ships coming from the opposite direction of Sol. They seem to be heading right for us, so I thought it wise to be on alert.”

“Just turn that damn noise off, Boone.” The alarm quieted but red lights kept flashing on the bridge.

What were they doing coming here? This wasn’t part of the deal. He hadn’t expected this but now he was glad he had a back-up plan. Carne was thankful he’d never trusted anyone in his life. It might save his legacy in the end.

The screen went blank, Carne’s face being replaced by nothing. Grant had never met the man, but he’d just enforced what Grant had always thought of him. He was a pig of a man. Power hungry and rude. Ego led his decisions. It was for his own self-worth.

Before she could answer, a face appeared on the screen; this time a young woman appeared.

“Breena, what do you have for us?” Karen asked.

“Two ships are coming. They should be arriving in an hour or so judging their current pace. They look quite massive. Close to the size of our own vessels. Transport ships if I was to guess,” Breena replied.

Grant’s gut was telling him this wasn’t good.

“Any word on the translation?” he asked, impatient to know the answer.

“It’s just about done. It appears it was a loop you recorded. A short message said over and over twenty times. Wait, the program is telling me we are almost there.” Her voice shook when she said, “I’ll patch the message through to you right now.”

A robotic, monotone voice came through the speakers, and Grant reached out and grabbed Karen’s hand while it spoke.

“The humans are arriving. Their wealth is depleted, spent on ships. They leave their planet behind, helpless. Undefended. We have lured them to you to destroy. We gave them elevator technology, and when they are lowering their people to the surface, open the Slintrok. Kill them before they set foot on your world. It’s been a pleasure.”

“We were unable to translate that one word, but I can only assume it’s a weapon of some sort.” Breena cut in. “This message repeats over and over.”

“Damn Carne. He made a deal and was fooled. They lured us away from Earth. Made us spend all our energy on transport ships and the lift, leaving nothing for weapons to defend ourselves.” Karen was shaking and Grant put his arm around her, hoping to console her briefly.

“There will be time to kick his butt later. For now, we have to save what’s left of humanity. They have a weapon to destroy the lift on this planet? I think I know where it is.” Grant gave a confident smile, though every inch of him was terrified.