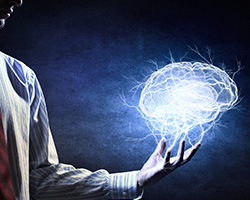 ‘You called me, Doc. So what’s going on?’ I looked up at the camera and threw it a grin. When Riddles opened the fire door, my jaw dropped. His head was wrapped in aluminum foil. But that wasn’t the worst of it. I pinched my nose. ‘You look like… crap, and you smell like—’

He handed me a silvery foil hat. The hollow look of his eyes and the dark stubble kept me from hurling more insults.

Riddles leaned out as if making sure there was no one else outside. Entering through the loading dock of the BioGentics Research building gave me a bad feeling.

‘Keep your voice down, Jimmy, and put the hat on.’

‘Doc, you are beginning to scare me.’ I put the hat on.

He eased the fire door shut, and grabbed my sleeve. ‘This way… hurry.’

We jogged the length of a hallway lit up by a blue-white emergency light at the far end.

Riddles steered me up the stairs. Four floors later, my chest pounded. ‘Hold on, I need to catch my breath.’

I staggered into an office that looked like a doctor’s waiting room and plopped into the closest chair. ‘What gives?’

He swung the door shut. A red ceiling light flashed over his head, giving me the willies. ‘It’s out of control.’

‘You’re not making any sense. What’s out of control?’

He pressed an ear to the door. ‘I don’t know how much time we have, so I’m going to make it short. Someone has to know.’ He sucked in a long breath. ‘Jimmy, you know what we do here?’

‘And we’ve been very successful.’ His gaze wandered to the door.

‘Go on.’ I noticed that the wall clock wasn’t running. No lights on the phone console, either.

‘You heard about our tissue work—in vitro generation of livers and kidneys. We use stem cells, so that—’

I waved him off and nodded. ‘Doc, I get it. What do you want with me? I’m just a high-school chemistry teacher.’

‘Last year, management thought we should take on something more challenging.’

The floor shook for a second, sending Riddles back to the door. He turned the dead bolt.

‘So we started with mice, Jimmy. Just to see if the fundamentals would apply.’

I couldn’t help but raise my voice. ‘Get to the point.’

‘Then rats, of course.’ Riddles adjusted his hat. ‘It’s getting hard to think.’

Maybe it was contagious. I was getting a headache. ‘What the hell did you do with mice and rats, Doc?’ I felt another tremor.

The man slid down to the floor with his back against the door. ‘We tried it with human brain tissue.’

‘What the hell for?’

‘The idea was to grow specific sections of the brain, you know, to replace damaged or missing tissue. Human stem cells—we transformed them into brain cells. And it worked.’

‘You already said that. And?’

‘We didn’t expect them to grow into a whole brain.’

I pictured an isolated brain floating in some kind of soup with bubbles and wires.

Riddles gasped. ‘Do you see the problem, Jimmy? Do you see it?’ His eyes fluttered for a moment. I thought he was out, but a twitch later, he was back. ‘The problem—’

‘Senses, Jimmy. It had no sensory input.’

That got me to pause—a brain grown from scratch, not connected to anything. No input. I got a real bad feeling.

‘It kept growing—like it was searching for some physical way to connect with the outside world. Jimmy, you can’t imagine—’

Sparks began flying off his little foil helmet. I threw mine off, maybe a little too late. I smelled burned hair.

Riddles tore at the foil. His mouth opened into a silent scream like in Munch’s painting. That’s when the door got all wavy-like. The next thing I knew, he was stretched out on the floor. My head felt like it was going to explode. All I could think of was getting away. Something was coming.

The pain was so bad that I forgot about Riddles and fumbled with the dead bolt. The door opened, and I fell on my face. Crackling and popping sounds echoed up the stairwell. The concrete cracked, walls were crumbling into sand.

I heard a voice—maybe it was more like a feeling than a voice. This was a cold, lonely, and very upset feeling.

I took the steps two and three at a time—fifth floor, sixth, seventh—through the last fire door and on to the flat asphalt roof. I ran to a parapet looking for a fire escape. The building lurched, almost sending me over.

I thought about a giant brain that had grown without any restrictions, without senses. No duties set by language or custom. The damn thing had no limits—it was just pure thought—maybe struggling to discover its purpose.

The streetlights went out. The rumbling in the building stopped. The stars jiggled for a second. Then they all disappeared. I floated in pitch black, surrounded by complete silence. Then that lonely feeling came back and I heard a voice like a bell got rung in some humongous church.

Time to start over.

‘Please turn on the lights, Jimmy.’

I waited a moment longer for effect, and then flicked the switch. ‘Let there be light.’

The laughter from the class filled me with joy, as did seeing the other children’s  wide eyes, their grinning faces. Miss Molly, our teacher, sat back down at her desk, and thought about what she was going to prepare for dinner tonight.

Human senses were a delight. I could see and feel so much now .

Even with the fluorescents, the classroom felt a bit confining. A few windows would fix that. Of course, that meant bringing up a sky with a sun and a whole bunch of other stuff .