The Eye of the SF Inspiration Storm – Rosie Oliver 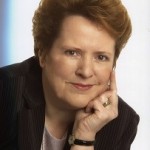 While I am in this ‘calm’, my writing really is in the doldrums. Nothing wants to find its way onto the page for fear I’m taking the plot on yet another tangential ride or that it turns into a plot idea that has been done all too well and published widely by the great science fiction writers. Yes, I’m still working out what the main plot line is. It’s kind of nibbling at my brain, but won’t articulate itself. All I can do is sit and wait for something to hit my conscious thoughts. I know from experience that when that happens, I will by typing on hot keys (kept that are tapped so often they actually warm up).

But I hear some writers ask, ‘how do you get the inspiration in the first place?’

Several years ago I worked out four basic rules for encouraging inspiration (and yes there is a very long story behind that, which I’m not going to go into here). At the time I produced the summary slide below. 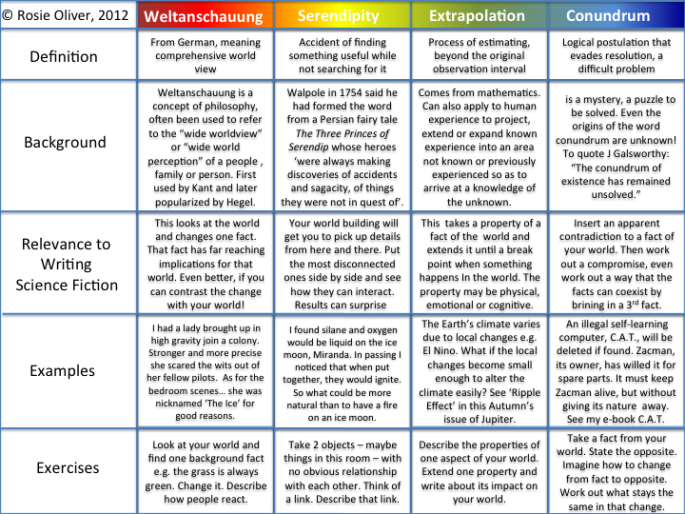 What does is the ability to mix, match and compound these mechanisms. And once the author has got into the habit of darting about between these mechanisms, the ideas do not stop coming until the point you need to put some structure or order on them. And we are back to the eye of the inspirational storm – it is the taking all these ideas, picking the important ones and working them into the story line.

Of course flash stories only really have room for the one idea, which is why the table above is so good for inspiring the flash and shorter short stories. But non-literary science fiction stories about around about 3,000 words are likely to require command ideas to give it the ‘sense of wonder’ that every science fiction author dreams of writing. And as for novelettes, novellas, novels, trilogies etc, the inspirational storm needs to be bigger and more ferocious. And believe me, such storms can take it out of you.

Which is why when you look at the great science fiction writers of the past, you find that only one or occasionally two of their worlds keep being talked about.  With Asimov it’s the Foundation series and the robot series, which he later combined into one world. With Frank Herbert, it’s Dune (his subsequent books never came up to the standard of Dune itself IMHO). With Arthur C Clarke, it’s Rendezvous with Rama and The City and the Stars. With Alastair Reynolds, it’s Revelation Space. With Robert Heinlein, it’s A Moon is a Harsh Mistress (a lot of his novels are based on his military experience and it shows). With Richard Morgan, it’s Altered Carbon. I could go on… but these novels all have the super-sense-of-wonder in their different ways, which takes time and effort for an author to build.

With commercial pressures of full time authors it is not surprising that they return to the worlds they built time and again. They don’t need to put that extra time and effort in for that extra inspiration. This makes me suspect that after their initial hit, which they wrote and pulled together over a long time, they are forced to trim their writing to concentrate on fulfilling publisher and reader demands, and the easiest thing to cut back on is that inspiration side of things.

So, as far as my short story is concerned, it’s back off into the storm shortly….