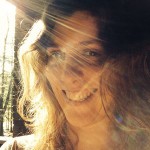 Juliana: Welcome Gwendolyn and Scarlett. So tell us, why the interest in horror, both as a reader and a writer? What first drew you into this particular genre?

Gwendolyn: Horror has always been part of my life. Both my parents loved horror, so we were always reading horror literature and watching horror films. So many people think of horror as something dark and subversive, but it seems the most natural thing for me as an artist. I’ve always reveled in my own weirdness, wearing it like a badge of honor since I was a child, and fortunately, horror is a great place for the weirdos.

Scarlett: I had the traditional, religious Southern upbringing, so I grew up with the idea that horror was well, “sinful”. I didn’t agree with that and I still don’t, but for a long time my access to the genre was limited. I didn’t start reading horror till I was in high school, and didn’t start watching it till I was over 30, so I’m making up for lost time here! Maybe for me it’s a belated rebellion. That said, horror is a great medium for working out frustrations and testing limits.

Juliana: The question you’ve probably answered a million times but we still want answered: where do the ideas come from? How do you imagine that lurking darkness while going about your daily life?

Gwendolyn: I’m a visual person, so small images often inspire me. A browned apple. A horseshoe driveway. A clawfoot bathtub. Out of those single images, I like to extrapolate and create a whole world with that focal point in mind. In particular when I’m writing horror or dark fantasy, I’ve found that you can extract a remarkable amount of the foreboding from the mundane. There’s so much darkness hiding in everyday life. All you have to do is look a little closer to find it.

Scarlett: Some days I honestly wish I knew! I get a few ideas from the daily news, or other things I read, or writing prompts on Reddit. But for a lot of my writing, ideas just show up in whole cloth and I often don’t spend a lot of time wondering where they come from. They have fangs and claws, after all.

Juliana: What do you usually build your stories upon? Is it a plot concept, a character, a feeling you want to evoke? How do you like to start out?

Gwendolyn: It often starts with a moment or an emotion. Maybe the way I feel when I hear a song or see a certain photograph or even how reading a specific story has affected me. From there, it’s my goal to capture that subjective experience, almost like putting a pin in a butterfly. What I’ll write tends to have little to no relation to what initially inspired it beyond a small symbol or an aspect of setting. When I start out to write a story, I usually have a general idea of where I’m headed, though I love to discover details about the characters as I go. It makes the act of creating a bit of a mystery when you’re able to learn about this world while you’re writing it.

Scarlett: For me, I usually start with a plot concept, a “what if”. I like to start with an ending, if possible–the whole process just comes together best if I know the end at the beginning. And sometimes, a character will just pop into my head and start talking. You can bet I’m quick to pin that person to the couch and start taking notes, because you can learn amazing things just by listening to that new inner voice.

Juliana: How can a horror writer avoid falling into worn tropes? Or is it more of a case of twisting tropes to create something fresh?

Gwendolyn: There are still so many aspects of horror left to examine, especially the emotional devastation that horrific scenarios can cause. As long as writers push themselves even a little bit, we can find new ground to cover. I’ve seen a lot of great concepts in recent short fiction, so whether a writer creates something entirely different (e.g. a new kind of a monster) or reworks existing tropes, there’s plenty of potential to explore human nature through the lens of horror.

Scarlett: We should always keep reaching. There are so many aspects of human nature that don’t get touched on nearly enough–let’s see more of the emotional/psychological facets of horror. Less gore/vampires/werewolves/zombies; those are getting a bit tired, especially in literature. (No offense to Walking Dead fans!) If you’re into monsters, the world’s mythologies are fulI of critters that haven’t been explored, that need to be dug out and brought to light. For me, the greatest monsters are humans themselves, and we’re still figuring ourselves out.

Juliana: Do you find – as a reader and as a writer – that there are fundamental differences when it comes to horror in short stories and in novels? Are there different expectations, limitations, or allowances?

Gwendolyn: I do think there are differences between short stories and novels. As a reader, I will admit that many horror novels fall flat for me, only because that sense of dread can be hard to sustain through 80,000+ words. However, when I find a horror novel that does work well, it’s truly transcendent. For example, I love Shirley Jackson’s longer works—The Haunting of Hill Houseand We Have Always Lived in the Castle. Although short stories will probably always be my first love, a great horror novel is seriously worth its weight in gold, and the reader has the opportunity to learn so much more about the setting and the characters that inhabit it. With short fiction, which is where I have the most experience as a writer at this point, the author is challenged to craft an entire world in a very limited space. So both mediums have their advantages and their drawbacks.

Scarlett: Obviously with a horror novel you have more room for character development and more time, so to speak, to play with those extra little details that make characters memorable. In short stories, you’ve really just got one chance to get everything across because of your word-count limit. At this point I’m entirely a short story writer, and that format really tests your ability to be clear and concise. Your margin of error is tiny. With novels there’s the very real problem of keeping up your pace without lagging, and without giving too much away too early–nothing peeves me more than being able to see the ending coming before I’m halfway through the book.

Juliana: Religious tales, folk stories and mythologies are full of violence and the threat of darkness. Why do you think there is such a deep-rooted fascination with evil and horror? Why is this a genre that endures and flourishes?

Gwendolyn: Human beings will always experience fear. It might be the fear of the dark or fear of death or fear of the outsider, but no matter what, we’ll always have something to dread. So that makes horror at once universal and timeless. Across cultures and across centuries, we share that common experience. That’s why you can read ghost stories from the Victorian era or monster tomes like Frankenstein and still relate to the material. Obviously, good writing plays into it as well, but it’s also that universality that keeps us coming back.

Fear is such a universal, primal feeling–Lovecraft called it “the oldest and strongest emotion of mankind”–and yet, oddly enough, it can be fun to be frightened. Our brains get some kind of kick out of it. And to that end, horror works really well. You get to explore actions and feelings you’d never remotely consider in real life. You get that jolt of adrenaline, that vicarious thrill, but none of the consequences.

Juliana: To finish up, a bit of fun. Which are your favorite fictional scary creatures? Can be from literature, movies, TV, graphic novels, or any other.

Gwendolyn: I’m a big fan of ghouls. There aren’t nearly enough stories about them, though I love the ghoul segment from the 1980 Vincent Price movie, The Monster Club. And I’ll also give Scarlett a shout-out here and recommend everyone check out her ghoul story, “The Tomb Wife,” in Zen of the Dead. It’s one of the best stories I’ve read in a long time, and she does a fantastic job of exploring the nuances of the ghoul character as well as the world in which the ghoul resides. Great stuff, and very creepy.

Scarlett: Awwww, I love you too!

My personal favorite single character is Cthulhu–but he’s been exploited so much he’s not scary anymore, at least not to me. It takes a lot of work to portray the Big C convincingly. In terms of creature types or classes, I love cryptids. Even though none of them are proven to exist (and some have been explained or disproven), that element of the unknown, of “heeey, this just might be possible,” can be deeply unsettling.

Juliana: Thank you so much for joining me here and giving us a deeper glimpse into writing horror!

Find book reviews and blog posts on writing and publishing at Scarlett R. Algee’s website, scarlettralgee.wordpress.com. Scarlett tweets as @scarlettralgee. For her jewelry designs, check out Copperwalk Designs on Etsy.

Visit Gwendolyn Kiste’s website – gwendolynkiste.com – for further information on her work, as well as blog interviews, news and posts on writing. You can find Gwendolyn on Twitter @GwendolynKiste and Facebook.