The Courage of Care 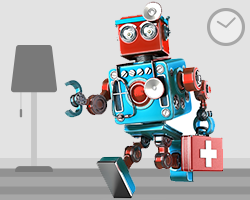 My workday was unusually frustrating: more robo-carers needed urgent repairs; human carers asked for more help for clients whose condition had worsened; and the turnover of contract carers had gone into a spin with so many colds and flu bugs about. But I was managing, just.

And I had to develop that app to help wheelchair users have a bath on their own. This required real peace and quiet to get the ‘alter a bit here and tweak a control level there to bring it together’ right. Something I planned for the evening.

My auto-aide announced a surprise visitor.

He walked into my office in the full dress uniform of a civil servant: black bowler hat, navy pinstripe suit, white shirt, walking-stick umbrella and battered leather briefcase. The handkerchief sticking out of his breast pocket warned me he was a high ranker. This was turning into an awful day.

I forced my number three smile normally reserved for my most awkward customers, stood up and offered to shake his hand. ‘How may I help, Mr … ?’

‘Fortescue-Smythe. Policy research at the Cabinet Office.’ Instead of shaking my hand, he pulled out a card from his wallet pocket and handed it over. ‘You may wish to independently verify my identity.’

One glance at the hologram’s top right corner, which morphed from St Edward’s Crown to the door of Number Ten, was enough. ‘No need. What can I do for you?’ I put the card aside as I sat down.

He fished out a flexi-sheet and stylus from his briefcase and placed them in front of me. ‘Before I can discuss the matter, I’m obliged to ask you to sign the Official Secrets Act. This flexi-sheet will monitor your eye movements to ensure that you have read every word, before it will accept your signature.’

His face was implacable. This was going to be far worse than awful. The easiest thing would be to refuse to sign, but I had heard stories pointing to this being the wrong decision. ‘Please take a seat.’

While he made himself comfortable, I read and signed the flexi-sheet. My computer, which was also running the business-recoding app, immediately shut down. I glowered at Fortescue-Smythe.

‘Don’t worry. A necessary precaution. All your files will have been saved. Your computer will switch on once I leave with the flexi-sheet.’

‘This doesn’t surprise me, or you would be paying out loads in compensation.’

‘How much would you be willing to sell your business for?’

The question was so out of the blue that I gawped. I fumbled back to being businesslike. ‘That depends on what the government wants to do with it. I have a duty of care to my employees.’

‘Very commendable. They would maintain their current terms and conditions for the mandatory two years. Then they would transition to the government’s, in many cases improved, conditions.’

That told me they had done some serious homework. I went into automatic poker face routine. ‘You already know what my company is worth.’

‘What are you willing to pay above that for me to leave quietly?’

‘I am authorised to say two percent.’

That statement inwardly freaked me out. Government mantra had always been: ‘Get value for money’. Something significant was about to go down. ‘If I refuse?’

He smiled. ‘Proposed legislation would recompense you ten percent below its value. However, by that time, we anticipate its worth would be considerably reduced.’

Blood drained from my face. Whatever they had in mind was big, really big, and they felt certain the voters would back it. Nationalising the care services must be the tip of the iceberg. ‘How are you going to encourage recruits into care? Robo-carer innovations are only just keeping pace with ever-increasing demands.’

‘There are a lot of job-capable unemployed, especially among the untrained. The proposal is once they’ve been unemployed for three months, train and guarantee them a caring job. If they then leave, they are deemed to have voluntarily resigned.’

Blatant conscription of the unemployed into the caring sector!

My mind reeled under the ramifications. The government was out to reduce costs, starting with less being paid out in unemployment benefits. Later on, it would profit from offering care services to foreigners willing to come to this country and pay. My firm, with its robo-carer improvements that reduced the number of care workers needed, was the fly in their ointment. ‘Can I have a couple of weeks to think about it?’

‘Of course. Remember you have signed the Official Secrets Act.’

He left me to sort out my backlog of work frustrations.

My mind kept being drawn back to the nationalisation of my company. I cared about what happened to my workers and how my robo-carers were used. Yet the Official Secrets Act tied my hands.

I cleared my desk and worked out what I could do.

The list turned out to be long. I went into my ‘alter a bit here and tweak a control level there to bring it together’ design mode. One workable answer popped out, but it led to a knife-edge situation that could lose my company. Courage was what I needed.

That evening I had a drink with Josh at the pub. I finally got round to moaning about the cost of new government regulations for robo-carers. His reporter wife would go digging.

Next morning, I asked my financial adviser to value my business for sale, citing the same reason. He would circumspectly talk with influential behind-the-scenes people at his club.

Then I asked the health and safety office if they had a copy of the new regulations yet. They would make enquires of higher-ranking civil servants and politicians.

Two days later, the caring industry’s share prices dropped because of worries about new regulations. The following day, tabloids published articles about proposed government regulations adding more costs to care. Next morning, a parliamentary committee announced an enquiry into whether more regulation could deal with the extreme range of individual requirements and how to keep care workers motivated.

This political spotlight alone would stop the government’s nationalisation in its tracks. I could go back to ignoring the rest of the world and develop that app for the wheelchair users.