The Twelve – The Bull 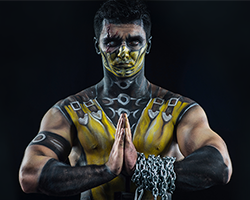 Blood bubbled up to my throat. I spat it out. It wasn’t blood. It was bile mixed with mucus. I thanked the gods. No internal injury. But the pain – the pain still pumped through my body.

I took a breath and tried to keep the hurt at bay. My heartbeat played in tandem to the crowd’s chants.

Anger began to take over from my pain. I despised this. These people. This bout. This life.

I despised my life. Everything about it.

No. Not everything. Not my wife, dead though she was these many years. Her memory. I did not despise her memory.

My two opponents were circling either side. The other combatants had left us to it. The lion man was weakened from my attack, but his need for revenge kept him upright. The crab, his one remaining claw held aloft, was equally intent on my demise. But neither could move without ceding advantage to the other. I almost laughed at the ridiculousness of the situation.

I did not despise my two soon-to-be killers. I had more affinity and admiration for them, than for that chanting rabble in the stalls. I forced my head upwards to look at them, they were but a blur. My eyes were failing.

The lion let out a roar, but it did not have the power of before. The crab knew it, and so did the lion man himself. He was a faker, the lion. Just like me. Just like all showmen. The crab clicked his one claw menacingly and waved it into the air. The crowd cheered in response.

The circus must go on.

Maybe I could still get out of this. Maybe the crab – or the lion – yes, the lion, he was reckless enough – maybe they take each other on, forget about me. I swear to all the gods, if I got out of this–

A chunk of blood-covered mucus flew out of my nostrils and hit the ground with a slap. Both my opponents saw it. So did the crowd.

It was just a game. It was all just a game. My life. This life. All life. We played it. Fast or slow. High or low. It didn’t make any difference.

But it did. My life was forfeit from the get-go. A freak, created for the use of others. For their distraction. For their pleasure.

And now they were tired of us.

This realisation hit me hard. That’s all this was. An extermination show. I raised my head up.

The crab man raised his other arm into the air, the one with a stump from which I had earlier so ruthlessly removed a claw. “Yes, bull, we do.”

I looked to the lion man. He shook his head. “I didn’t expect cowardice from you, bull –

“You don’t understand. We’re all victims here. All of us. We’re nothing to these people. Nothing but chaff, to be thrown onto the bonfire.”

“Speak for yourself bull,” the lion man said. “I’m respected. I make a good living. I chose this life. So did you. So did we all. Can’t cop out now just coz the going gets a little rough.”

I looked away. I understood. I would have said exactly the same thing not so long ago myself.

A gong sounded. The emperor was on his feet.

“Citizens of Empire, I give you Fire!

I looked at my fellow combatants. Their faces held the same expression. Was that crazy little cretin going to incinerate us?

A series of poles with nets suspended in-between rose up from the top of the arena panels. The netted poles pushed towards the sky, then began to curve inwards, meeting in the middle, locking into a dome-shaped mesh.

Two huge panels slide open. A whirring noise sounded, then a gush of air pumped into the domed arena. The air was red. Not with flames, but with ants. Fire ants. Millions of them. The two panels clunked closed.

The ants were everywhere. I glanced around me. This was fire? I was about to utter a mocking obscenity when a series of clicks sounded. Around all of the panelled walls of the arena small spouts appeared. They spat a white spray into the air. It smelled sickly sweet, like fruit left to swelter in the sun.

A thousand mouths bit into my flesh. A thousand nerve endings screamed into my brain. I open my mouth to release an anguished roar, only for it to be filled with more ants. In seconds my tongue and throat burned. This was fire like no other.

I grabbed handfuls of sand and shoved them down my throat. Maybe I could suffocate the tiny monsters. But it made no difference. They were everywhere. My nostrils, my ears, my eyes. I heard the screams of others.

What a way to die. Death by a thousand cuts. A figure loomed before me. A cool sensation covered my entire body. The biting stopped. I recognised her – the water-bearer, Aquarius.

In the distance I could see the lion man. He was roaring out in pain. The ants had targeted his back, where my two horns had made an opening earlier. I grimaced. The water-bearer spoke.

I nodded. Nearby the crab man was hitting his one large claw off the hard dirt, trying to dislodge the ants which had managed to crawl in under it. The rest of his body seemed immune.

I fell to the ground. Despite the temporary relief, I knew I was at an end. My day had come. I looked over to the crab. He caught my look, and nodded.

He dislodged the last of the pests from his claw and walked towards me. I gave a faint smile.

I would die a warrior.