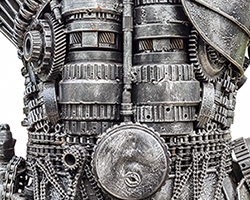 Once she triggered the static pulse and killed the electronic security measures, Lady Mella’s personal guards would be all over the ninety-eighth floor ASAP, not to mention the hotel’s private security.

Hawthorn had been provided with Mella’s itinerary by Agent Stewart after the deal they’d made, a necessary evil when Interpol caught her in Prague trying to sell the mythical Isabella Stewart Gardner Thirteen.

“We need a solar-class art thief with no nanos—one hundred percent human—for a job,” he’d said, smirking across the cheap plastic interrogation room table. “And you don’t want to spend the rest of your life in a penal colony on Europa. So, what do you say?”

Five days later, she was a maid at Boston’s Hotel Buckminster.

The gig had let her chat up one of Mella’s guards in the hotel bar, where she’d kept him distracted enough to rip a copy of his security code for the private lift.

Now she was riding that lift, alone, in her maid’s uniform, watching the seconds tick away on her silver Dent pocket watch.

Mella and her entourage were about to leave for a tour of the city’s canal system. They’d be standing outside, watching their boats and security escorts arrive when Hawthorn triggered the pulse. As soon as their grid fell, Mella’s security would know, and they’d come running back inside to summon the antiquated lift which, Stewart had assured her, would continue to function. Covering one floor every point-six seconds, it would descend ninety-eight floors before climbing back up.

That was Hawthorn’s window. Tighter than she would have liked, but Stewart was adamant—the Agency wanted Lady Mella and her crew to feel like the job had been partially botched, wanted everyone confused and under maximum stress.

She opened her satchel and pulled out the small, seamless polycarbonate cube containing the pulse generator. Stewart had also provided her with a priceless leather-bound book—The Left Hand of Darkness, signed by Le Guin.

She placed the cube on the floor, touched the switch, and sidestepped out of sight. The doors opened. The cube turned green. There was a symphony of hissing and thudding sounds.

Hawthorn picked up the cube and walked out. Stepping around a half-dozen bricked drones, she approached Lady Mella’s suite.

She reset the pulse, pointed it at the door, and fired. Then she stuffed the device back in her bag, and gripped the brass door knob. It spun easily: its concealed biometric locks as dead as the drones behind her.

She threw open the door and froze.

Standing just inside, gun arm extended, was a seven-foot-tall man-shaped clockwork nightmare, its two ocular sensors the shade of dried blood. Hawthorn hiked up her skirt, removed a telescopic rod she’d taped to her thigh, and jammed it into the monster’s geared knee-joint, just in case.

One minute and thirty seconds.

She ran across the cherry living room floor, past an authentic Paul McCobb sofa, trying to ignore the ticking of a museum-quality Howard Miller grandfather clock.

Inside the master bedroom, Hawthorn strode into the walk-in closet and started ripping gowns and suits from their hangers. Next, she went to the ornate Chippendale high chest and tossed its drawers.

She did the same to the Federal nightstands, only stopping to replace Lady Mella’s copy of the Le Guin book with the one Stewart had given her.

Finally, bolting over to an exquisite Winslow Homer, she gritted her teeth and pulled it from the wall, revealing a concealed safe with smoldering electronic lock.

Inside was the Northstar, an enormous one-of-a-kind diamond—the first to be mined from an asteroid—resting in a platinum prong setting strung to a necklace of Martian gold. She tossed it into her satchel with the book and withdrew a plastic test tube containing one gram of microscopic listening devices.

Sprinting for the living room, Hawthorn scattered Stewart’s bugs to the air as she heard the whine of rebooting servos and saw the automata shuddering to life.

The robot got off three quick shots as she dove behind the sofa; then it crashed to the floor, betrayed by its compromised knee. While it struggled to remove Hawthorn’s baton, she shrugged off her bag. Burning circuitry wafted up through a charred hole in the fabric. Inside, the cube was dead, leaving her with one option.

With a roar, Hawthorn shot to her feet, took two steps, and launched into a forward roll over the sprawled machine. Flying out the door, rebounding off the wall, she could hear the robot whirring and clicking just behind her, shifting around.

She sprinted away from the lift which was only seconds from arriving, and shouldered her way through a fire door, setting off an alarm.

In the stairwell, she could hear feet, lots of them, marching up from below. Heart pounding, she climbed three flights. On the roof, Stewart was touching down in a small, sleek helicopter, its rotors thrumming. With Hawthorn aboard, Stewart lifted off, climbing away from the pursuing guards. He flipped a few switches, and the sound of the rotors vanished.

Stewart smiled. “And the bugs?”

“Done, though I don’t know why you bothered. They’ll decon everything. Hell, she’ll probably change hotels and abandon her whole wardrobe. None of those expensive nanomikes are going to get you spooks anything of value.”

Stewart’s smile widened. “The theft of the Northstar is an obvious enough ruse, and her team will suspect an espionage attempt with the trade negotiations next week, so yes, they’ll decon everything Lady Mella lets them. Some antiques don’t respond well to such treatment.”

Hawthorn chuffed. “You bugged the book.”

Stewart nodded. “It’s a bit more than a bug, but the details are above your new paygrade.”

“Come on, Hawthorn,” Steward said. “You knew this wasn’t just a job.”

“You were testing me?”

“Think of it as more of an interview. The Agency can always use a good thief. What do you say?”

She shrugged. “Does it matter?”

Stewart laughed. “Already thinking like an agent. Welcome to the team.”