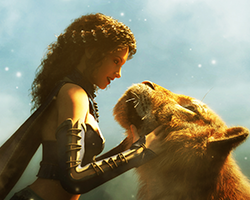 Hear my prayer, Lady, and remember me, your little mouse. You sent your priestess to free me from my cage …

Girl whispers the words to herself as she rides a water buffalo home from the steep terraces of the rice fields. Many, many days have passed since the goddess made the promise, but Girl knows she will keep her word.

But how will she come? In a chariot, drawn by white buffaloes? Riding a great golden yak? Or a tiger? Yes, a tiger. And the goddess will let it eat Naala.

Girl has more weals on her back and legs nowadays, as Naala finds any excuse to lash out with her bamboo cane. For Aprakash has gone, and not to his auntie’s. Gone without the golden horn-caps, but Girl is sure he’s taken other things, for Naala has spent hours searching her coffers, sometimes weeping that he’s left her, more often cursing his name.

The village gossips think he’s gone for good. Girl hopes so. The goddess said not to fear his threats, but Girl does fear, and she repeats the goddess’s promise over and over to herself like a holy mantra.

She’s still repeating it when she reaches the village and finds everyone gathered by the peepul tree, though dusk is falling. A ceremony of welcome is ending, with discarded bowls of rice wine, and empty plates which once held meat, fish, lentil cake and egg. The Elders – including Naala – kneel before a woman who is dressed in saffron robes embroidered with a silver weighing balance. Behind her stand two guards wearing hard-leather armour and carrying weapons.

Girl slips from the buffalo and moves closer.

“Again, welcome, honoured one,” says the First Elder. “I beg my impertinence be excused, but since we have no need of a priestess of the Lady Giver-of-Judgements, may I now ask your purpose here?”

“I seek the girl known as Little Mouse.”

“None here bears that name.”

Girl can hardly speak for excitement. “Me,” she stammers. “It’s me.”

The priestess smiles and raises her hand in greeting. On her palm is a scar shaped like the balance. “I am here to take you to the Monastery of the Lady.”

“No!” cries Naala, jumping to her feet. She reaches to grab Girl, but the older guard is suddenly there, standing between them.

“She’s mine,” says Naala. “Held in debt-bondage. She can’t leave, not unless I’m paid for her.”

“You are Temple Elder?” asks the priestess.

“I am.” Naala holds up the proof – the amulet-seal she wears.

“The Statute of Slavery Abolished forbids Temple Elders from entering into or holding debt-bondage contracts. An old law, rarely enforced. But enforce it I shall. If the child is yours, and you cannot reimburse all sums paid under the illegal contract, your life is forfeit.”

Naala pales in fear. Girl is torn between shock and hope.

“A slip of the tongue, most honoured one,” says Naala. “My father entered the contract with the child’s grandfather, and when I married, assigned it to my husband. At my husband’s death, it passed to our son. I merely administer it until he comes of formal age.”

“You can prove this?”

Naala scurries to her house and returns with a bound scroll. The priestess unrolls it, reads, rolls it up again.

“Your price to redeem the bond?”

“This is preposterous. These sums …”

“Are correct,” says Naala. “Additional loans to the grandfather and father, interest on these and the original debt, and the cost of feeding and clothing the girl since her father’s death.”

The priestess stands, stiff with anger. “First Elder, I accept the hospitality of your home tonight.” She turns to Girl. “I’m sorry, child.”

Naala smirks as the priestess walks away, but the guard leans close to Girl. “Never fear, little one. The Lady wants you. And what the Lady wants, the Lady will have.”

In the byre, alone save for her beloved animals, Girl nestles between the buffaloes and weeps. “The goddess came for me,” she tells them. “But Naala’s won.”

“Not yet, she hasn’t,” says a cool voice in her ear, and Girl’s heart leaps. “My priestess gives up too easily. I think Naala’s hiding something – go across to her house, let’s find out what it is.”

At the house, Naala’s gossipy neighbours are leaving, but Rasna, the chief gossip, remains. “Congratulations again, my dear Naala. It was splendid, the way you thwarted that interfering priestess. What business is it of hers who owns the girl? And to make threats against you. Disgraceful. So lucky you could prove your father bought the contract. But my dear, wasn’t your father a Temple Elder in that town you came from? I’m sure you’ve told us so often enough. Naturally, I won’t say anything, but can everyone be trusted? And wasn’t there an amulet-seal among the trinkets by the god’s feet when he called the horn-caps to himself last month? You removed everything so quickly – for safekeeping, I’m sure – but it was seen. Your father’s temple seal? A lovely keepsake, but incriminating, perhaps, if the priestess has a search made.” And with a cheerful “Goodnight, dear.” Rasna walks away, smiling broadly.

“So that’s it,” says the goddess. “We shan’t wait for someone to have a fit of conscience, little mouse. Tell my priestess what you’ve heard. The amulet-seal will show when Naala’s father was appointed Temple Elder, which we’ll check against the date of the debt contract. And you’ll be free.”

At that moment, Naala hurries from the house.

“Go after her,” says the goddess.

The moon is high, and Girl easily follows Naala through the village to the lake, where Naala scarcely pauses before flinging something into the waters.

“The amulet-seal!” cries the goddess.

Girl knows the lake well. She brings the buffaloes here to drink and helps them scrape their mud wallows. It holds no terrors for her, not even at night. She throws herself after the amulet-seal.

“It’s too dangerous,” says the goddess. “Turn back.”

But Girl doesn’t. She knows where the seal fell and paddles towards it, though Naala is screaming curses at her.

Girl takes a deep breath and dives. She can see nothing, but she feels along the lake bottom. She surfaces, takes another breath. Naala has stopped screaming, but villagers are gathering with lamps and torches.

“We need light,” says the goddess. And light comes – the older guard approaches on a raft-boat, carrying a lamp.

“There, a gleam,” says the goddess. “To your left. A little further.” Girl’s fingers clasp a smooth cylinder. She surfaces, holding the amulet-seal high. The guard pulls her onto the raft, wraps a blanket around her.

At the lakeshore Naala is on her knees, weeping. The priestess stands beside her, waiting.