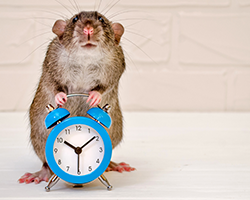 It was easier than I thought to teach Albert to run up the grandfather clock on command but much harder to get him to come down again at a decent speed.

“Don’t overthink it,” I coaxed, as the mouse scurried along the split pediment at the top and peered over the edge to the almost straight drop to the floor. “Just run. There will be cheese for you at the end of this.”

The mouse stood up on his haunches and wrinkled his nose, whiskers twitching with dismay. “I don’t care for cheese,” he said. “If I’ve said it once, I’ve said it a thousand times.”

“And I don’t care for this attitude. When I send you out the window with my message for help, I need to know you’ll be able to get down before any alarms go off. If you’re captured and poisoned, I’ll be trapped, and you’ll be just another dead rodent. I’ve spent months on your training …”

Albert’s cheek pouches bulged with anger. “Is that what I am? Just another pest to kick away once I’ve served my purpose?”

I paced around the cold room that was also my prison. “Sorry, Albert. You’re not just another anything. But it took me months of practice and luck to find a mouse who could be woken to talking with my magic. I’m not sure I could do it again. Time is running out.”

“Head chopped off,” I agreed. “I simply can’t be allowed to live with this much power flowing through my veins.”

An accident of birth that I was expected to take responsibility for. Tested and found to be ‘dangerous’ before I’d done anything with it. Rewarded with imprisonment until death. If I’d been rich, they’d have sent me off to college, but the folk in charge of the city of Delturn hated the poor and powerful even more than the merely poor.

Footsteps sounded, loudly travelling up the staircase outside my chamber. Albert and I froze, but there was no time to hide.

Mistress Barbadle unlocked and opened the door. “There’s a gap in the schedule,” she said. “Your execution’s come forward.”

One sentence was all it took to dismantle my plans. There would be no time to send Albert out to find the insurgents. I was doomed. Unless …

I put my palms together and tried to pull magic from the air. A last-ditch attempt that almost certainly wouldn’t work.

And it didn’t. Nothing happened. Damn it.

There were spells of protection on all the rooms. I could magic a mouse, maybe practice my skills a little, but unleashing anything at a human (or the walls) was impossible.

Barbadle sneered. “Why do you keep trying, fool? The entire building is protected from idiots like you getting bright ideas.”

Then a small thin voice spoke out. “Protected from me?” Albert asked.

He swung from the top of the grandfather clock down to the clock face, using his tail for balance. He placed his paws on the minute hand and squealed as he changed metal into magic, before landing on the floor. Whatever wards were in place had overlooked rodents.

Barbadle’s face turned purple with anger. “What is that?” she yelled.

Albert turned and held a single paw towards her. Yellow lightning curled out from the tiny creature, lashing out at our enemy. Barbadle melted before she could scream.

And I … I was speechless. I’d spent months working on my own powers, but Albert had never done anything but talk and run for me. “We should dash,” I said eventually. “Before anyone else comes.”

Albert faced his palm to the window and it exploded in an orange burst, leaving a gap big enough for a whole team of men to climb through.

I clambered down the rubble, and Albert followed, shuddering from his efforts. Snow began to fall around us.

At ground level, I stared down at my mouse companion in wonderment. “How did you do any of that?” I’d been trapped in a tower until the end of my days because I had ‘too much power to be allowed freedom’, but he was merely a bystander. An invisible inhabitant of 84 Harper Street. No one but me even knew he existed.

“I watched you. As you trained, you became my teacher. I merely extrapolated.”

“You’re better than me.”

Still dazed and confused, it was time to go our separate ways before we got caught. We’d agreed long ago that if Albert helped get a message to my would-be rescuers, we would both have our freedom and I would never call on him again.

We’d been forced together – a relationship borne out of necessity. He wasn’t a pet, and I didn’t think he’d call me a friend. There was no need to stay together after this. By turning into my liberator, he’d more than fulfilled his part of the bargain.

I let him crawl onto my hand one last time. I held him to my face and nestled my cheek in his warm fur so I could hear his fluttering, shaky heart. “Thank you,” I said. “Where will you go?”

“I don’t know. My mother lived and died in this house, but I must have kin out there. Hundreds of them in this very town. But will they be able to talk to me? Will they even listen?” His voice was small and sad.

I put him down onto the cobbled street. “Will you be able to find me if you need to?”

He nodded, as much as a mouse can. “You have a very strong odour.”

I let him scamper away into the wintry day without further ado. Then regret took over. I began yelling, “Albert! Albert!”

It was another long minute until he reappeared, tilting his head inquisitively. “Live with me,” I said. “Teach me. Help me stay out of trouble. We both need friends.”

Albert nodded once more, and we walked away together this time.

Across town the church bell rang. It was one o’clock and freedom was calling.