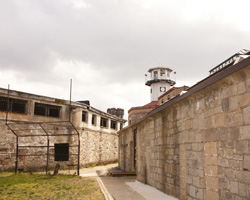 Pain erupted as the ibulex burned through my veins. Accelerating when it reached my heart, the drug fired into my arteries like a sling shot; an inferno deep inside my chest. When the agony subsided I saw from the deep impressions left by the restraints that my body had fought on even when my mind was helpless.

Now I sagged, drained. The fire still burned, banked coals throughout my body which could be blown to life at the slightest touch. Even in the warm release-chamber sweat cooled on my skin, leaving a trail of goosebumps behind. Breathing gradually became easier, each breath reassuring me that the worst was over, at least for now.

Voices in the background, a drone which slowly resolved itself into the magistrate reading out the conditions of my release. My exhausted mind wondered if it had been worth it.

I was given civilian clothing, the sort a tramp from the ‘forties might have owned. It had been worn before and came with its own ecosystem of lice and fleas, its own atmosphere of stale body odour. I told myself it was better than being naked and my flight suit had been damaged beyond repair during my capture.

The walk from the detention block to the main gate was an exercise in endurance; cat calls from every shielded window as the entire prison population poured their hatred out at me. I was being released while they still served life sentences, but it wasn’t jealousy that drove them: I had been the most hated prisoner in the facility, in solitary confinement for the last seven years just to keep me alive. Even then there had been attempts on my life. I smiled.

The guards in formation around me were mechanicals because the governor knew human guards might decide to take matters into their own hands and kill me – mechanicals just carried out their programmed duties. I just hoped no one had reprogrammed them: they’d make efficient assassins.

We reached the guardhouse without mishap but the grating of the security door set my raw nerves on edge. Yawning darkness lay beyond. One of the mechanicals pushed me and I was part way into a defensive crouch before I realised it was just encouraging me forwards. I stepped inside and the door slammed behind me.

“You’ll be dead before the sun sets, woman,” a voice from the darkness taunted.

“And if you survive until night, you’ll wish you hadn’t…” a second voice added. I didn’t flinch. Both voices had the slight tinniness of speakers and the dead air space told me I was alone.

“If you break the conditions of your release,” added a third voice, cool and dispassionate, “the ibulex will activate in your bloodstream, terminating your existence. The pain you experienced during administration will be a flea bite compared to the pain of your death.” I nodded, knowing I was being watched even though I could see no one.

“On the bench to your left you will find your belongings,” the voice continued dispassionately, “except for the weapons.” I reached out with my left hand, finding the bench and feeling around until my hand met the small pile of stuff they’d found on me. I concentrated on keeping my breathing even as I identified each object by touch. I couldn’t risk them knowing how important one particular item was to me.

My wristwatch, an antique from the twenty-first, a locket, my belt, purse with photos still inside and smokes, useless now after all these years. I quietly pocketed everything then waited.

“The door release is at waist height in front of you.” The cold metal was closer to my face than I had realised. I ran my hand down it carefully, wary of traps even now, until I found the contour of a button. As I pressed it a sliver of light began at floor level, lighting up my feet, widening to a bar which showed my legs, thin and dirty under the grey skirt. The harsh glare of sunlight made my eyes sting with unshed tears, but I was already diving into a forward roll before the door was halfway up and then I was away, dodging from side to side, a target in a shooting game. I felt more than heard the bullets ripping through the air all around me. The street was empty apart from me – word had got out and decent citizens were in their own homes behind locked doors, waiting for someone else to finish me off.

I didn’t get away unscathed, because I’m not a super-hero, but the adrenaline in my system had me so wired that I was barely aware of the wounds as bullets tore into my flesh. Seven years in solitary isn’t the best training for a run like the onethat day but desperation is a great incentive. When I found myself in populated streets I stopped running immediately and adopted the slouch of a vagrant trying to avoid a kick.

It wouldn’t keep me safe for long, because they could track me by the ibulex in my blood, but I didn’t need much time. Behind me commotion erupted as shooters broke cover. Their next step would be to fire in the airso everyone dropped to the ground, then I’d have two choices: run and be shot in the back, or drop with everyone else and wait for them to put a bullet in my head.

I did neither. Instead I swiped my thumb over the genetically coded transporter set in the lid of the packet of smokes.

I was surrounded by the blessed cool of my own ship, but instantly the ibulex blazed fire through my bloodstream.

“Initiate emergency transfusion!” I screamed, body writhing even before I hit the white deck. The ship was built from my cloned cells: she was a part of me, the other half of my soul, speaking with my voice. She would be feeling my pain.

“Emergency transfusion denied,” a dispassionate male voice replied, a voice I had heard not half an hour before. As the blackness of oblivion pulled me down the full horror began to dawn on me: they had never planned to let me escape alive. They had murdered my beautiful ship and now it was my turn.