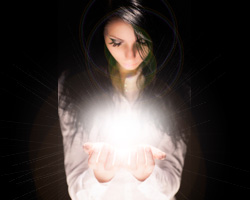 Dora had hoped to surprise Chris after her lessons but instead of bursting into the staff toilets, she lingered outside listening to his voice as he laughed and joked with another of the janitors. She leaned close to the door, knowing she shouldn’t really eavesdrop but she had heard her name. Twice now.

Both men laughed and Dora sucked in a breath. She clenched her fists, digging her nails into her palms. There was the scrape of a metal bucket across the floor and Chris’s voice came closer to the door.

“You seen that mate of hers with the fat arse? I’d love a go on that.”

Dora turned and marched down the corridor, quietly fuming. People winced and turned away as she passed, blinded by the light coming from her body. She didn’t care to control it. Screw them – she just wanted to get back to her room and scream into her pillow.

She’d almost made it when somebody snatched her arm and pulled her into a room. Mia’s bedroom, she quickly realised, and Mia and Con shielding their eyes before her. Dora made no attempt to relax.

“What do you want?” Dora asked again. “Whatever it is, I’m not in the mood. I’ve just found out my boyfriend’s like, a total scumbag!” She noticed the look which passed between Con and Mia and, frowning, she controlled her power just enough for them to see easily. “What? What’s that look about?”

“We’re going to find Paula,” Con said. “But we need your help. And uh… we might need your scumbag boyfriend.”

Dora sat heavily on the bed and snatched up one of Mia’s cushions, hugging it to her chest. “You can have him. Wait… what do you mean, ‘find Paula?’”

Mia peered out of the room and into the corridor before closing the door and joining her on the bed. “We think—”

“Think,” Mia continued, “that Paula’s still here. In the facility.”

Dora rubbed her forehead. She couldn’t think about all this now. She needed to confront Chris and let him know how much he’d hurt her. “What do you mean?”

“There’s an area underground, a basement,” Mia said. “And I think—”

“You mean you know.”

Mia glared at Con. “Just shut up a minute, yeah?” She turned back to Dora. “I think they keep girls there instead of letting them back out into the world. And I think Paula’s there.”

Dora was starting to get a headache now. She shook her head. “I don’t understand. Paula’s underground? Why do you want Chris?”

“I dunno, lure him into bed or something and then swipe them when he’s all shagged out.”

“I’m never sleeping with him again!” Dora got to her feet, indignant, and chucked the cushion down. “Do your own dirty work.”

Mia also stood and reached for Dora’s hands. “We all want to help Paula, don’t we? And nobody has to sleep with him. He is a scumbag – he’s a maggot for upsetting you – but what better way at getting back at him than taking his keys?”

“I doubt he has a key to this basement place,” Dora said. “Not if it’s so important. He just has keys to toilets and… cupboards.”

“And offices,” Con said. “Don’t worry about that, I can find the basement key. We just need his set first.”

Mia gave her hands an encouraging squeeze and, reluctantly, Dora squeezed her back. She pulled her hands free and sat down on the bed again. “So what do I do?”

Dora kissed Chris and pushed him down onto her bed. He’d already stripped out of his shirt and had tossed it – and his keys – onto her desk. As he fumbled with his flies, she leaned down on top of him and kissed him again.

She pulled back and he squinted up at her. She hated him – his horrible greasy hair, spotty skin and shitty personality. Why hadn’t she seen it before? “You look gorgeous,” he said. “Get your kit off.”

She smiled and reached for the bottom of her top. As she pulled it up over her head she let her light shine brightly, the material shielding her own eyes enough as she pushed more and more power into the glow.

Chris shouted out and writhed beneath her, pressing his hands to his face. She grinned, straightened her clothes and clambered off him.

“No.” He reached out and grabbed her wrist. “They can’t see me in here like this! You’ve… you’ve blinded me!”

“I’m so sorry,” she said again, pulling his fingers off her. “I’ll get help, I promise. Wait there.”

His eyes were red, closed tight, and watery. Dora wasn’t entirely sure she hadn’t blinded him. As he groaned, she hurried to the door and slipped out into the corridor.

“I think I’ve really hurt him,” she hissed to Con, who was waiting for her at the other end of the corridor. “He really needs a doctor or something.”

“Then go and get a doctor,” Con said, taking the keys from her hand. “Go on. I’ll have these back to you before anybody realises they’re gone. I swear.”

Con turned away but Dora snatched at her arm, stopping her. “Chris is in my room, half-naked. How am I meant to explain that?”

“Go and put some clothes on him and tell the doc he was in there fixing a shelf,” Con said. “You’ll be fine. I’m going to find Paula.”

Dora nodded and released Con’s arm. “Good luck,” she called after her before hurrying back to her room, a grim smile on her face.