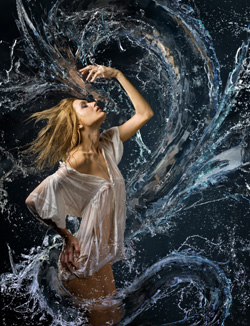 The sweaty lowland summer set in as The Day approached; Menuil could hardly waddle. Her tongue had become even more acerbic, too, something I wouldn’t have believed possible. I had worked out something to keep me occupied out of range of her venom: flying in snow.

The midwives informed me, almost maliciously, about how miserable a delivery could be in the heat, so I’d been transporting ice. I’d developed a delivery system with the innkeeper; a small boy –originally one of his sons, but more recently any child from the poorer families in the region – would dress in warm clothes and I would fly him and a shovel up to the mountain peaks, where he would prepare loads of snow, piling it onto tarpaulins and roping the corners together. Without landing, I would swoop down and snatch one of these up, fly level and high until I almost reached the inn, then dive and, still without stopping, dump my load into the yard.

There, the innkeeper and his family packed it in straw and stored it in a cellar.

When the child started shivering I’d fly him down and the innkeeper would give him a meal, while I collected the next aspirant from the ever-waiting crowd wanting to escape the summer swelter.

The innkeeper did his part in exchange for half of the ice – and I could collect a lot more than double this way, maybe five times – which at first I found a bit strange, as his wife’s figure had not changed since we arrived, so she was probably not expecting. Strange that is, until I overheard: “Five coppers for a beer? Whatja brew it from, goldnuts?”

“No, one copper a beer; one and a half straight from the cellar. But five for an ice-cold, crack yer teeth beer.”

Perhaps I hadn’t been cheating him after all.

If there had been a boy up there when the call came would I have taken the time to collect him before rushing off? But the boys tended to wear a lot of the same clothes, so my overburdened wings got a short ground rest every changeover. I was resting between shovel boys when the messenger from the birthing centre, a youngster whose bulge was barely detectable yet, panted in.

The cry sent one of the innkeeper’s brood racing out and down the road; he’d be at the birthing centre before we could get a horse saddled, and I wasn’t allowed to fly there…

“Hrasif, get your tail in here now!”

“Remember your breathing exercises, dear, slow down…” I soothed.

She had enough breath to loose a scream that probably made our messenger irrelevant.

“IT HURTS! By the nineteen demons of the outer dark, I can’t stand it. It’s tearing me apart.”

This after fifty heartbeats; and the books say it can last two days. This was not going to be the most enjoyable period of my life.

It had been going on for hours already, and seemed set in for many more. The grey-haired grannies overseeing the process were making cryptic comments like, “Five fingers of dilation, she’s doing well,” or, “Breathe, now, like we practised.”

Despite the blocks of ice in each corner, Menuil’s naked body was pouring sweat. If she’d just about stopped screaming – I knew the state my throat would have been in if I’d screamed that long, and she was a mere human – she was still croaking out, “Next time we adopt,” and “I should have laid an egg,” or, most frequently, “Why didn’t you stop me?”

That was possibly the first time someone had addressed an adult dragon as “dearey” and lived to talk about it, but it gave me something useful to occupy me. I immobilised her totally, taking care not to apply pressure to anywhere that seemed swollen.

“’Ey, that’s useful. I ’aven’t seen someone ’eld that tight outside the dungeons. Mayhap ’tis none so bad t’ave a dragon on ’and.”

“Don’t you listen to the evil witch. She wants to kill me, break me in half. Let me GO!”

Oh, Menuil, that’s not nice. You got yourself into this, and we’re all doing all we can to get you through it.

(Did you really think that, you stupid, condescending reptile? You didn’t believe you could stop me reading this, did you? M.)

“Could you push – gently – on the upper part of her belly.”

My talons, though hardly sensitive, could feel the muscles squirming like worms uncovered by turning over a stone. Down below the two wise women were rooting around in the plumbing with mutters of, “There’s the head – she’s very narrow,” and, “Push girl, push.” Menuil demonstrated she still had another scream left in her.

“When I get loose I’m going to have you sliced so fine that every child in the country can have a portion, and I’ll have it done without killing you, so you can watch yourself being eaten, you overgrown lizard. Aaaargh!”

“You just keep on pushing, m’dear. It’ll be over in no time now.” I don’t even know which of them was talking.

An explosion of blood and other unpleasant detritus resolved into a very small human being, making a surprisingly loud noise. “It’s a boy.” That was Agranessa, doing things with those marvellously dextrous human hands. “Here, let go of your wife and hold him while we get her cleaned up. Don’t let his head flop.”

So small, fitting into one paw with space to spare. The vague, unfocussed eyes scanned his new surroundings, and apparently approved, as he stopped wailing and tried to eat himself. His lack of teeth made him much less effective biting the fist he thrust into his mouth than if he’d been a baby dragon.

So small that I couldn’t look at him down my nose. So did what I did with books; lowered my muzzle and lifted him above it to study. He must have been the ugliest thing I’d ever seen: wrinkled, bulgy and blotchy, with liquid leaking out of his nose, and uncoordinated limbs waving aimlessly. Hardly a mouthful; certainly not enough to make my wife bulge like that. I was certain she was going to complain about the build quality, the finish.

I’m not sure how long I was studying this little auto-cannibal in training before I was dragged back to the world by none too gentle a prod. I handed my son over to his newly cleaned and robed mother, where he clamped himself onto one of her nipples – now I know why they start mammals without teeth.

She showed none of the aggression of earlier; I can only assume someone had drugged her. There was a dreamy expression on her face as she looked down and said, “Isn’t he beautiful?”

A dragon can’t lie, so in some sense it must have been the truth when I replied, “Yes, dear.”