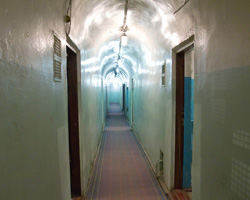 Mia listened as patiently as she could as Dora twittered on about Chris. She didn’t know what the girl saw in the guy – he had nothing on Carlos, the chef – his backside was too skinny and he had greasy white-boy hair. She nodded anyway and lifted another spoonful of soup to her lips, looking towards the kitchen and smirking at the idea of sneaking Carlos back to her room later.

When Dora’s topic of conversation changed to Paula’s whereabouts, Mia gave a loud sigh. “Girl, I told you,” she said. “She’s left. Finally. You should be happy for her!”

Mia rolled her eyes. “I know. And I know you miss her, I miss her too. But she’s in a better place now.”

Paula was, of course, in the basement. Mia suppressed a shudder at the thought and pushed her soup away unfinished. She wasn’t supposed to know about the basement, but she did. And she kept quiet about it because she did not want to end up there herself. She was perfectly happy in the House of Witches. Everybody should’ve just been happy and then there wouldn’t be any trouble.

She cleared her throat and reached across the table to squeeze Dora’s hand. “You just concentrate on that boy of yours. He’s a catch.”

Dora smiled and Mia shifted her attention to just over the girl’s shoulder. The new woman – Con – was watching her. She was always watching her and watching everyone and everything. It made her uncomfortable and she wondered if she should mention something to one of the carers.

She shook her head at herself. No. It wasn’t anything she couldn’t handle and besides, she didn’t want to be responsible if Con ended up in the basement too. She’d have another chat with her and big the place up some more.

Carlos would have to wait.

After dinner, Mia left Dora and quickly followed Con out of the canteen. She kept her distance, watching to see where the woman would go. The corridor was busy with people heading back to their rooms and she almost lost sight of her until, ahead, she spotted her rounding a corner.

Mia pushed past the twins, Ellen and Christie, ignoring their joint “Hey! Watch it!” and hurried after Con. She slowed and hung back when Con slipped into Paula’s old room.

What is she up to?

Heart thumping, Mia crept closer and peered through a crack in the door. Then, indignant on Paula’s behalf as Con pulled books off the shelf, she pushed the door wide open.

“What the hell do you think you’re doing?” she demanded.

Con startled and turned. “I was—”

“What?” Mia demanded, hands on her hips. “You were what? This is my friend’s room; you can’t just come in here and go through her things!”

Con stepped forward, a grim smile on her face. “Where is your friend, Mia? Nothing’s been touched in here for days; there’s dust on the shelves.”

Mia folded her arms, on the defensive now. “She’s left the facility. That doesn’t mean you can touch her things.”

“If she’s left, then why hasn’t she taken her things with her? You know something don’t you? Don’t you?”

“I know that you are a nosey skank,” Mia said, jabbing her finger at Con. “Just get out of here; it’s none of your business.”

Con approached quickly so Mia shoved a hand in her pocket, closing her fingers around the pebble she kept for emergencies and brought it out, smiling grimly as Con’s eyes widened, knowing she saw it as a knife.

“Not real? We’ve just come from the canteen, haven’t we? Course it’s real.” Mia waved the pebble at Con and then indicated the door with it. “You better get out of here, quick.”

As Con raised her hands and turned towards the door, Mia relaxed. She realised her mistake when Con spun back around, landing a hard smack on her shoulder. Pain jolted through her and Mia dropped the pebble with a cry.

“Bitch!” she spat. There was no way some jumped-up skank was going to get the better of her! She lashed out as she straightened up, back-handing Con across the face and as Con stumbled she jumped on her and grabbed a good handful of hair.

Con swore and twisted, trying to prise Mia’s hands off.

“Crazy… psycho!” She slammed Mia against the wall, once, twice, and Mia let go and dropped to the floor. Before she could get up, Con was on her, pressing a knee into her chest, a hand around her throat.

“Tell me where Paula is,” Con growled.

Con’s grip tightened and Mia clawed at her hand. “Tell me!”

The pressure was becoming almost unbearable. Pain bloomed outwards from where Con’s fingers pressed into her throat and her breath came in ragged gasps. Just as spots appeared in front of her vision, the grip loosened.

“And take me where, Mia?” Con asked. “Where they’ve taken Paula? Where is Paula?”

Mia tried to shake her head but couldn’t. She dug her nails into Con’s hand, drawing blood, but Con grit her teeth and squeezed harder.

Con let go and Mia sucked in a rasping breath. She coughed and, as Con got off her, rolled over onto her knees.

“You’re mental,” Mia said, holding a hand to her chest. “You could’ve killed me.”

Con sat on the bed and leaned forwards in front of her, smiling. “Yeah. Maybe next time I will. Now then, tell me about the basement.”

Mia sat on her heels and rubbed her neck. She looked towards the door, but if anybody had heard them fighting, they hadn’t bothered coming to check. “Nobody comes out of the basement,” she said. “Nobody.”