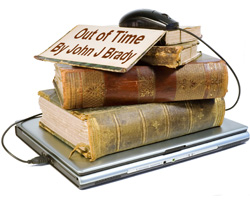 One morning I woke up and 1988 had disappeared. I didn’t notice at first, except for the fact that Katie didn’t ring me that day, and she had been born in 1988. I tried to call her later but she wasn’t there. Nobody was there.

The Seoul Olympics were meant to happen that year. At least that was what the newspapers and old TV footage from 1987 said, but nobody could remember the games ever happening. In fact, there was no record of it at all. The newspapers I found in my local library stopped at December 29th, 1987, and started again on March 12th, 1989.

The papers from 1989 told me more. That day, the twelfth of March, everybody panicked. Women who had been pregnant suddenly weren’t, but there was no child to show for it. Other people had disappeared overnight. Maybe they died in 1988, but there were no graves to mark their passing. Where had that time gone? “A tear in the fabric of space-time,” the experts said. “Time is dripping away.”

At first there had been shock and dismay, but eventually everyone got used to the idea. They gave it a name, “the Lost Time.”

I discovered all of this in the library, because I was different. To everyone else, the Lost Time was a gap in history, but not me. I remembered 1988, or at least I remembered the memory of it. I was only four years old, just starting school that year. I remember, in the years afterwards, people talking about Ben Johnson winning the 100 metres at the Olympics, only to lose his gold medal after they found out he was using steroids.

I remembered this now, but for everyone else 1988 had never happened. I wasn’t affected for some reason – I stood outside of time.

Lucky me? No, not luck. I was cursed. The rest of humanity had had years to accept this, but in my own personal universe, it was day one. I had gone to work as usual that morning just a little annoyed at Katie for not calling, and a customer mentioned the Lost Time. “What’s that?” I asked in innocence, and he told me. I had to see for myself, so I went to the library, expecting to find that some random stranger had been playing a joke on me, or he was just plain mad. But no, there it was – the Lost Time existed and now I knew why Katie hadn’t rung me.

After calling Katie’s mum’s house to ask, “Where the hell is she?” (to which I got the response ,“Who?”) I went to visit the mother of the girl I’d loved only a few days before.

She cried, a little. She was one of the “nevermoms”. She knew nothing about the child she never had, but I did. I knew what Katie looked like, the smell of her hair, her favourite food (pepperoni pizza, if you must). I knew that she would never wear blue socks on a Tuesday. She might never have existed but the hole in my life certainly did. I realised that I was her memory store. It was my duty to keep her alive, a responsibility that weighed heavily on my shoulders, until even the concept of responsibility seemed meaningless.

Life went on. I worked in the electronics shop, just like always. 1763 went, then part of 1804. I wouldn’t have noticed these disappearances either, except now I was ready for it. I memorized a list of historical events and kept a list by my bed. Every morning I checked to see what had disappeared, or even happened for the first time. France got to keep Canada, which was très bien for les Français, but didn’t affect me. They kept Louisiana too, until… 1816, according to my revised list. It seemed some things got delayed, rather than never happening at all.

The drip of time became a stream, and then a flood, until humanity’s insight was as non-existent as the elephant. The missing periods were accepted as normal. Why wouldn’t a calendar be missing three months? Just a part of life, like rain or taxes.

The changes became more noticeable. The population got thinner. People disappeared, more and more each day. One by one, everyone I knew never existed as the years slipped through whatever hole had appeared. When my parents went – and I was still there – it only brought home how special I was. In truth, I was alone a long time before that. What’s the point of making friends when the next day all that exists of them is my memory? The first time it had happened had been hard enough. I might have stood outside of time but I was still human.

Time. I’d never thought about it much. Like everyone else, I suppose, time passed and I never noticed. Never noticed until it was gone. There were the gaps I knew about and the gaps I didn’t. There must have been more of the ones I didn’t recognize, ones that happened millions of years ago. Maybe small gaps meant small changes. Maybe it didn’t. Maybe there were leaks in my future too, whatever future meant. I might have been the one who stood outside of time, but it didn’t mean I understood what was happening.

With the people went the science. My electronics shop wasn’t there one morning. Electronics itself was gone the next; the day I woke up in the open air, on a bed of grass. Man-made electricity, the combustion engine, the concept of chemistry; they all went the same way.

Everything the human race had achieved, everything we had believed, every philosophical concept we had dreamed; it all fell to me to remember. I slept with books at night, hoping that whatever magic I had would rub off on them. But the books changed and went, until I never saw paper again.

I survived. One day, I invented the club. I needed it, to protect myself from the few remaining. It gave me an advantage so that I could claim the best caves, until they copied me. No intellectual property rights anymore.

The awareness that I was the last human struck me like a stone in the head. I was cleaning a rabbit when I realised I hadn’t seen anyone in days. No devolution to a pre-Homo sapiens state, but a total absence of anything that looked human. No dinosaurs either; just the small lizards I caught for food.

So what are you, anyway? A rock? Well, of course I knew that. No, what I meant was, what type of rock? Granite, basalt? Granite, probably. It doesn’t matter anyway. There’s nobody left to classify you, or to care. I can do what I like, I can call you what I like. Ha! I’m a god, the God of Scientific Nomenclature. Not a granite rock anymore, but a kalpure. Yeah, that sounds good. You’re a kalpure. How do you like that? No? Tough!

No animals anymore. Just some plants. Don’t recognise them. Taste horrible. Feel so sick. Can’t go on much longer. Nothing left now but the end. Things going before my eyes. That grass… gone. So thirsty now. Must get water. The stream… have to get there. Good place to see the end. Come on, crawl. Just a bit more. Oh, that tastes good.

Look at the sky. It’s going faster now. Millennia, eons; flooding away in seconds. The stars, the galaxies, coming back. Back to the start. Tracing lines across the night. Coming back… to me.

I’m not hungry anymore. I’m not thirsty. I don’t feel anything, not in a physical sense, not even the ground beneath my feet. Do I have feet anymore? Is there any ground? My perception widens, taking in everything that surrounds me. I’m not seeing it, just… sensing. It’s time for it all to end, as if time means anything anymore. The stars, matter, what everything is made of; it comes to the centre, to me, and ends.

No! The hole in the fabric, that’s where time and matter is escaping. It’s here, with me. In me. I did it. I destroyed the universe! Katie, my family, humankind; it’s all my fault. I thought I had to remember them but instead I killed them.

Maybe it’s not too late. I can stop it. Stop! Go back to how it was before! Go ba—