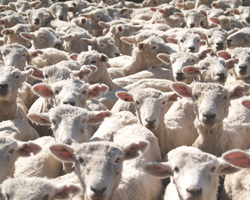 I didn’t realise that Sheeps were so large until they crowded around me and I got small and scared. We were inside a square wood home made by the Two-legged, and I went in by mistake because the chief Herder told me to, or at least I thought they told me to. It turned out that was wrong. I regret now that I didn’t understand what they meant – the Two-legged rulers, not the Herders. At the time I was new to everything, including what to do and what not to do, so what happened really was an accident, and not deliberate at all. I also didn’t know that the Two-legged command the Herders.

You know that strange effect when you see your reflection for the very first time, and you know it’s a reflection of you, and you’re really disappointed because you’ve imagined yourself like a superhero? I felt that when – inside the home – I looked at the eyes of the nearest Sheep and saw myself, and realised that the reflection was myself. There was a kind of nighty-night darkness to my body, a small head-ness, and tiny white eyes with metal inserts. I was a small, gleaming version of the Herders. Big ears though, which was odd, because Sheeps have quite small ears compared to mine. So there we were, inside the wood thing, and I was scared and I didn’t know what to do.

The Two-legged sang to me with their piercing music that leaps over the mountains and dives into the valleys. I knew a few tunes, but I was confused. Also, I knew I was little compared to them, because I’d been shown how much there was yet to learn. They were much older than me and they were in a way my teachers, although my real teachers were at the school place with the dark blue roof and the grey walls and the rooms that smell of chemical water.

When the ruling Herders sang harshly to me I was scared again. I honestly didn’t know that they were telling me not to be a Sheep. I’d thought I was a Sheep, you see; I’d thought that for as long as I could remember. The aerials of the Two-legged on the hillside vibrated with different frequencies, like that time when the big storm came and the water poured down the hill and the mud too, and the old Herder with the funny accent – the English one – got swept away. So that too is why I was confused. I honestly didn’t realise until then that they were telling me to be apart from the Sheeps, to be one of them instead. Most of my memories were of Sheeps, you see. I was Sheep-ish. A Herder laughed for some reason when I said that.

But anyway it turned out I wasn’t a Sheep. So, inside that wood home, that’s when I knew I wasn’t a Sheep for the first time. That is the honest truth. That’s when I separated myself out. You’ve got to believe this before you read the rest; it explains why I did the bad thing.

So, I understood, for the first time, that there was a connection between all the Two-Legged, that they were all part of a big thing that I was supposed to be in with. When they sang to me, they also sang to each other, telling each other of who was high and who was low – who was a leader, who was a runner, who was a strat-e-gist. (I don’t know what that means, but I know it’s got something to do with where Sheeps are in the flock.) So, although I was scared of the Sheeps hurting me, I was also excited and “pointing” (I can’t think of another word to say this) at the chief Herder.

This leads me on to the bad thing, which is what you want me to make a statement about, so here it is.

Two Herders ran down the hillside to the wood home – to fetch me, I heard it sung – and the Sheeps began to bleat and stamp and run about with staring eyes, and every time I looked into those eyes I saw myself, and also those black faces and twitching ears, and the smell of mud and droppings, and all in all it got very scary. I panicked. All I could feel was this wail rising up inside me, and I felt a desire to run around and try to find as quickly as possible a way out. I couldn’t stop, I couldn’t slow down or calm down; there was this feeling inside me that I had to move, move, keep moving, until I escaped. I know now that the Sheeps picked up on my panic, making everything worse. But I didn’t know that at the time, honestly, because I’d never seen a scaredy Sheep before. Only eating ones and sleepy ones.

Anyway, when the smaller of the two Herders stood by the side of the wood home and grabbed me – physically grabbed me! – I just kind of let loose. My mouth was all hot, and I somehow knew I could use it to get rid of the Herder, which was hurting me, and stopping me from panicking. There was a kind of squiggly Weeeeeeep! noise and the Herder stopped. Then the other one opened the door and all the Sheeps ran away. Then every Herder was by the wood home, and I was being sang at very badly.

After that, I don’t remember much. The aerials of the Two-legged were vibrating with many messages, and I know a lot of those were about me.

I am truly sorry. It was all an accident, I didn’t do it deliberately. Is it really murder? I don’t think it should be murder if it was accidental. No, it shouldn’t be murder.