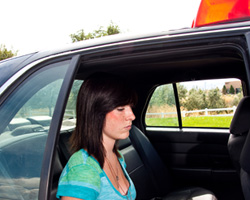 Trees groaned and creaked on either side of the road and dark clouds loomed overhead. Con hoped for a storm. If a tree blew over and blocked their path, she could escape.

She spotted Francis looking at her in the rear-view mirror and she stuck out her tongue at him.

The forest the road ran through was dark and dense – easy to get lost in if she could just get out of the car. “You’re being an arse. I don’t know why you’re doing this to me. To me. With our history?”

Francis sighed. “I have to. It’s my job. Besides, it’s your own fault – if you hadn’t killed that man—”

“That man was a scumbag.” She sat forwards in her seat and rested her cuffed wrists on Francis’s shoulder. “Pull over, Fran, yeah? Let’s have a little fun before you turn me in.”

It wasn’t far now until they’d reach The House of Witches. Everybody knew it lay just beyond the forest – out of sight and out of mind. If she could stall him, maybe make him change his mind…

The clouds burst and the rain came down hard and fast, hitting the car noisily. Francis turned the wipers on. “I know what you’re doing,” he said. “It won’t work.”

She smacked the back of his seat. “You know I could strangle you if I wanted?”

“Yeah?” Francis chuckled. “And you know I’d taser you. Get over it.”

Con sat back with a huff and turned her attention back out the window. What was she supposed to do, stuck in that place? Find a way to escape.

With all the girls in the facility, there was bound to be someone with a half-decent ability. She felt Francis’s eyes on her and caught him looking in the mirror again.

He said nothing but the car slowed and she sat up, heart beating fast. He pulled into a layby and stopped, yanking the handbrake.

He remained silent and held his head in his hands. Con waited, not daring to push him. The rain showed no sign of stopping and fat droplets bounced off the car.

“They’re expecting you,” he said at last.

Butterflies fluttered in her stomach. “So tell them I escaped.”

“I can’t.” He turned in his seat to look at her. “I have a daughter. Inside. I need you to help me get her out of there.”

Con laughed. “You expect me to help you? With everything you’ve done to me? To people like me! Your own daughter’s a witch!”

“If I put you in there, I can help you get out,” Francis said. “But I won’t help you unless you find my daughter.”

Con pushed her hair back behind her ear and shifted forwards, closer to him. “Why don’t you pull her out of there yourself?”

“They don’t let people out of there,” he said. “The rehabilitation thing? It’s bullshit.”

“I don’t know.” He sighed and scratched at his stubbled jaw. “I didn’t know that when I started my job, okay? I really believed once the girls got better—”

“Once you’d… learnt how to control your abilities, that they’d let you out. But it turns out families who are waiting for loved ones to come out, they’re just silenced, or paid off.”

“And you want to put me in there?”

Francis smiled. “I know you,” he said. “I know what you can do, how determined, how brave—”

“I know that if anybody can bring my daughter out of there, it’s you.”

Con groaned. “I’m not a hero.” She sat back and looked out of the window. The road stretched into the distance – completely and utterly empty. “You’re gonna stick me in there anyway, aren’t you? I guess I might as well have something to do while I’m there.”

She turned back to him and frowned at the grin on his face. “If you don’t help me—”

Francis turned around and put the car into gear. He pulled out of the layby, checking over his shoulder even though nobody was coming. A break appeared in the clouds and the rain eased off.

“How am I supposed to get a message to you if I need you?” she asked.

“My daughter has the ability to summon a buffalo,” Francis said. “If she summons him outside the dome, then you can take control of its mind and send it to me. You know where to find me.”

Con rolled her eyes. “She can’t summon anything less conspicuous? Like a bird?”

Francis drummed his fingers on the steering wheel, and she saw his eyes flick to her in the rear-view mirror. “I haven’t seen her for many years,” he said. “If she can do more now, I don’t know.”

“Great. You know, Fran, this is a really crappy plan.”

He sighed heavily but didn’t answer her. She could see the dome of the facility shimmering with iridescence over the top of the trees now and nerves made her stomach muscles tighten.

How does the dome work? She’d have to find out. If it was a machine then perhaps the buffalo could stomp on it and destroy it. A bloody buffalo. Of all things.

“You’ll be all right,” Francis said.

The trees thinned and she could see the sprawling compound of The House of Witches ahead. She rubbed her stomach, feeling sick. “What’s your daughter’s name?” she asked.

“Paula. After her mother.”

Con looked at him and noticed his jaw clench. He’d never spoken of another woman before. The little spark of jealously that flared up inside her made her frown. She took a deep breath and let it out slowly as Francis stopped the car outside the dome.

She nodded quickly. What choice did she have?