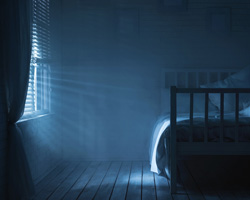 Dora didn’t like meditation. It was boring and stupid, and she wasn’t any good at it anyway. She had to sit in class with five other girls and listen to whale song and pretend she was floating in the sea, or walking through a meadow, or something equally as silly.

She opened an eye and took a peek. The other girls were still, legs crossed, palms resting on their knees. The teacher, Miss Thompson, murmured instructions to lead them through the meditation. Her eyes were also closed, and she moved her hands slowly by her sides as if conducting an imaginary orchestra. Dora had the biggest urge to take the woman’s spectacles – or the handkerchief sticking from her sleeve.

Miss Thompson opened her eyes and Dora closed hers a little too slowly.

“Concentrate, Dora,” the teacher said. “You want to be able to control your ability, do you not?”

The sooner Dora could get her power to glow under control, the sooner she could get out of the facility. She already shone less than when she’d arrived, so she was confident it wouldn’t take much longer. She didn’t want to end up like Paula – stuck there for years because she couldn’t, or wouldn’t, control her imagination.

She took a slow breath and tried to get back into the meditation. Listen to the music. You’re in the ocean. Floating. Floating.

Her mind wandered to the janitor. Chris. He’d caught her eye a couple of days ago when she’d noticed him watching her. It was flattering. He might have been a little older than her, maybe, but he was the only member of staff who wasn’t completely hideous, in her opinion. She knew Mia had the hots for one of the chefs – Carlos, with the afro – but he was far too… chubby for her tastes.

Chris had flirted with her a few times. He was awkward but sweet and she played along by giggling prettily and batting her eyes. It would be nice to have a boyfriend. At least it’d give her something to think about other than her lessons.

After meditation class was over and Miss Thompson had given them some assignments to work on in the evenings, Dora headed outside to go and sit in the sun. She had an hour before lunch and then a maths class in the afternoon with Mr Lee. That was almost as dull as the meditation.

She sat on the bench overlooking the pond and watched the orange flash of the fish beneath the water. Hearing the crunch of boots on the gravel path behind her, she knew without looking that it’d be Chris, and she smiled when he sat by her side.

“Hi,” he said. He sat with his arms over the back of the bench, trying to look cool.

“Hello,” she replied. Then she watched the fish again, deciding to make him work for the conversation.

The silence stretched for a little while before Chris shifted closer to her, leaned over and said, “Will you come to dinner with me tonight?”

She raised her eyebrows. “Where?”

“All above board,” he said, raising his hands. “Come to the canteen at midnight and I’ll have us a nice candlelit dinner prepared. I’ve got it all arranged, don’t worry.”

“Pretty please?” He gave her a daft grin and she laughed. He was kinda cute… the grin gave him dimples.

Wearing a blue dress that complemented her blonde hair, Dora closed her bedroom door and crept out into the corridor. She decided she’d have the date with Chris and then head straight back to her room before anybody noticed anything amiss. Nice and simple.

She held her shoes in her hand so the heels wouldn’t click on the floor and padded down the corridor. She passed Mia’s room, hearing her friend snoring inside, and then Paula’s place.

Paula’s door was open just a crack and Dora couldn’t resist taking a peek inside. If Paula was awake, she’d tell her about her date – maybe find out what she thought about Chris. The curtains were open and moonlight bathed the room in dull light. As Dora pushed the door a little wider, allowing the light from her body to fill the room, she saw the bed neatly made and empty.

She stood for a moment, frowning, trying to work out where Paula might have gone. She wouldn’t have left the facility. Not Paula. Maybe she was sharing a bed with someone else tonight. Was Paula even gay? Dora felt a little guilty that she didn’t know.

It was gone midnight and Chris would be waiting. She decided to look for Paula at breakfast and get the gossip then. She hurried on, and when she reached the canteen, she spotted Chris with his head sticking around the door, waiting for her. She smiled and waved, quickly putting her shoes on before he ushered her inside and shut the door.

“Anybody around?” he asked, his voice hushed.

“Good. You look stunning, by the way.”

She smiled and took a seat at the table where Chris had set up a candle and a vase containing a red carnation. He laid a napkin in her lap, performed a silly bow, and disappeared into the kitchen to get their food.

Dora waited, thoughts drifting back to Paula. Probably just with a friend. Maybe she was tied up with the twins, Ellen and Christie. Those girls did not shut up once they got going. It was weird though. Not like Paula.

She looked up and grinned when Chris returned with two plates of spaghetti bolognese. “You made that yourself?” she asked.

“Of course.” He placed a plate in front of her before taking his seat opposite. “Only the best for my angel.”

The sauce seemed a little brown and the pasta a little hard. Dora poked it with her fork before offering Chris a polite smile.

She twisted pasta around her fork and raised it to her lips. Paula’s fine, she thought. But she felt uneasy, and it wasn’t just the pasta sauce.