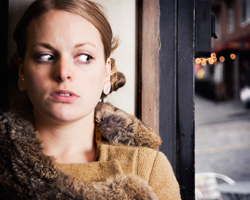 Jahera’s hands trembled as she leant against the metal wall. Her palms slipped on the sweat pouring from her skin. She struck out and sunk into her arms sobbing, the cold of the metal burrowing into her bones. Fragmented ribs stabbed at her with every breath. She dried away the last of her tears. The burnt, torn clothes scratched her face. Images of bent talons pierced her thoughts.

A self-satisfied growl drifted along the passage to her right. The urge to flee kicked in again, but she had been running for days. Prey.

The smell of rotten meat enveloped her. She turned to face hot air crawling over her skin. Through a hole in the metal wall, a forked tongue licked out to where her sweaty palms had been. Her eyes focused. The corner of her tormentor’s mouth lifted in the darkness to reveal dimly lit fangs. She knew it wanted her to run. It dared her. A white, glass eye with a sliver of black examined her from the other side of the hole. Its hate reached out; cold hands touching her organs as if preparing them for consumption.

The demon lunged forward. Its shoulders crunched against metal and its bones popped out of place. Jahera ran. She glanced over her shoulder, but she was alone. Every part of her body ached for it to be over. Blood rushed to her head. Her teeth gnashed together and her nails dug into the palms of her hands. She imagined the faces of her guild members, their screams ingrained in her mind, playing symphony to the massacre.

She looked behind again. Nothing. Her hand fumbled with the dagger at her belt.

Focus. Kill. She clung to the darkest shadows, walking on her tiptoes. Jahera smelt the creature before she saw it, as if maggots were crawling up her nose. It hugged the shadows as she did, but craned its neck and made low, jittering sounds as if calling for her death. A cold sweat pricked over her skin as she imagined more of them, images of her mutilated guild members assaulting her sense of courage.

She sprang from the darkness and into the grey, the dagger held behind ready to strike. Its glass eye widened as the blade glanced off its chest. It dived aside. Jahera used the momentum to turn and strike again. The tip nicked its tail as the beast blended into the shadows. She stopped but, before her heavy legs could even twitch, the beast extended a claw from the darkness and gripped her by the throat. Warm blood oozed onto her chest.

The creature made jittering sounds again, its throat vibrating its stench all over her. Tiny claws and curious eyes emerged from its body. Hundreds. Their black exoskeletons no different to that of their mother’s.

Jahera couldn’t scream. She tried, but couldn’t. Her windpipe was close to collapsing. She had failed. The creatures travelled from their mother’s body to hers in a sea of legs and eyes, taking little bites at her flesh as they covered her, licking up the blood that had pooled on her chest. It let go of Jahera and she collapsed.

She stabbed at them but the blows slid off their plated skin. The demons scuttled down to her legs. Their tiny mouths sunk into her flesh and they began to feed. Pain surged up through her body. She tried to kick, but the beasts pinned her down.

The mother made the jittering sound and the smaller ones retreated, croaking noises of their own. They watched, all letting out vibrating, hollow sounds to the trickle of her blood. Jahera sobbed but she had no tears left. Her arms and body shook. She got onto her feet and tried to ignore the cramp assaulting her thighs. Her shins were ready to snap and she fell to her knees.

Blood dripped onto the grey sand and she stared into the grains without hope. No longer in control of her lower half, she raised her head to look at the beast through sweat-drenched hair. Its glass eye narrowed as she threw down the dagger in front of it. Holding out both arms, Jahera closed her eyes and prayed there was an afterlife.

Instead of fear, all she felt was relief. She smiled. Freedom.