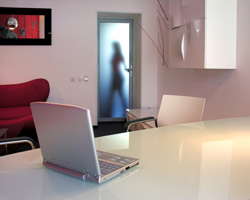 Paula lay on her back on the grass, arms spread wide as she soaked up the sun’s rays which filtered down through the shimmering roof of the dome. Buffalo snorted and chomped at the ground nearby, pulling up daisies. His hooves left prints in the earth as he moved and Paula turned her head to watch him briefly. He would never, and had never, hurt anybody. Why she had to be shut up in that place because of him…

She folded her arms across her chest and frowned up at the sky. No point thinking about it. She had to do something about it.

Somebody was moving over by the tennis court – not any of the girls – it was one of the carers. He’d taken the net down and now, picking up a hammer from his bag, started to bash at the metal post at the edge of the court. Paula winced as the sound cut through her and set her teeth on edge. She sat up and glowered at him.

Chris. She remembered his name suddenly. The new guy. He wasn’t much to look at – probably a little older than she was, with mousey hair, a slightly too-big nose and no arse. She got to her feet and walked over to him.

“Do you have to do that?” she asked, annoyed.

He stopped and straightened up. “Pole’s bent out of shape,” he said. “The net doesn’t sit right. You girls want to be able to play tennis.”

Paula didn’t particularly care about tennis. “I was trying to sunbathe in peace,” she said, hoping he’d get the hint and leave.

He shrugged, pulled back the hammer to strike again, then paused and said, “Hey, you’re a friend of Dora’s, right?”

Chris’s shoulders sagged. He opened his mouth, frowned, and closed it again. Paula waited for him to say something or go away. She glanced back at Buffalo.

“Do you know where she is?” Chris asked.

“Yeah, she’s in a lesson. Learning how not to glow.” She rolled her eyes. Lessons were a waste of everybody’s time. You couldn’t teach someone to not be themselves. “Why do you want her?”

“I’ve seen her around. Thought I might ask her out on a date.”

So he’s stupid as well as plain. “I told you, she won’t be interested,” Paula said. “Plus, where are you planning on taking her on this date? In case you haven’t noticed, we’re kinda prisoners here.”

“We’re not really meant to call it a prison—“

“You may not be,” Paula said. “I call it what I like.” She sighed and hooked her hair back behind her ears. “Look, can you just fix that thing some other time? I was hoping for some peace.”

To her relief, Chris put the hammer down. As she turned to leave, he took hold of her arm. “Hey, could you put in a good word for me with Dora? Please?”

“No—” She spotted the glint of metal at his hip and saw the ring of keys he had hooked through the loop on his belt. She pulled her arm free and checked back on Buffalo again. “Those keys,” she said carefully, “where are they for?”

“Everywhere I need to clean,” Chris said. “You’d think they’d be all high-tech here with keycodes or swipe cards or something, but apparently, what with all the different abilities knocking around, a good old-fashioned key is the safest.”

“Do you have a key to the head office?”

A suspicious frown made Chris’s heavy eyebrows bunch. “Why?”

“If I could borrow it, I can put in a good word for you with Dora.” Paula smiled and added, “If you have it, of course.”

Chris fiddled with the keys at his belt. “I don’t think I should just let you borrow it. I could get the sack.”

“Nobody will know,” Paula said. “I’m not going to do anything sinister. I just want to go and check my file – see if I can find out anything about my dad.”

Paula cared about her dad about as much as she cared about tennis. What she wanted was a clue on how to escape. She smiled again, hoping she was coming off as innocent and trust-worthy.

Chris looked back over his shoulder, towards the institution. “You can have it for the night, okay? But I need it back by morning. And you have to tell Dora I’m awesome. And sexy. And that you want me.”

Paula pulled a face. “Fine,” she said, holding out a hand.

With another check to make sure nobody was watching, Chris pressed the key into her palm. The metal was cold, but it was the excitement that made her shiver.

Paula’s heart beat painfully fast as she stopped outside head office. The corridor was dark and quiet, but somewhere she could hear shouting – it wasn’t unusual, some of the younger girls often cried out during the night – but this time it served to heighten her anxiety.

What am I doing?

She could still turn back, slip away to the safety of her room and warm bed. Her hands trembled as she put the key to the lock. She’d just have a quick look. It would be a shame not to, now that she had the opportunity. A quick look and then go.

She held her breath as she opened the door, certain that everybody would hear it creak. Then she flicked on the lights and screwed her eyes shut until she could open them again. The office wasn’t large – a few desks, some with computers, some not. Strategically placed pot plants attempted to make the room look more homely. And failed. There was a large photo of an ocean on the back wall.

God, what she would give to see the ocean.

She pulled her gaze away and rounded the nearest desk to sit in front of the computer. All she had to do was find some information on the dome. How it worked; who controlled it; if it could be broken.

She turned the computer on and a message popped up asking her to input a password. She cursed silently, looked around for inspiration, then typed: PASSWORD1.

Nothing happened. You’re screwed. She rubbed her forehead and heaved a sigh. Maybe there’d be some other clue elsewhere. Paula got up and tried another desk, pulling open drawers and lifting files out to flick through them. She was just skimming through an accounts folder when a click snapped her attention towards the door.

The handle turned. Blood pounded in her ears and her stomach churned. Quickly, she crawled under the desk.

Somebody entered the room, paused, and then came towards her. She could see their feet – sensible black shoes, a low heel – under the desk. She held her breath.

“Is someone in here?” A woman’s voice. Yvette. Paula recognised her as one of the administrators.

Give yourself up. Think of an excuse!

She waited, hoping Yvette would leave, watching her feet. Yvette moved, heading towards one of the other desks, and Paula realised she’d left the computer on.

Nerves made her want Buffalo and, as soon as she thought of him, Yvette screamed. Paula gasped and hurried out from beneath the desk. Buffalo stood in the middle of the room, snorting and stamping his hooves. Yvette screamed again and before Paula could say, It’s okay! the woman turned and ran from the room, pulling the door closed behind her.

Paula shoved a chair out of the way and went to Buffalo, burying her fingers in his thick neck fur. “We need to get out of here,” she said. She gave him a tug and hurried to the door, only to find it locked.

Key! She pulled it from her pocket with a shaking hand and shoved it into the lock. She could hear footsteps outside the office, Yvette shouting, people running. Muttering curses, she managed to unlock the door and pull it open.

A security man faced her – tall, well-built. He raised a gun. “Time for you to sleep,” he said.

“Sleep?” she repeated. Pain slammed into her shoulder, and then she fell.