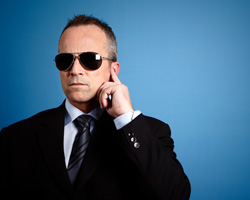 I sat across the desk from Director Haining, unbuttoning my jacket so that the Glock didn’t snag on the lining. The only source of illumination in his office was the desk lamp. Haining obviously thought the down-lighter made him look serious and brooding, whereas all it really did was highlight his double chin.

He smiled. “You’ve been head of corporate security now for, what, three years?”

“Four come June. And may I say that we, that is to say, the board, are very pleased with your work to date. Very pleased indeed.” Haining fiddled with his cufflinks. “You’re the closest thing we have to a father confessor around here. Some may be uncomfortable with what you know about us, but I’m not. You don’t judge, McMaster, you never judge.”

“All I ask for is honesty, sir. I can’t fix the problem if I don’t know what it is.”

He nodded. “Exactly, exactly. Which is why I’ve called you in this evening. We here at HanaMed Biotech are in the early stages of a highly sensitive project, one that will require our very best research and development personnel. All have been exhaustively vetted, of course, but I want you to conduct your own particular brand of security review. I’m well aware you have, ah, unconventional methods of acquiring information.”

I smiled. “You want me to dig up potential dirt on your golden boys, so that no-one can exert any leverage, down the line?”

“Quite.” He placed a data stick on the desk between us. “This contains biographical and security details of the intended personnel. It gives you somewhere to start, at least.”

“Of course, of course. You’ll have carte blanche to conduct the investigation as you see fit. I have complete faith in your abilities, McMaster, and that’s why I want you to know what’s at stake here.” Haining drew out a handkerchief and mopped his brow. “HanaMed are to produce a racially-targeted airborne virus, one which increases the incidence of male sterility. I trust you appreciate the delicacy of this matter?”

“Oh yeah, I get it. Who is it you plan on wiping out, Negros? Hispanics?”

“No, no, there’s an international dimension to all of this. It’s to be used against the Chinese.”

I betrayed no emotion. “Well, if you’re planning on genocide, think big.”

Haining went red in the face, obvious even in the lamp-light. “That’s an overly-emotive term and symptomatic of the problem we face if this becomes public knowledge. The press—”

“When did my men last conduct a security sweep of this office?” I cut in, staring at the Venetian blind behind his head.

“What?” Haining twisted in his chair to try and see what I’d noticed, then turned back to face me. “Ah, first thing this morning, as per usual.”

I stood up. “And has the room been left unattended for any length of time since then?”

“No, no. Well, I was out earlier this afternoon, but I’m sure Brenda, ah, Miss Pena, would have been in the outer office. What is it? What do you see?”

I walked round to the window blind and inserted my hand between two slats. Haining swiveled in his chair, watching me intently. I showed him a small bug with its telltale antenna. “A voice-activated, micro-burst transmitter. Not a live feed, so if we’re lucky this conversation hasn’t been forwarded yet.”

He went pale. “But I understood the windows prevented that kind of eavesdropping? Some kind of wire grid embedded in the glass?”

I stepped to the side and hoisted up the blind. “Faraday shielding. So there has to be a relay transceiver, one that spans the glass, and it has to be damn close.”

“Christ! What are we going to do? If this gets out—”

A single high-velocity round punched a neat hole in the glass, striking Haining in the forehead. He convulsed, then slid from his chair – dead before he reached the plush carpet.

I returned the bug to my pocket, took out a compact satellite phone, and dialed a number from memory. It was answered immediately but no-one spoke.

“You have obtained the information we requested?” The voice was electronically filtered and betrayed no accent.

I lifted the data stick and connected it to the USB port on my phone. “I’m sending it now.”

There was a slight pause. “Received. Everyone on this list will be neutralised within twenty-four hours. You have our thanks.” The line went dead.

I placed the data stick on the desk and returned the phone to my pocket. The building remained quiet. I lifted the desk handset and pressed double-zero.

“Craig, this is McMaster. Director Haining has just been shot from across the parking lot. Call the police, an ambulance, and instigate a full security lock-down.”

“Damn straight he’s dead, and on my watch as well. I’m going to take some serious shit over this, so get everyone off their collective ass and call in the relief shifts. I want a major visible presence when senior management checks in. Now hustle.”

He rang off. I looked at my reflection in the window. All everyone sees is Tommy Lee McMaster, a Blue Ridge shit-kicker with a football scholarship to Virginia State and twelve years in the army. Everyone apart from a voice on the phone, a voice offering a shit-load of cash and laying out what the new HanaMed project could mean for me if I ever planned on having kids.

You see it’s not ‘Lee’ as in Confederate General Lee, but a family name commemorating the Chinese wife my great-great (whatever) –grandfather Hank McMaster brought back from the Californian gold rush. Even at this remove her genetic heritage meant there was still a chance I’d end up sterile; the last of my line. That was just too big a gamble for a good ol’ boy like me.

Fù zhài zǐ huán. – As the father sows, so the son reaps.