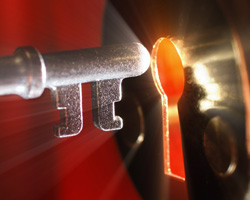 The staffroom in the Imagination Correction Facility was the colour of vomit. It reminded Chris of a recent night out where he’d drank far too much cider and brought most of it up onto the pavement outside the kebab shop. The girl he’d been with had laughed, called a taxi for herself and left him there, spewing up his guts.

He wiped his mouth, flicked sandwich crumbs from the table, and then got up to throw his rubbish in the bin. As he washed his hands in the sink, he gazed at the rota on the wall. He didn’t have a day off until Sunday. Great.

Sighing, he picked up his set of keys and headed out of the room. The janitor’s cupboard was just down the corridor and he stepped back to let two giggling girls pass – checking out the arse of the blonde – before unlocking the door and pulling out a mop and bucket.

Two weeks. That’s how long he’d been working there. Two whole weeks, yet in that time nobody had paid him much attention. The girls ignored him, mostly, and the rest of the staff only pretended to be interested in him when they had to work together. He could probably do anything he liked and get away with it.

He filled up his bucket and made his way to the canteen. It was empty now, the floor vacuumed and the tables and chairs packed away. It still smelled of burnt sausage.

Chris slopped the mop onto the floor and made a half-hearted attempt to clean it. His mind wandered. It wasn’t unlike working in a women’s prison, he supposed. The only men around were staff or visitors, and he wondered if the girls ever got lonely. They were probably all shagging each other.

He grinned to himself. There were a lot of teenagers there, full of hormones. They’d probably screw him if he paid them a bit of attention. Would he get away with that?

He shook his head. It probably wasn’t worth it. Knowing his luck, he’d chat up the one with the power to turn his cock inside out. Unless… What if he found out which girl could do what? There must be files on each inmate kept up in the main office – an office he had access to. All he had to do was a bit of research. Hell, it’d probably give him some clues as to which one was more likely to fall for his charms too.

As he scrubbed at scuff marks with the edge of the mop, the idea became more and more appealing until eventually, he’d convinced himself to sneak into the office that night.

Chris had fallen asleep without meaning to but he’d set his alarm for such an eventuality and it made him jump out of his skin at 2 a.m. He lay in bed, heart racing, trying to remind himself why he’d thought breaking into the office would be such a good idea.

It wouldn’t be breaking in, he told himself. He had a key. And it wasn’t like he was doing anything bad, was it? He wasn’t going to force himself on anyone. He’d just find out who, if anybody, would be interested in him. It was romantic. Wasn’t it?

He ignored the little voice in his head telling him it was creepy, and got out of bed. He dressed in his work uniform, collected his keys, and sneaked from the room. The corridor was quiet. There were night staff on duty and maybe a couple of the girls who couldn’t sleep would be up, but he’d be careful.

A dim light shone through the windows, enough for him to see by, and he tried to walk normally as he made his way to the main office. There was no point in looking suspicious and if anybody asked what he was doing, he’d claim he was sleepwalking.

His footsteps echoed. He had no idea why they didn’t invest in some carpet or a few nice rugs – it’d make the place look less like a hospital. He avoided the lift at the end of the corridor, knowing it was equipped with CCTV, and took the stairs up to the first floor instead.

When he heard voices coming towards him, he froze at the top of the stairs. Then, reminding himself not to look guilty, he carried on his way, keeping his head down and telling himself to breathe. He passed two members of night staff, a man and a woman, muttered a greeting, and carried on.

As he reached the office, he took a quick look over his shoulder, and then unlocked the door and slipped inside. He flicked the light switch, squinted until his eyes adjusted, then went to the nearest computer desk. He rummaged in the drawers until he came across a piece of paper with the word ‘ELEPHANT’ written on it.

Grinning, he turned the computer on. Office workers were all so stupid. All this fancy computer equipment and they couldn’t remember a simple password. He tapped ‘ELEPHANT’ into the computer and hit enter.

The desktop background showed a couple of kids, a little boy and a little girl. Chris wondered what the office worker would do if their little princess turned out to be a witch. Could they hand her over?

He clicked on a file named ‘Patient Database’ and smiled in triumph as names and photos of the girls came up on screen. Again, he told himself he wasn’t being pervy as he flicked through the photos. He discarded anybody under seventeen, almost discarded anybody over his own twenty-two years, then realised he really wasn’t that fussy.

He stopped when a picture caught his eye. The photo was a little too bright, over exposed perhaps, but the girl was stunning: blonde hair, blue eyes, perfect pink lips. Dora. Seventeen. He read her details and discovered she’d not been there long, like himself – a conversation starter? She enjoyed painting and working in the gardens. Her ability seemed fairly innocent. She produced a light from her body, like a star or an angel.

His angel. Pretty, lovely Dora. He switched the computer off and left the office, determined to win her heart.