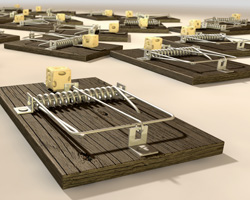 Dougout squeaked and Crystal purred as they rolled out bouncing and jerking from the ship in their buddy trawler. Dougout navigated the rough terrain while Crystal performed continuous 360-degree scans. To their increasing annoyance, the ship checked their status every fifteen minutes.

Crystal snarled, “Any way to put the ship on silent mode?”

“Sorry, dear,” said Dougout. “it would detect it and we would get penalized.”

Dougout was a small human and fitted easily into the cramped driver’s seat of the trawler. He had light brown skin, which matched his dark brown overalls and explosion of dark brown hair.

“Any sign of the life we detected from orbit?” he asked.

“Not yet. This place should be teeming with life.”

Crystal was tall and lithe in her dark brown uniform. She didn’t fit as well in her seat, which butted up against the back of Dougout’s. She had fair skin, sea green eyes, and long, golden blonde hair.

After a while, Dougout heard a soft purring behind him.

Without turning, he said, “Crystal, did you shapeshift?”

“Just trying to keep awake. Maybe we could play some nice cat and mouse games.”

“A mouse can’t reach the trawler controls. Back to work, my sweet.”

A few minutes later, she said, “I’m getting a heavy concentration of life readings beyond that hill to the right.”

They crested the hill and a colourful and geometrically complex community buzzing with activity popped into view. They perused the town with zoom pads and were surprised to discover that no two structures and no two inhabitants looked alike.

Dougout stopped their vehicle about a hundred feet outside the busy town. None of the locals showed any concern about their arrival.

They were humanlike in form, but thinner, taller, and of various colours. They wore a wide variety of brightly-coloured material strips around their bodies.

Crystal popped catlike — though now returned to human form — out of their vehicle. She switched on her translator and approached a young female.

“Excuse me, miss, but I’m taking a survey of local species. How would you describe yours?”

“Hello,” she said cheerily with a broad smile. “We are a happy people. We enjoy life. We’re shapeshifters.”

“Shapeshifters? Oh, are you familiar with Gortan’s Hypothesis that all intelligent beings eventually evolve into shapeshifters? It’s a theory well known throughout much of the galaxy.”

“No.” She continued to smile.

“Some evolve early and some later. Humans like myself evolved very late. Do you have a specific shapeshift form?”

“Things? What kind of things?”

“Things,” she said again, and pointed at a fine orange and lemon-coloured porcelain vase standing next to a flowering shrub.

“Important objects.” She continued to stare at the vase.

Crystal realized that the vase was probably someone the young female had known.

“So you change into something that is useful or important to someone else?”

“It makes us happy. We are happiest when we do something good for someone.”

Crystal nodded. “Thank you for your time.”

She watched as the young female was absorbed into the crowd of citizens and its multitude of gaudy colours.

Dougout’s voice popped into her head. “Are you thinking what I’m thinking?”

“It sounds like when they shapeshift, it’s a one-time deal. Once they become an inanimate object, they are no longer alive. They can’t change back; it’s the end of their life.”

“And yet, you see how happy they are.”

“Thank you.” She curtsied in her brown overalls. “I am Crystal, a visitor from New Earth.”

“We invite you to a Welcoming Ceremony.”

“Caution,” Dougout whispered. “Don’t tell him about me. I can monitor for trouble.”

“I gladly accept your invitation,” she said.

“Wonderful. We will send for you in two hours (or so).”  The translator made its best guess on the time period.  She would have to assume to shortest time.  She wouldn’t want to keep her hosts waiting.

Dougout prowled for dinner as a wolf while Crystal rested as a cat in their buddy trawler. Later they quietly ate together as humans.

“In a sense,” he said, “they have more control over their destiny than any other known intelligent species.”

“Every ending for them is a noble and good ending.”

“Look. Your entourage is approaching.”

A wide assortment of denizens of Noblesse escorted Crystal, surrounding her at the front, back, and both sides. They led her to a large, beautifully adorned town square lined with pillars and statues and jeweled chests. Dougout followed at a distance.

The square quickly filled with a vast crowd. At the governor’s beckoning, Crystal stepped onto a podium where he awaited her. He indicated an ornate chair for their guest of honour, surrounded by gift boxes and cut flowers.

She couldn’t help but smile at all the attention they were lavishing upon her.

She whispered into her commlink, “Take some notes, partner.”

After she sat down, the governor bellowed, “Fellow citizens of Noblesse. Please welcome Crystal, a visitor from outside, into our open arms. Let the celebration begin.”

The air was filled with song and cheer and the aroma of meats and sweets. The town square came alive with dancing and singing and cooking and hugging. Crystal joined in the singing and dancing as she moved among the crushing crowd.

In the shadows, Dougout fidgeted as he tried to keep track of Crystal. He decided he needed to get closer. He morphed into a small mouse so that he could infiltrate the crowd without attracting attention.

Crystal’s nose twitched. She looked around and eventually spotted the mouse.

Still caught up in the spirit of the celebration, she pointed excitedly and shrieked, “Mouse!”

Instantly she was surrounded by a thousand mouse traps. No two were exactly alike. The sudden absence of the locals brought an unearthly stillness to the celebration as confetti drifted slowly to the ground.

Crystal and the mouse didn’t move for a long time.