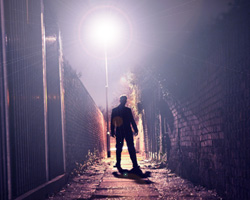 With a curse and a struggle, Con pulled up the corrugated shutter and peeked out of the storage container she’d spent the day in. She stared into the darkness down the alley, spotted a black cat pounce on something by the bins, and then disappeared back inside to fetch her rucksack. She hauled it onto her back and then crouched by the entrance, holding her hand out towards where the cat had gone.

“Come on, you little sod,” she muttered. The animal appeared from behind the bin, its amber eyes flashed and something – a rat – hung from its jaws. It took a step towards her, tail swishing, and she urged it silently closer.

When it reached her, she ran her hand along its back, making the connection she needed. She sat back on her heels and closed her eyes. Her eyelids flickered.

The cat dropped the rat and trotted down the alley towards the street. It looked one way and then the other, checking the coast was clear. Cars drove down the road, headlights dazzling, but they were unimportant. There was a group of young women across the street, dressed in short skirts and high heels, dressed up for a night out. Heading towards the cat, a man carrying a shopping bag.

Con let the cat go, satisfied. She turned and pulled down the shutter and made her way out of the alley, keeping her head down. As she passed a lamppost, a poster caught her eye and she pulled it down and carried on walking.

There was a grainy black and white photo of her taken from a CCTV camera and underneath the photo, the words: Do not approach. Call Francis Holland, Witch Hunter on…

Con screwed up the paper and dropped it into the next bin she walked by. She’d kill him. If she ever saw him again, she’d kill him.

She turned into the twenty-four-hour One Stop shop and wandered around the quiet store. A young guy wearing a baseball cap stood by the milk, talking loudly into his mobile phone. She skirted around him, snatched a small packet of cheese from the shelf and shoved it into her pocket.

She’d managed to get quite a haul before someone shouted, “Oi!”

A shop assistant stood at the end of the aisle, mop in hand. Con and the man stared at one another before she suddenly bolted for the door. She heard the mop clatter to the floor as he came after her and she ran out into the street, clutching the bottom of her jacket to stop the food from falling out.

She veered back towards the alley, hoping she could get back to the lock-up before the man caught her up. Her feet slammed the pavement and her lungs burned as her breaths came out in gasps.

She reached the shutter, dropped the food to the ground—

A hand descended on her shoulder and she turned quickly and swiped it away. The shop assistant grabbed her again, digging his fingers painfully into her arm.

“Let me go, dickhead,” she growled.

Both Con and the shop assistant looked towards the other voice. Francis Holland stood at the end of the alley, his long dark coat hiding his slender body. He reached into his inside pocket and brought out an ID badge. She couldn’t see it properly from where she stood, but she knew it said Witch Hunter.

Con rolled her eyes. She smiled as the shop assistant looked at her in horror, then she kneed him in the balls, pushed him away and made a run for it.

Dogs barked and threw themselves at a wire fence as she ran past it. She didn’t have time to stop to take control of one, otherwise she would’ve got it to bite Francis’s bloody bollocks off.

She could hear him close behind her and she didn’t dare look back. She snatched at a wheelie bin and dragged it into his path, tipping the stinking contents to the ground. God, her feet hurt. She needed new shoes – if she got out of this, she’d raid the nearest shoe shop.

Francis dived at her and she cried out as she hit the ground hard. She rolled over onto her back, kicked out at him, but he was on top of her in an instant, pressing her down with his weight and fighting with her arms.

She screamed at him in irritation as he held her wrists. “Get off,” she demanded. “Fran!”

She tried to relax though her heart was pounding. Maybe someone would see them and think he was attacking her. Where was a bloody hero when she needed one? “Please,” she tried. “Don’t do this. I’m innocent, you know I am!”

Francis gave her a grim smile. “I know you killed that man.”

“The fox killed him.”

“You had control of the fox.”

“He was a bad person,” she hissed. Phil Manning, that was his name. Fat and balding and nasty as they come. He’d sent the little girl down the road off to the House of Witches, turned her in though her parents were trying to hide her. Bastard deserved to have his throat ripped out.

She winced and Francis’s grip loosened a little. He had stubble on his chin. It suited him.

“I have to do this.” He hauled her to her feet, pulled her hands behind her back and cuffed her. “I’m sorry, Con,” he said, “but it’s over now.”

It’s never over, she thought, as he led her away.