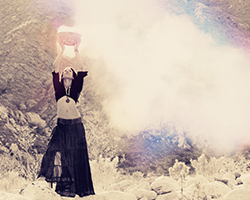 Hear my prayer, Lady, and remember me, the woman who turned away from you a second time …

Girl walks steadily across the courtyard towards the chamber. She tells herself she won’t stop, she won’t even pause for the briefest of moments, and not only because the night air against her newly shaved head is chilling her to the bone. She’s heard that everyone stops. It’s the weight of what’s about to happen; the dread, excitement, awe. But she has nothing to fear; she knows the Lady. She …

It’s not fear or dread, not even excitement. It’s the realisation that when she next looks upon the world, she’ll be changed. She’ll no longer be Girl. The other names the Lady has given her are merely clothes covering her nakedness. The name the Lady will give her now will invest her whole being, her flesh and blood and bone. And Girl will be no more.

She looks up at the stars – the last time Girl will see them. Only minutes ago she was with Lal in the stables waiting for a mare to foal, wondering aloud about the places she’d visit when she became judge-priestess, and laughing at Lal’s declaration that he’d join Sukhbir as a farmer when that happened – “You’d be a nightmare to guard! You’d never be content with only the cases brought to you. You’d be out looking for evidence, and finding hidden crimes to judge.” That seemed long in the future then, for Girl is only twenty-three and acolytes never undergo the Day of Accepting so young, and no judge-priestess has received the Lady’s brand before the age of twenty-eight.

But then she was summoned to the abbess and she could only think she was to be admonished for consorting with Lal in the middle of the night, and she was slow to understand even when Revered Mother brought out the razor and said it was time. She knew no announcement was ever made, no notice given, to reduce the strain, the anxiety, but still …

The stars are as bright and brilliant as diamonds in the winter sky, the monastery buildings sharp and knife-edged to her eyes. Even Lal seems angled, like a honed blade – he’s lurking on the other side of the courtyard, doubtless intending to be the first to call her “honoured one” when she emerges, and she wants to run to him and hold him tight and confess she isn’t ready and she’s terrified she’ll fail as a judge, and he must promise not to become a farmer but must guard her forever …

“Come, my dear,” says the abbess, gently touching her arm. “Let’s not keep the Lady waiting.”

The chamber is small, filled with sound, movement, fragrance, warmth, and Girl’s senses are reeling. Priestesses variously strike, stroke and brush an array of singing bowls while incense smoulders, herb-scented smoke thickening the air. Ewers of perfumed water stand beside linen cloths, salves are ready for her branded palm, a tea kettle warms to aid her recovery, and a flask of rice wine glows in the subdued light.

And there, neatly folded, the saffron robes of a priestess, waiting for her.

Girl’s breath catches in her throat. As she’s undressed, then ritually cleansed and purified, she can’t take her eyes from the robes and the skein of silver thread which will be used to embroider the weighing balance upon them. She’s pictured herself in such robes so very often, giving judgement, righting wrongs, Sukhbir strong and proud at her side, and now … and now …

The incense and ringing chimes fill her senses, her pulse pounds in her ears as the abbess pours wine into a porcelain bowl then opens a small ivory box. A pinch of red powder darkens the wine. The abbess holds it out. Girl knows she must take the bowl, she must drink the drugged wine, but there’s so much she doesn’t know, she hasn’t thought to ask, and her hand is suddenly trembling.

“Calm, my dear,” the abbess murmurs. “All’s well.” She takes Girl’s hand and brings it to the bowl, then helps her bring the bowl to her lips.

Girl drinks, warmth flooding her mouth, suffusing her body. The abbess kneels at her side as Girl settles herself on the sleeping mat, then she takes her hand again and places it on a wad of linen, palm uppermost.

“You’ll be with the Lady shortly,” says the abbess, stroking Girl’s cheek. “Go in joy.”

The chiming bowls seem to vibrate through Girl’s bones. Her breathing slows, her heart calms, her eyes shut. She goes to meet the Lady.

Nothing to be seen or smelled or touched or tasted or heard. Not emptiness, though. The space around her is charged with acceptance, belonging, love. Nothing lies beneath her feet, but she doesn’t fear because the Lady is there, and the Lady will never let her fall.

A thread of silvery music reaches her, light kindles. Nothingness becomes a vast hall crowded with people in distress – the poor, sick, starving, homeless, injured – some of them splashed by a river formed from tears which drop from the walls and ceiling.

She’s in the tear-river – she’s part of the tear-river – and it bears her along, creating waves that splash over more of the distressed, but then it’s not tears but coins which drop from the walls, and people bathed by the river receive food, medicine, shelter.

As she’s carried through the hall, books and scrolls, manuscripts and codices fall into the river and people read, learn, study. Books become lamps, scrolls become torches, and she’s part of a river of light which banishes darkness, and finally the balance – her balance – appears, the scales weighing right and wrong, ending disputes and bringing judgements among the river-splashed people.

Then the river fades, the hall dissolves into nothingness, and the goddess is there, clad in shifting, shimmering robes of white and saffron, silver and gold. Girl’s heart burns with love and joy.

“Here you are at last, little mouse. So many names I’ve given you. Now for your true name, the name that has been waiting for you.”

The goddess raises her right hand as if plucking something from the nothingness, and she’s clutching lightning in her hand. “The thunderbolt, power.” She raises her left hand and conjures a shining crystal. “The diamond, indestructability.” She brings her hands together. The lightning and crystal fuse in a blinding brightness, creating an orb filled with light. “Accept from me your name.”

Girl cups her hands and holds them out. The Lady spills the orb into her hands, where it melts into her skin.

“Dorje,” the woman who was once Girl repeats, and the name burns through her like a river of flame, flooding her to overflowing.

Nothingness becomes light again, becomes a great chamber. The poor and dispossessed reappear, and now the dead are also there, bodies sprawled amid looted homes, burning villages. There’s no river, though. Only a gleam of shining metal at her feet. The goddess stoops to grasp the metal, then holds it out.

“Dorje, you are mine, I am yours. As token of our pledge, accept from me the symbol of my aspect.” The symbol that will brand her palm. But it’s not a weighing balance the goddess holds. It’s a kukri.

“No …” Her cry is a thin wail of horror. Kukris mean fear and fighting, death and blood. Blood, blood everywhere. “No, Lady, I’m to have the balance. I’m to be a judge-priestess.”

“I have judges enough. But there are crimes which never come to court, which must be unearthed by someone who brings not merely judgement, but justice. Someone exceptional. Two hundred years I’ve waited for you, Dorje, my warrior-priestess. Through you, the river of justice will flow again. We shall find the demons that prey upon my people, and the demon worshippers shall fall to the kukri’s dance. Accept the symbol of my aspect.”

She argues, she pleads, she begs, she tries to make the Lady understand, but the goddess is unyielding.

“Accept the symbol. Or refuse and walk away. The choice is yours.”

She doesn’t move. Tears prick at her closed eyelids and the agony of loss courses through her body.

There’s fluttering movement around her, ringing chimes replaced with indrawn breaths, whispers, then the calm voice of the abbess clearing the room. Footsteps, the noise of the heavy door.

Gentle fingers brush her cheek. “You need to sit up, my dear. Without the pain of the brand, the drugged wine could pull you back into endless sleep.”

She struggles to raise herself even with the abbess’s help. She slumps forward, head hanging down.

“I know the Lady would never reject you. Do you wish to tell me what happened?”

She shakes her head.

Another shake. The names she had before are gone, burned away by the flame of the Lady’s gift. The name she was given, that belongs to someone who deserves such a gift.

“There are many ways to serve the Lady, and your way will become clear to you in time. Meanwhile, this is your home, this will always be your home, so remain with us while you decide what path to take.”

Again she shakes her head. She can’t stay. Not now.

“Remember, child, wherever you go, you will still be there. You cannot outrun yourself. And, most assuredly, the Lady will be there with you.”

But she knows the abbess is wrong. The Lady will never return to her now.

She leaves the monastery in the cold hour before dawn. Only the abbess and Lal are there to see her go. She hugs them both before stepping out of the gate for the final time.

The great statue of the goddess is dressed as it was when she first arrived as a child – the nightmare mask of cruel fangs and wild staring eyes, the dragon-scale armour, red-stained and terror-making, and kukris in each of its six hands. The Lady of Justice.

She wishes she could see in it the sweet Lady of the acolytes’ shrine, the Lady she has loved since the goddess first spoke to her in the rat-infested hole beneath the village temple. But all she can see are the kukris; all she knows of this aspect of the goddess is blood and death.

Heart leaden, tears freezing on her cheeks, she once again turns her back on the statue, on the Lady, and she slowly walks away.