The Man Who Was Delayed 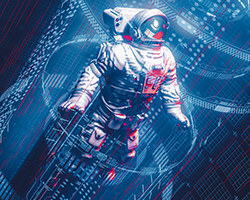 He hung in space like an antique mirror ball, frozen in a confident stance, glimmering as though dusted with a child’s glitter. A crowd gathered in front of the floating man.

The little girl with blond curls named Anna went as close as she could to the floating man and stared at him for a long time. Ropes kept people from getting too close, though no one could actually touch him. He was an afterimage, a series of insubstantial snapshots frozen in time.

“Why does everybody come to watch him? He doesn’t do anything, Mommy.”

“He’s an important person and has something important to tell us. He’s come back from a faraway place, but he’s been delayed. People come to see him because he could arrive at any moment.”

Anna turned to her mother and said, “Is he my father?”

Her mother – tall, lean, and weary in faux leather jacket and grey cotton coveralls – smiled and shook her head. She said, “No, no, of course not. That’s silly.”

But she didn’t really know for sure.

Anna and her mother were familiar faces. Alfred Northland looked forward to seeing them, though he didn’t know their names. They’d come to see him several times now – how many? Perhaps five, ten, fifty?

Of course, many visited him. He was a legend. He was the entrepreneur who went to the future after reading a message to the media that he’d bring back important news from the future. But his time machine self-destructed, leaving him delayed in re-entry, and leaving the world without his proprietary technology of time travel.

Now everyone waited for the moment when he would finally arrive with his important news. Until he arrived, he had no way of communicating his news to the world from this timeless limbo. More accurately, he was the one waiting for the world to catch up to the point where he was stuck.

He often considered the peculiarity of his state. He couldn’t move. He couldn’t speak. He couldn’t hear. He couldn’t feel. He was neither hungry nor thirsty. He never changed. He was in stasis. But oddly he could see and think. It would’ve been better had he not been aware rather than suffer this endless existence that took a toll on his mental state. He often struggled to remember his name or his message.

An embarrassment of scientists attempted to predict his eventual arrival date and time. The predictions were all over the spectrum.

And so the whole world continued to wait.

Anna and her mother were the last ones out as the Tempus Fugit Time Traveller Memorial closed for the night. They saw the night watchmen take their posts on opposite sides of the floating man. Someone always waited for Alfred Northland’s arrival.

Anna and her mother returned to their tiny houselet in Biome Village 42. Anna went to her room, her mother to the kitchenette.

Her mother stared at the only wall that wasn’t bare. A picture hung there. A picture of the man stuck in time. It looked like him anyway. Is that why she visited him so often?

The man in the picture may have been her lover, long since vanished, leaving her a single mother to her precious Anna. She couldn’t remember.

Memory was a fickle thing these days. She wondered why.

Alfred Northland remembered things in spurts. Alternating glimpses of a beautiful world and a cold, harsh world. He recalled all sorts of women, children, and old people. Family? Friends? Strangers? He wasn’t sure. Everybody looked familiar to him, yet nobody looked familiar. Had he visited them when he travelled through time?

He recalled pleasant memories of happier times between the darker times. But his memories were fragmented, and they were a strange mixture of past and future events.

He did remember the girl and her mother, even though he couldn’t remember their names. He was certain he had visited them in some other time. Is that why they came so often? They knew him?

His mind wasn’t what it used to be. He frequently forgot parts of his important message from the future. Those details that distinguished a future race of beings which had evolved from humankind. They told him important things that he needed to take back to the past, bits of wisdom and information. And some very grave warnings. Humanity had to change course or their existence was doomed.

The strange and beautiful futuristic beings told him there was no other way they could reach us since time travel did not exist in the future. It only happened that one time. Alfred’s technology had never been recreated.

He remembered their last words to him: “Tell them they must listen to you.” Their fading words were desperate.

It was all jumbled together in his head now. It wasn’t making any sense. He hoped he’d be able to make sense of it all when he finally arrived.

When he finally arrived …

Years later when Anna was nearly sixteen, she sat alone intently watching the newsfeed (since she and her mother never went to the memorial anymore). The floating man had finally become unstuck. The media bots called him a “blathering idiot”. Government drones carried him off to an unspecified location to try to make sense of the man’s babbling.

An official was quoted as saying, “Maybe something can be extracted from this pitiful man.”

She could feel the collective sigh of the world like a balloon losing all its air in a slow, steady stream.

She turned to look at her mother sitting on the floor, escaping from reality again.

Anna wished she and her mother could’ve witnessed this moment. She wished they had actually been there when he stepped back into our time. She wished they could’ve been the first to touch him, to give him a welcoming hug.

Maybe that would have made all the difference.

Maybe that would have been all he needed to become whole again.