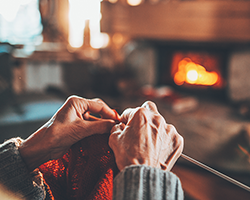 Grandmother rocked gently in front of the fire, humming under her breath as she knitted, deft fingers clicking and clacking as they did on every other night – but this time it was different. This time, her long skirt had twisted itself around her legs, bunching up to reveal her feet.

She never left her rocking chair to walk about, not that he’d ever seen. She just sat there by the range, where she could reach out and lift the blackened kettle off to make a pot of tea.

The clacking of needles stopped, Grandmother’s eyes boring into him. It wasn’t a nice stare. Not the sort of stare that said, There are biscuits in the tin on the shelf and you can have one for being my favourite grandson.

No. This stare said, You’d better run, boy, or I’ll reach out with my clawed talons and rip the liver from your body.

The kitchen door slammed shut just as Padraig reached it, hitting him on the nose. Tears swam in his eyes and the door turned into a brown blur, writhing and squirming as if it could reach out and suck him into its fabric.

“Did you think you’d escape that easily?” growled his grandmother. “Don’t think I haven’t felt the way you look at me.” Padraig must have shaken his head in denial, because she went on. “I can read your thoughts, you know. Your nasty little-boy thoughts. I know every slice of cake you’ve stolen, every bottle of milk you’ve drained.”

What? Even the ones I washed up and put back on the step? His mother had just assumed she’d miscounted and ordered more for the next week.

He blinked furiously, trying to see through the tears. “What are you?”

The clack-clack began again. But was it knitting needles or the tapping of claws across the red-tiled kitchen floor? He tried the doorknob, his palms slippery with sweat, but however hard he gripped, he couldn’t get the knob to turn.

“No escape there, boy,” his grandmother said. Then she cackled, and the fine hairs on his suntanned arms stood on end. “Besides, you’ve at least another hour left with me before your mother comes home.”

It was the hardest thing Padraig had ever done, but he turned to face her. Her fingers were a blur as she wielded the long, sharp needles. Her skirt was back where it belonged, covering the terrible scaled feet.

There was power in her words. Against his will, his feet stepped forwards. His body had no choice but to follow.

“That’s far enough,” she rasped. He stopped, swaying slightly, close enough for the heat from the range to warm his bare legs where they jutted from his school shorts. Close enough to smell the old-woman scent of her, musty and dry.

“Blood tells, eventually,” she said, as the needles clacked their hypnotic rhythm. “Do you know what you are, boy?”

Of course he did. He was a ten-year-old boy with hair that needed a trim and an itchy scab on his right leg where he’d failed at a sliding tackle last week.

“No, I’m not!” Padraig said. Adrian Matthews was mixed race, although no-one at school would dream of using that awful term, part-breed, to describe his friend.

Grandmother’s lips narrowed and the needles click-clacked faster. “There’s more than one type of part-breed, boy.”

There was? Oh! “But Mam and Dad are both Catholic, too.”

The fingers stopped moving, and the silence was worse than the constant click-clack.

“I meant that you’re a part-breed human.”

Her words hung in the air like the smell of boiled cabbage and made him feel as sick. Part-human? What’s the other part? His imagination ran riot. Was he a werewolf? Would he start growing hair and a tail at the next full moon? Maybe he was part alien? Visions of some slimy visitor from another planet oozed into his mind. No, it’d have to be scaly, not slimy. The shapeless blob in his mind’s eye swirled into a lizard-like creature with a forked tongue. Better, but not by much.

“Getting close,” his grandmother muttered. “But no cigar.”

Maybe I’m descended from elves? They’d read The Hobbit in class last year, and Padraig had drunk in every word, shivering at Bilbo’s encounters with the trolls, the spiders and Smaug, the great dragon, but he’d liked the sound of the elves.

“Ha!” The old woman’s bark of laughter made him jump. “So close, and yet so far. Our race is supposed to be intelligent.”

Padraig’s head snapped up, and for the first time he locked eyes with the old woman. “No!”

“Yes. And one day, if I let you live long enough, you too will have scales.”

“Will I have wings?” Padraig asked, carried away by the prospect of soaring over the school. “And will I breathe fire?” He could singe Miss Watson’s frizzy ginger hair—

A knock at the cottage door made Padraig jump. His grandmother’s eyes gleamed with calculation.

The newcomer was a big man dressed all in silvery metal and carrying a sword.

“I am here to slay the last dragon,” he intoned, voice muffled by the visor. “It is my destiny.”

For perhaps two rapid heartbeats, Padraig froze, then he shouted, “That’s her, in the rocking chair. Look at her scaly feet!”

But Grandmother was pointing at Padraig with one bony finger. “There he is. The last dragon. Kill him!”

The knight swung his head from side to side, baffled.

“I’m her prisoner,” Padraig cried, falling to his knees and clasping his hands in supplication. “She’s going to eat me! Please save me!”

And then, the knight struck. Blood sprayed across the room in a crimson fan, hot and sticky and metallic.

Once the knight had departed, Padraig picked dried blood from the scales on his belly with one long, tough fingernail and smiled. It had taken months of practice to discipline his thoughts, keeping his draconic Grandmother from reading his mind, but it had been worth the effort. Lucky that Stan, the postman, had been so easy to brainwash into thinking he was a knight. Mam would never notice the missing roll of tinfoil he’d used for the armour, not if he blurred her mind, too.

Finally, he was the last dragon.