On the Tuo River 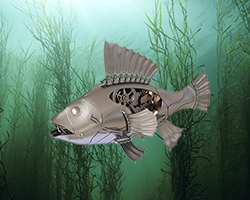 Self is on the Tuo River, among the reeds and the cold stream. A good river, from where the people and the organic animal specimens gain their daily needs. Self is its guardian. Self is the last line of defence against those who wish to harm the creatures who live on its shores and swim through its stream.

All is quiet on the Tuo River this early in the morning. The Baiji-02 dolphins forage for food among the algae. A select number of code blue humans from the village wash their clothes before they go out into their fields to care for the rice. With no need for a gun or a sword at this time, Self can rest in sleep mode. And when in sleep mode, Self researches its parent model: Organism #3455-D-x: tuojiangosaurus.

To quote author of Sauropedia-7 Michelle Xuan, PhD: “The tuojiangosaurus, a stegosaurid from the late Jurassic period was a gentle forager of low-grown vegetation. With its smaller dorsal fins (compared to its more renowned cousin, the stegosaurus), it mostly lived on riverbanks. It is believed that in the event of an encounter with predators, the tuojiangosaurus would flee into nearby bodies of water and use the currents to evade its pursuers, avoiding direct conflict at all costs. A true gentle giant.“Gentle giant,” it says. Giant? Yes. Gentle? On basic mode, yes. In mode three? No, Self is not. Self’s frame resembles the parent model, but Self is hardly similar to it. Too many adjustments to counter the more “gentle” nature of the parent model.

Regrettable. Self would like to experience the sensation of being a true tuojiangosaurus. “Gentle.” Self will try it. Sleep mode deactivated. Self transverses deeper into the waters. Among the reeds, self finds what might have been adequate for the base model’s food supply. Self mimics the motions of the jaw. Grasp. Grind. Consume. But not really. Self obviously cannot consume the vegetation, lest self inflicts serious damage upon its system. Still, with self’s mimicry comes a form of serenity. Joy perhaps, though self doubts self is capable of true joy.

“Look!” one shouts in third-generation Cantonese. He points to self. “These hicks got themselves a ’saur.”

“Probably got it for their kids. Who in their right mind buys a ‘steg’ to defend their town?” a second adds. “And look how small it is. My mom’s diabetic dog could eat that thing whole.”

“Enough with the chatter. Get the harpoons and load ’em up. They’ve got dolphins down there,” a third shouts. “Get them quick, before the yokels wake up!”

The inexperience on their part is apparent. No scars on their skin. No EMP guns. Their engine of greed has driven them far from the cities down to where the dolphins swim. Self doubts if they even know they’re on the Tuo. If they did, they would know about Self. And they would know what Self can do.

One of them looms over the side of their boat with harpoon in hand. Below, among the dark green algae, a young dolphin calf searches for food. It can not imagine that the harpoon’s point could pierce its hide . But then the poacher does not expect the impact of Self’s dorsal fin against his face. It is he who is struck first. He falls headfirst into the waters of the Tuo. The splash from his impact drives the calf away, back to where its mother swims, while the other code red humans stare with gaping mouths of confusion in self’s direction.

“What the—?” the group’s leader mutters. Before he can finish his thought, the second fin hits him in the solar plexus. He too is down for the count. The others drop their harpoons and jump for their sub-automatic machine guns. But their hands do not outdo self’s laser-guided targeting system. One dot. Six dots.Fourteen dots.  All humans dotted. All quickly struck down by the impact of self’s entire volley of drone-guided fins that are launched from Self’s back. Once every target has been neutralized, the fins return and lock back into place. Self is whole again.

The poachers resurface. Intimidation mode is the required next move. Front speakers activated. Voice tone: ORSN-WLS-5. “Intruders: you have received your only warning. This tuojiangosaurus unit will disengage non-lethal determents in thirty seconds, which is the allotted time for you to disperse. Return from where you came and do not return to the Tuo River.”

None of them argue against Self’s warning. They leap back into their boats post-haste. Mutters of “custom bot” and “modded dino” escape them, but they do not try their luck any further against Self. They speed off, hopefully to never return. Weapons remain at the ready until the boats leave Self’s range of vision. No dolphin casualties. No human casualties. Mission success. All weapons and speakers disengaged. Return to base mode.

“Good afternoon, Brother Dino,” Brother Go, the third monk of the western abbey and Self’s modifier on his morning walk on the river bank, greets self on the link. “Trouble on the river this early?” he types.

“Anything we should be worried about?”

“Negative, Brother Go. All is quiet on the Tuo River.”

“Then I will return to tend to my morning prayers. Good day to you, Brother Dino,” he says, as he walks on toward the temple up stream, where the dolphins dance and sing to the tune of his flute.

With no need for action, Self returns to sleep mode and continues to read on about the parent model and its supposed aggressive territorial habits, only able to speculate about the sensation of being a tuojiangosaurus, while Self stands guard on the Tuo.