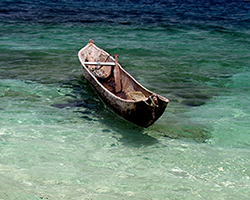 Akiowa sat with her back against a fir, looking out over the vast lake and its islands, occasionally brushing ants from her skirts, wishing she could push her thoughts away so easily. But the ants kept coming back as well, so perhaps there was no difference after all.

The spear had led her to so many villages, stirring so many painful memories of a lush valley – fruit trees, earth lodges, well-tilled fields. Memories of loving parents, a revered rock totem, an unhappy girl walking alone at dead of night. And beyond memory, the haunting vision of grief for a lost child. At each village her sorrow had grown. And guilt. So much guilt.

She’d never told the spear how she’d come to be enslaved, but perhaps it knew, and that was why it had brought her to this place, with its dark firs and thin soil and no people, where there was nothing to recall her reckless, inexcusable folly.

But no. There were people. A bull-boat came into view from behind an island, a woman paddling steadily towards the mainland away to Akiowa’s left.

The spear sent its thrill into her hand. “Must I?” she asked. The thrill came again. With a sigh she got to her feet.

She walked for some time – through the forest, around a headland – and finally came to an open space by the lake shore, undoubtedly a tribal meeting ground. A single family tipi still stood there, but the bare earth showed the marks of many others, recently gone. The bull-boat had already reached the camp, and the boatwoman and two older women were unloading baskets of spicebush, poke weed and wood nettle. Nearby, a man worked on an elm-bark canoe.

The women smiled as Akiowa approached, but the man met her with a cold, hard face and a cold, hard voice: “You’ve troubled yourself to no purpose coming so far, Storyteller. There can be no Storytelling. My brother isn’t here.”

“When will your brother return?” asked Akiowa.

While the man, Etchemin, worked on the canoe, Akiowa helped the women – his wife, and widowed mother and aunt – prepare the wild greens from the island. She crushed bark, peeled stems, shredded leaves and chattered about everything and nothing. Gradually the women responded; gradually the story emerged.

“… a festival gathering of kinship clans …”

“… Mukki’s friends … sons of the headman of another clan …”

“… pestering to go across to Great Isle …”

“… the headman agreed they could go … made Etchemin agree …”

As the tragic story unfolded, Akiowa knew how the spear could help. After comforting the women, she added, “There’ll be no Storytelling tonight, but when I speak, ask for The Titmouse and the Eagle.”

“No Storytelling,” said Akiowa, setting her bowl down, “but one or two tales, perhaps, to pay for my food?”

“I’d like The Titmouse and the Eagle,” said Etchemin’s mother.

“No!” Etchemin snapped. “I know that story, and why you ask for it. I’ll have no lies, no make-believe tales to hide reality. Tell Truth, Storyteller. Or keep silent.”

Truth. He needed a true story. And Akiowa realised, with a sudden sickening lurch, what it had to be. But she couldn’t. She …

The words came tumbling out. “A true story, then. Akiowa the Slave Girl.”

Her story. Her heart and soul spilling the words, woven with the spear’s magic, as she told of a girl whose birthright was happiness, and of her first and only argument with her parents. She told of her need to seek comfort from the village totem, her disobedience in walking alone, at the dead of night, to the white wolf rock, and of finding there a stranger, a girl her own age who was fleeing from tribeless men – Ahote, with her broken nose and troubled eyes full of suffering; Ahote who had run and run and could run no more.

She told of pushing Ahote into the small hole under the totem where babes were laid to be blessed, where Ahote would be hidden, but of being unable to hide herself before the men arrived, the men who took her and sold her into slavery.

She told of her time as a slave, of hurts and humiliations, beatings and worse, and of the final beating and the Storyteller holding her hand as she died. She didn’t – couldn’t – tell of the spear’s lightning and taking the Storyteller’s place. But she told of her last thoughts, of longing to see her family again, to feel her mother’s arms around her, to hear her father’s voice, her brother’s laughter. She told of her grief, her guilt at the sorrow she’d inflicted on them; the guilt that tore her heart, more painful than the agonies of her broken body; the guilt that consumed her even as that body died.

Silence when she finished, broken only by the sound of women weeping.

Akiowa left the tipi and walked alone to the water’s edge. Tears came. Tears for her loss, for her grieving parents. The spear tingled in her hand, offering comfort.

“If I’d not gone to the totem, not disobeyed my parents, I’d have been safe, spear. They would never have had to grieve.”

“And Ahote would be a slave,” said a voice in her mind.

Footsteps sounded; Etchemin stopped beside her.

“Akiowa should not have blamed herself,” he said, his voice soft. “Blame rests with the men who took her, with the slavers, with the headman and his wife. So you surely told her.”

“You should not blame yourself,” said Akiowa. “Blame rests with the headman who made you let your brother go, with the boys themselves, with the storm that took them. So you surely tell yourself.”

Etchemin gazed out across the lake but couldn’t speak.

“Your guilt is misplaced,” she said. “Forgive yourself.”

“Perhaps. In time. But I wish I could know Akiowa forgave herself at the end.”

She shook her head.

“Your guilt is misplaced,” said the spear in her mind. “Forgive yourself.”