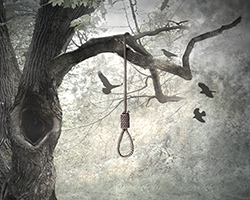 My second life began not far from where my first ended. I awoke with a noose around my neck, lying flat on the back of a cart beside dozens of corpses. They were bloated, ugly things of various shapes and sizes, not fit to be gazed upon by human eyes. As I stared at them, the stench struck me – a mixture of excrement and rotting pork, which would surely have undone bladder and stomach, were both not already empty. Somehow, I didn’t scream. Perhaps it was the shock of it all. One instant I dangled from a rope, feeling my life ebb away; the next, I was alive again. What occurred between those moments, I couldn’t say, save that remarkably, my neck had healed. I was never a religious man, but such an act defied any explanation I could think of. And the reason was an even greater mystery. Thinking on it, I found I couldn’t even recall why I’d come to wear this noose. Why would anyone execute a mere baker? And what had become of my wife and son? I had to return to them. Yet were I to flee immediately the driver would surely proclaim me a demon or a devil risen to make mischief and I would never see my family again. As my profession often reminded me, patience was everything.

Time passed. I stared at the faces around me in their various states of ruination, pondering what they’d done to deserve their fates, until the cart came to a halt and the man riding it disembarked. A door opened and the sound of laughter and raised voices reached me. Evidently, our driver had stopped for refreshment. This was the opportunity I’d waited for. When the door closed, I dared to sit up and was relieved to see no one was outside. Even more fortunately, a forest was nearby; the perfect cover for my escape. Knowing I had to be swift, as there was no telling when someone would appear, I climbed off the cart and, without glancing back, ran for the trees. I’d assumed my joints would require time to loosen, after being stationary for so long, but I immediately found myself capable of a reasonable pace. It wasn’t long before the trees swallowed me up and I was safely inside the forest.

My pace slowed slightly; it was getting dark and I was concerned about falling foul of any unseen hazards on the unfamiliar dirt path. I passed rabbits, squirrels and foxes during my flight, but all turned and fled when I neared. Even birds avoided passing directly over me. Was I to be scorned by nature herself? So be it. As I moved through the forest, I was warmed by the memory of wife and child working with me in the bakery, all smiles and laughter. They wouldn’t scorn me; they’d be delighted I’d been returned to them and would gladly flee with me.

The last of the day faded, slowing my progress, until eventually, I emerged from the forest to find myself beside a road that looked vaguely familiar. Deciding I was safe for now, I allowed myself to sit and recuperate, although I didn’t feel weary. Come to that I didn’t even feel thirsty or hungry, which was most peculiar.

I tugged on the rope around my neck, hoping to pry it loose, but it was tied tight. What manner of crime had I been accused of to meet such a sorry end? As if in response, the wind howled. There was a sudden pain in my head and as I clutched it, memories swam to the surface. I remembered a terrible fire that ravaged my livelihood and an even more terrible loss, leaving a child to care for and no wife or income. Inspired by the infamous highwayman James MacLaine, I traded my remaining savings for a pistol and the best apparel I could afford. Luckily, I already had the horse. I shook myself and tried to will my brain to stop conjuring these phantoms, to let the dead lie, but it was like trying to stop a runaway carriage.

I looked at the road and, unbidden, my mouth spoke.

“Your money or your life!”

My eyes widened and my stomach tightened.

It all came back to me. My bravado as I brought the carriage to a halt and levelled my pistol at its occupants, to hasten the delivery of their purse. My stumble. The awful crack as the weapon discharged. The child’s face as the bullet struck him and the screaming parents in the carriage. I believe I’d have screamed too, had I been capable of anything at that moment.

The howling of the wind intensified, raising my noose towards the sky.

“Am I damned then? Is this to be my fate? Can I never repent?”

I looked to the heavens, opened my mouth and an unearthly shriek burst forth from my chest.

James Creighton pulled his scarf over his face and took a deep breath. He could hear the steady clip-clop of the horses’ hooves in the distance, leading his prize towards him. A woman and child – easy pickings. He was about to reach for his pistol, when he heard something on the wind that almost sounded like footsteps. James turned to face the woods and found himself looking at a horror. The figure’s skin was as pale as the moonlight that illuminated it; its eyes were bloodshot, and a noose hung from its neck. Worst of all was the smell, which reminded him of dirt, rotting fruit and worms. He felt his stomach turn and his bladder betray him, yet his feet wouldn’t move. The figure pointed at him, then the approaching carriage and shook its head.

Somehow, the word seemed to echo around him, as if whispered by dozens of voices. When James didn’t respond, the figure began to walk towards him with slow, measured steps. Still, he remained stationary. As the horror drew near, he realised its awful visage was grinning and blood coated its lips. James screamed, but he was drowned out by the unearthly shriek from the figure, which took hold of him and dragged him into the forest.

The boy stared out the carriage window at the passing trees.

“Mama, did you hear a noise outside?”