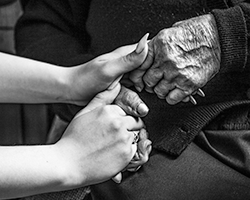 Softly, mournfully, Akiowa sang the Storyteller’s call to herself, but the rest died on her lips as she reached the brow of the ridge and gazed down over the land. A sparkling river ran alongside a birch forest, overlooked by a white rock shaped like a wolf howling at the sky. A rock she’d first seen as a babe, when her father had brought her to be blessed by the village totem. A rock which had watched, impassive, as the tribeless men carried her away.

Home. After the long years of slavery and wandering, she was home. She fell to her knees, one trembling hand at her mouth holding back her cry of joy, tears pricking her eyes.

Then joy turned to sorrow; the tears fell. For this was no longer home, since she was no longer Akiowa, young daughter of the tribe’s noblest man, his dwelling hers as long as she lived. She was the Storyteller, an old woman with no family, who would stay only a night or two before leaving.

The spear made her rise and begin the walk down towards the river. Her tears dried as she walked; her heart still wept.

As she neared the village, she gave the Storyteller’s call. Excited children ran to greet her, then youths and adults, then – her hand clenched around the spear; she could hardly breathe – then her father.

He had aged, more than the lost years should have aged him, and he now wore the headman’s wolfskin cape around his shoulders. At his side, her mother, grey hairs threaded through the black; deep lines at her shadowed eyes. Behind them, her brother, taller now, almost a man. Beside him, a young woman.

“Welcome, Storyteller!” said her father. “Too long has it been since last you graced our village.”

“My wife you will remember, but our son, Setiye, has grown much since you saw him. And this …” He indicated the young woman. “… this is our daughter, Akiowa.”

Akiowa couldn’t say what tales she told that night. She stood before her father’s home, the villagers at her feet, and told the stories the spear gave, but she heard none, felt none. She heard only This is our daughter, Akiowa; felt only the pain of confusion, betrayal and despair.

Had they forgotten her? Never looked for her? Never mourned her at all? Had they welcomed this other girl to take the place of a disobedient daughter?

After the eighth tale, she could bear the agony no longer. She drew the spear from the ground. “So ends the Storytelling,” she said, and turned away.

The young woman sat beside her father. In turning, Akiowa saw her properly for the first time. Saw the broken tip of her nose, the sadness in her eyes. The broken nose and troubled eyes of a girl pursued by tribeless men wanting to enslave her.

The spear tingled in Akiowa’s hand; the image of the totem came to her mind. Under the wolf’s howl all would be revealed.

In the dark hours as the village slept, Akiowa once again walked alone to the white wolf rock. The young woman was there, sitting at the wolf’s feet. Akiowa sat beside her, the spear between them.

“My name is Ahote here,” the woman replied, her voice flat, lifeless.

“But not in the village?”

“There I’m named to give comfort to the headman and his family. Named for the daughter who was stolen from them. Stolen in my place, to my shame and grief. They took me in, so now I take her place. Also to my grief.”

“Why grief? They cannot mistreat you?”

Silence save for the river’s music. An owl glided by on hushed wings. The pale moon rose over the forest.

“It is late to be here,” said Akiowa.

“I come here often at night. To ask the wolf to forgive me and let me go.”

“To let you return to your own village?”

“Never. Hard words and harder fists were all I had there. No, I long to wander the land, to walk among different peoples, taste different foods, hear different songs.”

“Leave, then,” said Akiowa, forcing herself to be calm.

“I cannot. They’ve bound me here with their love and their grief. Their daughter was stolen because she hid me, not herself. She’s forever lost, because for two days I feared to move. Her father searched, for months he searched, but the men who took her were far away before ever he knew of them.”

Mingled joy and sorrow filled Akiowa. They had sought her, mourned her.

“Too young to long for death,” said Akiowa. “Would you leave if no grief came of it?”

The spear sent its thrill through Akiowa in both blessing and farewell, for the old Storyteller’s gift was hers now. She took Ahote’s hand, curled her fingers around the spear. “Time for leaving,” she said, and covered Ahote’s hand with her own.

Lightning flamed from the spearhead, then came darkness. When the darkness lifted, Akiowa shivered in joy and delight, for she was looking down at wizened hands, no longer her hands, and she was sitting next to an old woman whose eyes were young and scared.

“What have you done?” cried the old woman who was once Ahote.

“Hush, do not fear,” said Akiowa, her voice bright as sunlight on water. “You will live and be happy and wander the land for as long as you wish. Longer than you might wish. The spear will guard and guide you, and give you stories. Tell one now. Tell yourself The Slave Girl Who Found Happiness.”

“You,” said the Storyteller. “Akiowa. Saving me again.” She touched Akiowa’s cheek, tears in her eyes. Then she stood, spear in hand, and walked away.

And Akiowa, once a slave girl, then the Storyteller, now again daughter and sister, belonging and beloved, went back to her village, and found happiness waiting for her there.