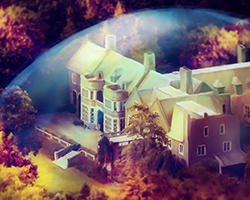 Beth grinned as her sister Katie spun around their bedroom singing along to Connie Francis. Katie loved singing – she even sounded a little like the icon and had similar looks – and what with her red-and-white halter-neck dress, she was sure to bag a Teddy boy at the dance.

Beth turned back to the mirror and blotted her red lipstick on some tissue paper. Father didn’t like her or Katie wearing lipstick but he was away with work and what he didn’t know wouldn’t hurt him.

“Aren’t you ready yet?” Katie asked, lifting the needle from the record and closing the lid. “We’re going to be late.”

“I’m ready.” She got up, took her sister’s arm, and the pair of them hurried from the room yelling good-bye to their mother as the front door closed.

It was a warm evening and children still played out in the street; two boys ran towards them, kicking a football. The girls parted to let the boys pass, then linked arms again as they made their way to the dance hall. As they drew nearer, partygoers milled outside the building and music floated from the open door– an Elvis Presley track.

They didn’t have to queue for long before they were inside, marvelling at the dresses and the boys (especially the boys), and the live band – the singer even looked a bit like Elvis.

Beth grabbed Katie’s hand and pulled her onto the dance floor. The air smelled of hairspray and Brylcreem, and it made Beth laugh. She danced with her sister, though she wasn’t as good as Katie, throwing her arms in the air and losing herself in the music.

She stopped when she bumped into someone and smiled widely when he turned to her and she realised who it was.

Bobby Mayhew. He was a year older than her and went to her school. He wore a blue suit and creepers, and had styled his hair into a quiff. He smiled back at her and said, “Wasn’t expecting to see you here. Would you dance with me?”

Beth looked at Katie, who nodded and waved her away, and took Bobby’s hands before he could change his mind. “I’m not very good though,” she said. “You’ll have to teach me.”

She whooped in delight as Bobby pulled her to him and they spun around the dance floor. She was fairly confident Bobby was just as bad a dancer as she was, but it didn’t matter. They danced and laughed and Beth decided she’d kiss him if the opportunity arose.

When the song ended, everybody clapped and the singer nodded to his band to get them to start the next tune. Beth’s gaze slid past Bobby to Katie in the corner of the room – she was pushing at the chest of an older boy.

Beth frowned. “I don’t like the look of that. Wait here.”

Bobby didn’t wait but followed her through the crowd as she squeezed by the other kids to get to her sister. Tears streaked down Katie’s red face and she gripped the guy’s hand, trying to remove it from her arm.

“Get off her!” Beth cried, shoving him away.

He rounded on her, face twisted in anger, and she took a step back. Katie clung to her arm, her fingers digging in.

“Hey!” Bobby stepped forward and slammed his palms into the guy’s shoulders, pushing him back. “What do you think you’re playing at?”

Beth turned to Katie and checked she was okay. She pulled her sister into a hug as Bobby and the other boy shouted at each other.

Katie screamed. Beth jumped at the noise, and Katie’s scream grew louder and stronger and more high-pitched until Beth had to let her go and step back, covering her ears.

Bobby was on the floor, blood red glistening at his stomach. The other guy stood over him, hands also clutched to his head though in one of them he held a knife. Beth’s eyes widened. The music stopped, people were shouting now and when the windows blew out and glass rained down onto the dancers, they screamed and ran for the exit.

“Shut up!” The man moved and his knife flashed towards Katie.

Beth reacted, putting out her hand to stop him. A strange rush of energy flowed through her and spread from her palm. The guy’s fist struck a glowing barrier, though the knife pierced it, stopping inches from Katie’s chest.

“Move. Back,” Beth growled, pushing the energy outwards, forcing him away. She pulled energy from him and instinctively moved it into the barrier. Katie had stopped screaming. The room was quiet.

Katie’s attacker stumbled and dropped to his knees but still Beth drew the energy from him. Blood pounded in her ears, and she stared at him with wide eyes, wanting to hurt him.

“Beth!” Katie tugged her arm, and drew in a ragged breath. “Please!”

She stopped, a sudden wave of confusion and nausea running over her. By her feet, Bobby groaned. “Call for an ambulance,” she told Katie. “Quickly!”

Much later, Beth sat with Katie in a cold grey room in the police station. A woman had come and looked them both over in silence before leaving. Beth wished their mother would come and take them home.

Katie leaned against her and she put her arm around her shoulders. “Bobby will be all right,” she said. “And we’ll be all right. That’s the main thing.”

Dead. Beth shuddered even though her sister hadn’t finished the sentence. She’d killed him. What had happened?

She looked up as the door opened and a man entered the room. He was middle-aged and wore a grey suit and glasses. He had a kind face.

“Now girls,” he said, “I’ve come to help. You’re both very special young ladies. Come with me now. I have a facility in the countryside which helps girls just like you. Come with me.”