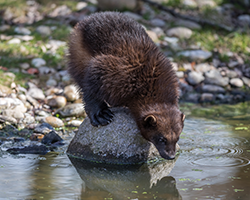 “Welcome, Storyteller,” said the woman, as laughing girls and young children danced around Akiowa. “I am Nadie. Forgive my man for not greeting you, but the menfolk are all out hunting.”

No, not all, for a boy of perhaps twelve years stood watching, a scowl on his face. His left leg was withered, wasted, and he leaned heavily on a stick.

“Siki, come meet the Storyteller,” called Nadie, but the boy turned away. “Take it not ill, Storyteller,” she continued quietly. “Sadly, my son thinks less of himself because of his leg. But come, be welcome at my home while we wait for the men.”

Baskets full of beads stood outside her lodge – stone, shell, coral, bone, turquoise – and after bringing spicebush tea and plum-bread for Akiowa, Nadie took up her work, stitching beads into strings. Another basket held finished necklaces and amulets. As Akiowa was admiring them – they were the finest she’d ever seen – the boy, Siki, appeared before her.

“My father,” he said, “is our greatest hunter.”

“And your mother is a wonderful beadworker. You can be proud of both.”

“And I’m a cripple,” he said defiantly, as if they’d argued over it. “I cannot hunt with him.”

“Perhaps, then, you can stitch beads with her.”

“Beads are woman’s work. I’m a man. I should be a hunter.” His voice cracked, and he swung his stick at the baskets, knocking them aside so beads were flung across the ground. For a moment he stared appalled at the havoc, then he hobbled away, tears in his eyes, anger and grief consuming him.

Thinking, planning, Akiowa helped gather the beads. “Nadie,” she said at length, “I have a new tale. The Wolverine Who Learned To Swim. Ask for it at the Storytelling.”

Long ago when the world was young, Wolverine lived by a wide river. His friend of friends was Otter, but Wolverine was condescending in his friendship. For was he not the strong and ferocious hunter of elk and caribou, while she was merely the eater of fish?

One day Bison came to the river. Bloodlust filled Wolverine’s heart – to kill such a beast would prove he was the greatest wolverine ever. Proud in his strength, reckless in his ferocity, Wolverine pounced. But Bison flung him aside and fought, and though Wolverine was strong, Bison was stronger. His horns pierced Wolverine’s flesh, his hooves crushed Wolverine’s bones.

Otter crept to Wolverine’s side. She cleaned his wounds, covered him with healing herbs, kept him alive.

The wounds healed, but the crushed bones set badly, so Wolverine could walk only slowly, in painful, limping fashion. He could no longer run or hunt, no longer catch the smallest animal. The hunter of elk and caribou had to eat whatever Otter brought – fish, sometimes clams and crayfish, and once – once only – turtle.

Wolverine ate the fish and clams and crayfish, but having tasted turtle he wanted more. Every day he demanded that Otter catch another.

One day Raven came to the river. After Otter had left, Raven called to Wolverine. “If you want turtle, why not catch it yourself?”

“Because, bird, I can no more run than I can fly.”

“Neither flying nor running is needed,” said Raven. “Swimming’s the thing.”

Black eyes glittering, Raven tipped his head to one side. “I’d heard you were friend to Otter.”

Raven gave a croaking laugh. “Then I’m glad I’m not your friend. Otter is killing herself to feed you, and you’ve not even noticed.”

Wolverine snarled and snapped his jaws at Raven, but the bird laughed again. “Accept it, glutton. You’re no hunter now, only an ungrateful burden to Otter.” He flew away, still laughing.

Wolverine seethed with anger, cursing his fate, but when Otter brought his dinner – a huge catfish – he looked properly at her for the first time. She was thin, haggard, her fur neglected, her eyes dull. Wolverine was ashamed.

So she did. Between them they caught many catfish, many salmon, and many, many turtles. And the wolverine who learned to swim was the greatest wolverine ever.

That night, Akiowa slept alone at the edge of the village, though Nadie and her man had wanted her to share their home. She told herself that Siki’s response to the story was too strong, his shame too raw, that it was for his sake she stayed away, that she wasn’t really trying to hide the envy she’d felt when the boy had tearfully embraced his mother. But had the spear not stopped her, she would have left quietly in the night without seeing them again.

And now the villagers had said their farewells, only Siki and his parents remained. Nadie held out a string of beads. “A charm for your spear, Storyteller. You’ve been a true friend to us.”

“I helped,” said the boy shyly. “It was my idea to put the green one there.”

“It was,” said Nadie, her voice sober, but love and laughter dancing in her eyes, acknowledging the string was flawed, but beyond happy at the boy’s contribution. She hugged Siki to her. Envy again struck Akiowa. Envy of their new happiness, their love, their settled life, their belonging. Everything she’d lost.

Abruptly she turned aside, to fasten the charm to the spear.

“Next time you come,” said Siki, “I’ll give you a string I’ll have made completely by myself.”

Next time she came. For she was fated to walk the land forever. Always the outsider. Respected, but nothing more. That was her life now; her old one was long over. She had to accept it as the boy had accepted his withered limb.

Slowly, she walked away from the village, still trying to smother the envy, to accept her lot. Still seeking happiness.