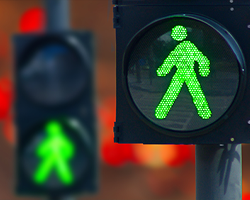 The eye never has enough of seeing.

Megan’s mind wasn’t focusing. What was wrong with her?

She was crossing a busy intersection. The WALK light flashed like a beacon of warning. She had only so much time before the light would change. Keep moving. Focus.

Work was getting to her. Too much stress. She needed a change; maybe a new job.

Stop thinking about these things. Concentrate.

Her vision was acting up again. A well-dressed woman, a young man in casual attire, and two men in suits and ties had been walking toward her. A few other people also crossed her line of vision. But now the number of people multiplied several times over until there were dozens.

The images were dizzying.

She blinked rapidly as she passed through herself. A young man passing by smiled and nodded his head. She bumped into him. He was real.

She froze. Panic welled up inside her. She closed her eyes. No, no, not here!

An assault of blaring horns jolted her.

She opened her eyes. Her vision had cleared. Alone and several feet from the curb, she hurried off the street.

Thank God she made it. This time.

She couldn’t put it off any longer. She had to see someone about the visions. Hopefully, it wasn’t anything serious – like a brain tumor.

That’s why she hadn’t gone sooner. That’s what she feared the most.

The doctor in white said, “I have good news and bad news.”

She had always hated that phrase.

“The good news is the brain scan found no tumors or cysts. Everything looks perfectly normal. The bad news is everything looks normal. We don’t know why you’ve been getting these visions.”

“I recommend you see an ophthalmologist or a neurologist for a second opinion, but I doubt they’ll find anything wrong.” He hesitated. “Or perhaps you might want to get a psychic evaluation.”

“I’m skeptical, but they’re doing psychic research at the university. You could look into that option.”

She left his office feeling uneasy; her stomach tightened and her head hurt. She leaned against his office door and closed her eyes. She took a deep breath. She had to do something.

Sitting cross-legged on a couch in the waiting room, she watched people going into the room marked “Test Site.” Young people, old people, males and females, nearly all races and ethnicities. She counted twenty-three people.

A man in white came out with a clipboard. Too many men in white. Her stomach sank. She’s had too many pointless dealings with doctors.

His face was unreadable.

She half stood up, then sat back down when he took the chair next to her.

“First of all, our tests show absolutely no sign of extrasensory perception ability. However—”

“I see,” she interrupted.

He blinked. “That’s right. You see. We believe this is something totally different. Our tests indicate you can see through the eyes of others, if that makes any sense. It can happen randomly, which would explain your disorientation at times. If this is a real phenomenon—which we can’t say for certain–you’ll need to learn how to control it.”

“I propose special sessions, one on one, with me. You don’t belong in our ESP studies group and this requires special attention.”

“Will this cost me anything? I don’t have much.”

“Since it’s still part of our research program, we’ll actually pay you for your time. Are you willing to meet with me, say, twice a week?”

Her mind was still reeling from this revelation.  Seeing the kindness in his eyes, she nodded. Maybe this was the answer all along. She just simply needed to take control of her seeing.  Her mind was jumping for joy at the possibility of a cure to her maddening visions.

Today – her fourth visit – for the first time, she was able to make it happen.

“Proceed with your description, Megan.”

She took a deep breath. “It’s simple. We’re sitting across the table from each other. I see you, and at the same time, I see me talking to you.”

“What am I looking at now?”

“You’re looking around the room, to my left, then up and to my right.”

“You could tell that from watching my eyes.”

“Leave the room. I’ll tell you what you’re looking at.”

He stepped outside, pushing the door nearly closed behind him.

“You’re looking at the door. Now at Nurse Donna passing by. Up at the ceiling. There’s a small brown stain I never noticed before. Now down at the floor. Too fast. A little dizzying.”

He returned and sat back down. He started to write in his notebook, but hesitated.

“Can you still see?” he asked.

She told him the effect had passed. She lied.

He concentrated on what he was writing in his notebook. She read his words.

He wrote, “Reminder to mention Megan to Hendrickson. Her ability might be of interest to the government.”

When he looked up, he appeared suspicious, so she shrugged. She said, “It comes and goes.”

Megan was starting to feel more comfortable with her abilities. She could learn to turn it on and off. There was an intangible joy in overcoming the fear and hopelessness she’d wallowed in for so long.

She saw no sense in continuing with the program. She’d learned enough. They had helped her, but they didn’t know it. She had begun to fail her tests intentionally. They had seen what she could do and she could sense their frustration. She claimed she couldn’t explain it. Perhaps they had cured her. At her last session, she thanked them profusely for relieving her of her terrible burden.

Out in the streets, she walked. She saw her pathway clearly while simultaneously seeing through others’ eyes.

She had complete control.

She wondered how far she could see.

From one person to another she leaped, farther and farther out.

Crossing an intersection. Into and out of a building. In a car leaving the city. Speeding down the highway.

From car to truck to airport, through security, into the airplane and up, up, into the skies, gazing at the city spread out far below her.

Breath-taking vistas awaited her. Each jump was a visual adventure, her eyes wide open to whole new worlds.