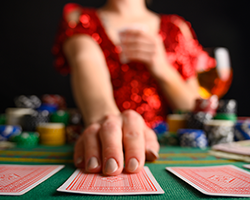 Harry Holden stumbles through Ballykey Cemetery, blood gushing from his throat, chest heaving with sobs. Faster, faster! Gotta get away! He staggers into a clearing dominated by a hawthorn tree, its every detail rendered sinister by pale moonlight. Despite everything, he shivers at the sight of it, remembering his nana’s oft-repeated warning: Never trust the wee folk, Harry.

As he falls, Harry glimpses thorny branches, blood-red berries and claw-like fissures on brown bark. He hears but doesn’t feel the crack when he lands, the cold already overtaking his body.

His eyes close and he knows they won’t open again. Not in this life, anyway. All his hopes and dreams cut short by the swish of a knife.

“Not… fair…” breathes Harry. His last words and there’s no one around to hear them.

Or so he thinks.

Harry blinks. He’s sat at a wooden table in an open field beneath a full moon. A young woman with ginger hair and emerald eyes sits opposite him, dressed in a red velvet suit that glimmers in the moonlight.

“Hello, Harry.” Her voice is soft, her smile radiant.

“Where am I?” Harry rubs his throat. “I had the strangest dream. I —” His evening flashes by in a series of snapshots. Promising Sophie he’d get the milk on his way back. Kneeling at his nana’s graveside. A blade against his throat.

He gasps as if struck, mouth moving uselessly.

“Yes, a nasty business altogether. He’ll be caught soon enough, although that’s scant comfort for you.”

“The knife was so cold.” He slumps back in his chair, eyes watering, stomach tight. “It’s not fair. We’d finally turned the business around. No one thought it’d ever work, that we were mad to pack our jobs in, but me and Sophie believed, and…I was going to propose at Christmas. I had a ring picked out and everything.” His voice breaks. “And now I’m dead.”

“Well, you did have the good fortune to lumber into my clearing. It’s been rather a long time since any big folk died here.”

Harry wipes his face with the back of his hand. “What?”

“You’re dead, not dense, dear.” She clicks her fingers and a bowl of red berries appears on the table. “The tree’s offering is rather beautiful at this time of year.” Harry shivers, recalling the title of one of his nana’s tales: the fruit of the fairy thorn. The woman’s smile widens. “There we are.”

She dips her head. “Ciara.”

“Wind your neck in. Where do you think the stories come from?” She leans forward. “I heard your dying lament and snared your soul before it could drift away to goodness knows where.”

“For a game, of course.” Ciara removes a deck of cards from her pocket and sets it on the table. “There’s always a game, Harry.”

“You want to play cards…for my soul?”

“A simple game of chance: top card wins. Royalty are worth ten, aces are one.”

“That’s it? Not blackjack or something a little more sophisticated?”

“Blackjack?” Ciara snorts. “Catch yourself on. Fairies don’t play blackjack. Or poker, for that matter.”

“Simplicity is a virtue. Best me, and you’ll live again, fully healed. Lose and, well, you’ll be spending an awful long time in my company.”

“Fully healed.” Harry touches his throat. “Where’s my body? Beneath your tree?”

“Oh, time is different here. Slower than you’re used to.” Ciara cracks her knuckles. “Shall we play?”

“No matter the century, you big folk are a suspicious lot, aren’t you?” She clicks her fingers again. A yellowed parchment materialises on the table. “A special contract forbidding either of us from cheating, on penalty of forfeit.”

Harry touches it and instantly knows its contents, including the key lines: Harry Holden’s soul returns from whence it came, if he triumphs in the game. Should he fail, with Ciara shall his soul reside, in everlasting servitude to bide.

“If you’re satisfied, copy me.” Ciara clears her throat theatrically. “I consent to these terms.”

After a moment’s hesitation, Harry follows suit, and the contract disappears.

“Splendid. Now, would you care to shuffle, dear?”

Harry shuffles the deck. “So, best of three? Five?”

Harry swallows. He pictures Sophie, his parents, and everyone he’ll never see again. The empty seat at the weekly film nights. The kids he’ll never have. A life not even half-lived.

“One game.” He forces himself to smile. “Bring it on.”

Without hesitation, Ciara flips the top card of the deck: a nine. She sits back and gestures at the deck. “Your turn, dear.”

Harry reaches forward and pauses, hand hovering over the deck. Ciara drums her fingers on the table, eyes fixed on his, unblinking, unwavering. In that instant, he sees her as she truly is: an ancient, malevolent being that only fools would make deals with.

He grips his card, mouths a silent prayer, and turns it over.

The queen of spades stares back at him.

Ciara holds her hand up, fingers poised to click. “Time to reunite body and soul, as per our contract.” Her grin widens. “Perhaps I’ll pop by and visit Sophie, to ease her loneliness.”

Harry blinks. He’s flat on his back, surrounded by darkness. I died at night. So that’s when I’ve come back. It makes sense. Except there are no stars. No moon either. Just complete, smothering darkness.

The word echoes around him.

Ciara said my body was moved. So where am I?

Harry tries to stand and his head bumps against something solid. He gasps in surprise and the air tastes musty, dirty…

I can’t breathe. I have to get out!

He slams a fist upwards and winces.

Wood. How can it be wood?

“Hello? Can anyone hear me?”

The wording from the contract enters his mind: ‘Harry Holden’s soul returns from whence it came’. Nothing about where his body would be. Heart racing so fast he fears it might burst, Harry feels around him.

Wood. His world is a wooden box.

This time there really is no one around to hear him.