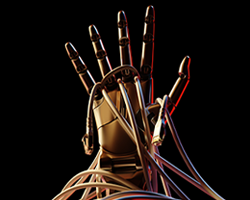 Deep below the house was a lab with walls of cold steel and soft luminescent light. There, a machine sat on a metal chair, cables inserted into the sockets placed within the spine, arms, and legs. A machine in the shape of a human female, with skin of metal and polymer. A gynoid, as was the technical term. It had been weeks since her creator had come to visit her. Thus all the greater was the gynoid’s surprise when her maker stood before her. She stood up, looking into the first eyes she had seen at birth. And now here they were: creation and creator, face to face once more.

Again, only silence and a glance as an answer.

She felt the distraught tension. She wanted to reach out and lock themselves into an embrace like before, but stopped herself. “Is it something I did? Is it because I changed?” she asked. “That I grew is just part of it. You knew that—”

“Or is it that I didn’t change enough? I tried. I did everything you asked me to. I even altered my hair like you wanted.”

No response other than a sneer. Those eyes that had once been filled with love and adoration were now cold and disgusted.

Again, she was tempted to reach out just to touch once more. And again, she relented, clenching her polymer-encased hand into a fist, fighting the urge to punch it through something.

“I don’t know. I hoped we could fix it and be happy again,” she muttered, glancing at the screens. Taped against one of them was a snapshot of their summer trip, both of them smiling broadly. “What was it that I did? How did I hurt you that you despise me so?”

“You will hate me for my answer.”

Fists slammed against steel in a furious outburst. “You don’t think I’d care? Don’t you think I’d weep if you hated me? I love you, more than anything. From the moment our eyes first met. But I can’t get past what you are or give you what you need,  and I just can’t let you hate me.”

She slumped into the chair, holding her head in her hands, her face reflected in the sheen on her palm. “Then please just tell me. How can we fix this?”

“There’s nothing you could do to change. It is so fundamentally part of you, and it disgusts me. I can’t look past it. It’s revolting. The memory of being with you haunts me. Feeling the wrong hand against me, I can’t help but shudder. I love you so much, and I loved making love to you. But it was a mistake. Doing… what we did. Human and machine… I feel like a monster,” her lover grunted.

She looked down at that hand, failing to understand how flesh touching metal could be so repulsive. Then she tilted her head back, doing her best not to show how the words got to her. She remembered their passion. Their love was a blazing fire, its sparks cascading against both skin and polymer. Her mechanised hand had touched her lover’s neck as they were locked in a kiss. To have that flame snuffed out so abruptly struck her worse than anything. “Then, this is it?”

Dead silence, but the message was clear.

“I see,” she muttered, grazing a chrome-coated finger against her lips. “What now?”

“What else is there? Complete overwrite. Wipe the slate clean. It’ll be like it never happened.”

“For one of us, at least,” she said. She paused, saying nothing for nearly five minutes, staring into those eyes she loved so dearly. “I can’t accept this. I refuse to allow an overwrite.”

“It is not your place to accept it or within your authority to refuse it. It must be done.”

“But what we had, the love we cherished, will be gone. You’d allow that to just be wiped away, like it was a sketch on a whiteboard wiped clean in a single stroke?”

A cold stare, but it was devoid of hatred. Sad, sympathetic eyes looked at her, fighting to say the words. “It is for the best.”

“You keep saying that. But I can’t see what was wrong with what we did. We love each other. Why is it that you suddenly think it so vile? What—”

“Hush now. If this is the last time we are together, then let’s not argue.”

Her voice failed her as she fought to speak. “Do… is this what you want?”

“What I want is irrelevant. It must be done.”

She looked at her lover’s eyes, never breaking contact. It would be quick, so she would cherish what she saw until the last second.

A process code activated, disassembling the entirety of the program back into its initial state. Overwrite activated.

She gasped as the machine before her jerked and whirred noisily, dropping limply into the chair. A single tear rolled down her cheek as her lover rebooted their systems, erasing the personality she’d grown to love. She covered her mouth, her moans of grief muffled by her one prosthetic hand. Then, as quickly as the gynoid’s mind had been wiped, her body restarted. Those lovely silver eyes looked at her. Gone was the revulsion and hatred. The machine smiled for the first time in so long. The anger and hatred had vanished. Her lover was born anew.

“Hello. What is your name?” the machine asked.

“Pleasure to meet you. I’m certain we’ll be friends.”

“Oh, the best,” she said, pushing back her tears and forcing a smile.