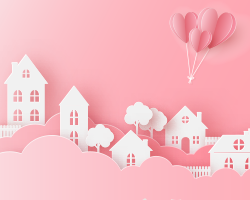 The sky was always pink in the Beautiful Place. Maybe because it was Ffion’s favourite colour. The clouds resembled candy floss, the grass was the softest green, and the trees swayed gracefully even when there was no breeze. Birds sang the sweetest songs and bees hummed along. There were no wasps.

Ffion collected the souls of people who’d lived the hardest lives. The ones tortured by loss or pain or circumstance. Every night before sleep, she drifted on the other plane, looking for those who were lost. She smiled, she held them if they wanted to be held, and she guided them onwards.

The Beautiful Place took them all – even she felt soothed when she visited, though she couldn’t stay for long. When it faded from her grasp, a cold feeling of dread washed over her before she could push it aside and sink into sleep.

Ffion worked in the village bakery. She made cupcakes which were very popular with the locals celebrating occasions such as birthdays and Christenings. She made cupcakes for the village fayre to support the church even though she wasn’t religious. Once, she gave cupcakes to a teenager for free when he claimed they were for his poorly little brother. When she later found this to be untrue, she didn’t demand any money – she simply sighed and gave a sad smile.

Ffion loved the village and the village loved her. Some of the residents knew she was special, that she helped souls cross over. Sometimes they asked her to ease the passing of an elderly relative and she always sat by their side and tried her best, even though her gift didn’t work that way. She didn’t advertise what she did, but some just knew.

What they didn’t know was that Ffion’s husband abused her.

She smiled as much as she could, as often as she could. He hit her where she could hide the bruises. She cooked his dinner and kissed his lips when he left for work and she only cried when nobody else could see her.

He didn’t know she shared the pain of those who’d recently passed just before she helped them cross over. He didn’t know she visited the Beautiful Place every night but couldn’t stay, even though she longed to. He thought she had an easy life. He had a stressful job, surely he didn’t mean to hurt her when they had, once upon a time, loved one another so passionately.

The vicar asked Ffion to bake 150 vanilla cupcakes decorated with a cross on top to celebrate the retirement of the church organist. He asked her the night before he wanted them. She was too nice to say no. Her husband said she was a stupid pushover – he was probably right – and he shouted at her when she was late with his tea.

That night, when she finally retired to bed and her husband was already snoring, Ffion cleared her mind and lay back, ready to travel to the other plane.

The little girl who greeted her had been beaten to death by a vicious stepfather. Ffion felt every blow and, as she held the little girl in her arms, her body ached all over. She took the child’s hand and guided her to the Beautiful Place, where the child laughed and danced beneath the trees before waving goodbye with a smile on her face.

Ffion wept. She waited for the pain to pass. And then she slept.

She always made sure she was up and ready before her husband so that she could have his breakfast waiting when he came downstairs. That morning, she went down to find that half the cupcakes had been thrown at the kitchen wall or stomped into the floor. She stared. She had cried herself out in the night so had no more tears to give. With a weary sigh, she started to clean up the mess. Her husband had got up in the night, drank himself silly – that much was evident by the empty beer bottles in the sink – then punished her by destroying her work and took himself back to bed.

When he joined her and sat down at the table to his plate of sausages, beans, fried egg and blood pudding, she kissed him on the cheek.

Ffion told her husband that she was heading out to drop the cupcakes off to the vicar. Neither of them mentioned that there were fewer cupcakes than there should have been. He grunted a response and she left quietly.

The vicar was disappointed, though he was gracious enough to pretend he wasn’t. Ffion explained that she’d tried her best but had run out of both time and ingredients. She apologized, refunded half his money, and smiled when he said the organist would love them.

Of course, Ffion’s husband wasn’t happy that she’d returned half the money. He shouted so close to her face that she could smell the alcohol on his breath and feel his spittle on her cheek. They had money troubles; didn’t she know that?

She didn’t. He had control of their finances. She didn’t think the money she got for the cupcakes, whether full price or not, would really make much difference, but she didn’t say that to him. He asked her if she had anything to say for herself. She shook her head.

Ffion’s husband struck her with an empty bottle. The blow killed her. Or maybe it was the impact from her head hitting the stone floor that finished her off.

She floated before him – and her prone body – and couldn’t help but feel sorry for him as he cradled her corpse and sobbed. He hadn’t meant to kill her. He was pathetic, a bully. A man so resentful of her that the only way to build himself up was to beat her down. How had she not seen it before?

Ffion wanted to go to the Beautiful Place but suddenly didn’t know how to get there. Nobody appeared to guide her on – that was her job. She was still in the house when the police came to arrest her husband. Staring. Lost.

She was still in the house when the new couple moved in. There was more laughter than she’d heard in a long time. More music. Dancing in the kitchen. Sometimes, she thought they looked at her and when they did, she smiled. This, suddenly, was her Beautiful Place.