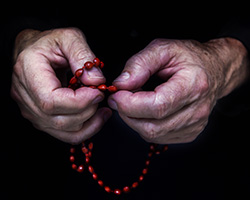 Captain Dunstan heard the footsteps approaching his cell. He eased himself off his prison cot and rubbed his forehead. A prison guard stopped outside and opened the cell door. A priest entered, followed by a tall man in black robes who carried a thick scroll in his hands. Captain Dunstan almost laughed, but decided he hadn’t the energy to do so. “My sins?” he asked, nodding towards the scroll. “You sure it’s thick enough?”

The tall man didn’t answer. The priest held out his hand towards the captain. A bracelet of prayer beads dangled from the priest’s fingers. Dunstan shook his head.

The priest spoke softly. “Take them my son. They shall be a comfort to you.”

Dunstan glanced at the priest’s face, then down at the beads. There was little point in offending a man of the cloth. He gave a shrug and took the beads. “Thank you,” he murmured.

The priest nodded, made a Sign of the Hand. “Use each bead, for each question,” he said. He gave a curt bow and exited the cell. Dunstan watched him leave. What questions? And where were his last rites? Was he to die without a blessing?

“Are you ready, prisoner?” The tall man asked, unfurling the scroll.

Dunstan sighed. “As ready as I’ll ever be, ghoul. Tell me. Tell me of my heinous sins against this world.”

“Name?” the man asked again, but now Dunstan felt his throat tighten. He was about to curse again, but his throat closed tighter, then tighter. He felt his hands begin to burn. He looked down to see the set of beads in his hands glow red. He could not breathe. In a few moments, he knew he would die.

The priest’s words came to him: ‘Use each bead, for each question.’ He clasped his fingers around the first bead. The invisible fist around his throat eased its grip a little.

A flood of images came to his mind: a young boy dangling a dazed frog by the legs over a nest of frenzied ants, a gangly youth gently holding a giggling girl’s hand sitting under an arching oak tree, a young soldier making his first kill, his knife plunging again and again…

The pain from the bead intensified. A name was needed. A name pumped into his brain. He pushed the name away. That was not his name. His throat tightened and tightened—

“Monster,” he gasped. “My name is Monster.” The pain stopped.

The tall man rolled the scroll back up. The beads in Captain Dunstan’s hands grew colder, the red faded to black.

“I shall return on the morrow,” the tall man said as he left the cell.

Dunstan looked at the beads. He weighted them in his hand. He lifted them up to the light. They were as dead and dull as stone. He placed the bead bracelet on his cot and walked over to the small shaving mirror near his cell window, rubbing his throat as he moved. He peered at his reflection. There was no mark anywhere on his neck. But the pain he had felt was real. Very real.

He was about to move away, but his reflection held him back. He looked fresh, fresher than he would have expected. His chin had little or no stubble. His eyes showed no crust from sleep.

He had been captured moments after the battle had begun. Had they shaved him? Cleaned his face? They hadn’t the decency to give him his last rites before execution but they were happy to wash and shave him?

He reached up and clasped his hands around the cell windows, hauling himself up to see outside. Nothing but fog and mist.

He rubbed his throat again. Tomorrow the tall man would return. He went back to his cot and sat down. He ran his fingers through the beads, counting them as he did so. But the number did not end. . He looked down at the beads, holding one in his thumb as a starting point, eyeing each bead as he counted. Still he could reach no end number. A bead would pass his thumb, he would count it, then another, then another. He reached a hundred, then two hundred, then three hundred. Yet the bead bracelet did not grow in size or weight. It was then he noticed the rust red stain on his vest.

He lifted the vest up. On his chest below his left breast was a wide circular wound. He rose from seating and again stood before the shaving mirror. The wound was a dull dark red. It covered the place where his flesh once covered his heart. He remained standing at the mirror for a long time.

No one could have survived this wound.

Eventually he lowered his vest back over his chest. He opened his palm and allowed the bracelet to spill over his hand. It hung there lazily like a black spider sleeping off a heavy meal. He folded his hand over the beads and returned to his cot.

Then he hung his head and wept uncontrollably, like so, so many had before him.