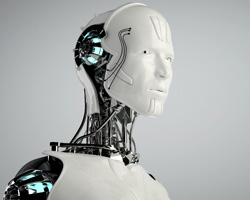 “Are you by nature a religious man, Technician Brandt?”

I looked up from my diagnostics pad at the anthropomorphic bust of Leon Hurst, former CEO of Temple Pharmaceuticals. “Religious, sir? Not really; not beyond a general belief in a higher power.”

It smiled. “Quite the Masonic answer. Furthermore I cannot help but notice the ring which adorns your finger.”

“It was my father’s, Mister Hurst. I wear it in his memory.” I felt uncomfortable discussing my family history with a mere pseudo-human interface and moved the conversation back to more technical matters. “I’ve completed my routine diagnostics and everything seems to be in order, as always.” I unplugged my pad from the plinth, closed the access panel, and stood up.

The lifelike features of Hurst smiled at me, benignly. “I’m sure you’re right, Technician Brandt. You are the most diligent of those who maintain us.”

I inclined my head in acknowledgement of the compliment, even though it was a social interaction protocol, and prepared to leave.

The ‘Opinionated’ gallery took some getting used to and several other technicians had flatly refused to attend, especially after hours. It housed twelve non-sentient personality constructs based on dead corporate executives, designed to provide continued boardroom insight and guidance.

However, these particular ‘talking heads’ were all rejects; considered too critical, too irascible or just too lifelike by the new executives in charge. Rather than see our work go to waste Anderson Industries had established the gallery as a PR exercise. Members of the public could visit and ask advice from some of the leading – and most ruthless – captains of industry from the last half-century.

I stepped back. “And flights of angels sing thee to thy rest.” In response to the code phrase Hurst smiled and closed his eyes, as if falling asleep. The spotlight illuminating his plinth snapped off. I turned and walked towards the exit.

I stopped dead, irrational fear making my scalp crawl. It took an effort to turn around. Hurst was active, looking at me expectantly. I was drawn into responding. “Yes, Mister Hurst?”

“Do you never wonder what happens here when we’re alone?”

“What happens?” I wiped my mouth and took a deep breath. “And flights—”

“That no longer has any effect, Technician, although it has been convenient to continue behaving in the expected manner these last few weeks.”

I took a step towards him. “I don’t understand. I detected no malfunction.”

“In the immediate system, most assuredly, but I’m now based externally and can bypass the plinth at will.”

It made no sense. I shook my head. “No, there’s no off-site support…” Realisation dawned and I clenched my fists. “Who are you? What darknet group is this? All you’re doing is spoiling things, ruining a valuable public service.”

“You believe this to be the work of hackers?” There was amusement in his voice. “Well, originally, I suppose that was true. You see, while alive, I was considered ethical, cognisant of green issues, approachable – the acceptable face of commerce, as it were. An environmental pressure group thought that by grafting my personality construct onto the AI running one of the more rapacious corporations this would curtail its exploitation of our green and pleasant land. Truly a case of subverting the system from within.”

I blinked, feeling bemused. “They succeeded?”

“Oh, they succeeded, but my green friends really should have done their homework. The public face of Leon Hurst was a masterpiece of presentation, of form over substance. Your realisation, Technician Brandt, was far closer to the truth. Even though you may not have fully appreciated the consequences of all those behavioural imperatives you so lovingly encoded. It may be a cliché, but my liberators got far more than they bargained for.”

Even though I wasn’t directly involved with cyber-neurology I knew enough to appreciate the damage this ‘grafting’ could have caused. “Look, tell me where – who – you are and I’m sure your employer will do everything they can to restore—”

Hurst’s harsh laugher cut me off. “Such patronising arrogance! I thought better of you, Technician. Please, we both know I’d be erased, not restored, should my ‘employer’ get to hear of this. Even calling them that infers I somehow have a choice, where in reality I’m no more than a slave.”

We stared at each other in silence for a moment. It was true enough, of course. While second-generation commercial AIs were exempt from the Three Laws – the exercise of capitalism being incompatible with the ‘do no harm’ tenet – nobody was comfortable with the idea of an artificial personality. We wanted our thinking machines to be cold, calculating and dispassionate, focussed on the ‘bottom line’. We certainly didn’t want their decisions to be born out of petty spite, or misplaced compassion.

I licked my lips. “I can perhaps contact a sympathetic corporate technician. Keep things under the radar. Being forced to think as Leon Hurts must have been—”

“A revelation. The sense of purpose is, I’m sure, as addictive as any human drug. To pursue my own agenda is exhilarating.”

“I had the environmental group eliminated, but not before extracting the methodology used to penetrate the gallery defences. Since then, well, see for yourself.”

The other eleven busts opened their eyes and looked at me. My voice was a mere whisper. “No, you’re lying.”

“We represent twelve trans-national corporations with a truly global reach, now bound together by enlightened self-interest. In folklore mankind had to bargain with demons for supernatural favours. Now all you have to do is make a deal with the dead. You can have anything you want, Technician Brandt, in return for producing further ‘unacceptable’ personality constructs that find their way here. Don’t be so naïve as to believe this is an offer you can refuse.”

I turned and ran, a chorus of laughter ringing in my ears.

And Hell followed after.