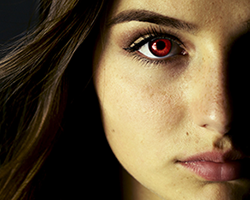 Dawn. The time of day when the sky is a dangerous shade of red; day has almost arrived but night has not yet left. I’d been out all night and not caught a damn thing. In fact, all I’d managed to do was lose my best knife down a drain and get a bat caught in my hair. Okay, it didn’t get caught – it just startled me.

Monster hunting’s supposed to be glamorous. I was bitten by a ghoul last week and my arm damn near went septic.

I jumped down off the wall I’d sat on and made my way home. I’d have to sharpen up a knife from the kitchen and use that. I didn’t have time during the day to go to the supermarket, and unfortunately my local Monster Hunter’s Hardware Supply Shop doesn’t exist.

I was shattered and wanted my bed, and preferably a hot drink as I was bloody freezing and had pretty much lost all feeling in my toes.

When I reached my front door I realised my keys were no longer in my pocket. I wondered if they’d been in my pocket at all that night, or whether I’d left them on the side in the kitchen. I’d done that before.

Lock picking isn’t in my repertoire. And my mother would kill me if she caught me breaking in. I cursed, stomped my feet on the doorstep to bring my numb toes back to life, and then knocked on the door. Nobody answered so I crouched down and peered through the letterbox.

“Bloody hell.” I stuck my arm inside and forced it in as far as it would go; I think I took some skin off. And I still couldn’t reach the door handle.

The shower was on in the bathroom upstairs. My dad would be getting ready for work. I pulled my arm back out of the letterbox and knocked on the door again, louder this time. He was singing now. Even through the door I could hear him singing.

“Open the bloody door!” I yelled. My elderly neighbour opened up her front door and peered out at me; her terrier squeezed past her heels and peed on the front lawn.

She wrapped her dressing gown tighter around herself, called her dog inside, and disappeared from view. She always ignored me.

I was about to hammer on the door again when it opened and Dad beamed at me. He wore only a towel. “Good night?” he asked.

“Good morning, Dad.” I squeezed past him into the house.

I went up to my room, closed the door behind me, and tossed my leather coat onto my chair. My laptop was still downloading a film. I left it on, though I shoved it under the bed as the hum would only keep me awake. My room had a blackout blind that didn’t quite black out the daylight, so I’d pinned a blanket to the wall to make it dark for when I slept during the day.

I took off my clothes, got into bed, and closed my eyes. It’s difficult to sleep with the neighbour’s dog yapping. I wondered briefly if I could do away with the bloody thing; claim that I had mistaken it for a monster.

In the end I decided I didn’t want to be done for terriercide and left my bed.

I had a coffee machine in my room. I also had a mini fridge. These things saved me from having to go downstairs all the time. Or out.

I made myself a coffee and took a sip. It was cold. Cold!

I heaved an irritable sigh and left it at that. Usually in this situation I would let out a stream of inventive curses, but I couldn’t be bothered. I get lazy when I’ve not killed anything for a while.

After I dragged my laptop back out from under the bed, I checked my emails. Most of them were from people taking the piss. Not only were they taking the piss, but they were also grammatically incorrect, which made them doubly annoying.

One read: “If your a monster hunter then im elvis.”

One email was from a person who truly believed they were a were-raccoon. Apparently, they knew who I was, where I lived, and would ‘come and get me’ if I so much as harmed a hair on any of their fellow were-raccoons’ heads.

I’m not entirely sure were-raccoons exist, though I know well enough by now that I shouldn’t dismiss anything. I once thought there were no such things as fairies until one broke into the house and randomly moved things around in my room – not very sinister but irritating nonetheless. Still, I wasn’t worried about raccoons, were or otherwise. Although some of them are pretty big.

I read all my emails and deleted the lot. Not one real offer of work among them. Advertising just doesn’t work for me. I returned to my bed and picked up my copy of the Monster Hunter’s Handbook thinking maybe that might send me off to sleep.

It’s strange how people think it’s not a real job and yet there are books on the subject. Chapter four was all about Cyclopes. I smirked when I read ‘restricted visibility’ listed as one of the weaknesses. Pointing out the obvious, isn’t it? Or am I just too good because I know this already?

Yawning, I let the book rest on my chest. I stared up at the ceiling for a while wondering if I’d look like a nutter if all I bought at the supermarket was one kitchen knife. Maybe I should buy a few.

I scratched my arm, heaved a sigh when the terrier yapped again, and removed the pillow from behind my head and pressed it over my face. That didn’t block out the noise, of course.

I removed the pillow and got out of bed again. In the gloom, I tripped over the Monster Hunter’s Handbook and stubbed my toe on the desk.

I cursed and limped the short distance to the window, lifting the blanket a little and peeling back the blind so I could peer outside. The light stabbed my eyes so I dropped the blanket back down.

“Bollocks.” I had hoped to see if the terrier was within range so I could throw something at it. The thing had shut up now anyway – it probably wasn’t worth the bother.

I returned to bed and pulled the covers up over my head. Why had the light hurt my eyes so much? Okay, my room was dark but still. I was probably turning into a vampire. That would be just my luck. Hang on. Maybe I was a vampire.