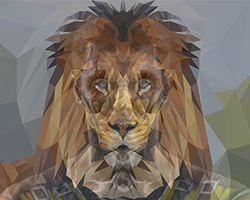 As I picked the tiny darts out of my body, I watched Kordan, my creator, peering through the small panel into the arena. He sensed my eyes upon him and turned to meet my look. He glanced down at the darts in my hand. His expression was pained—his great creations brought so low. I nodded to him; he nodded back. Not many can say they’ve met their creator and lived to talk of it.

The head of the recently deceased Master of Games, Obbas, rolled to one side, and his tongue flopped out. Emperor Brulum examined my reaction. I smiled and gave a shrug. “Wasn’t much use without his eyes, anyway.”

The Emperor chuckled. A figure stepped forward. “You know Urran, my Lord Marshall, of course?”

“From that incident in Kookan,” I answered. “I hope my transgressions have since been forgiven, Lord Marshall?”

“Forgiven,” he answered. “But not forgotten.” He pointed at the wall and gestured I turn around. “A precaution, you understand.”

I nodded and assumed the position. His frisking skills were the same as ever—bad. When he had removed my knife and some other trinkets, he nodded to the Emperor, who then gestured that I follow him.

“My bootlace,” I said, and bent down to tie it before any objected. The blood from Obbas pooled around my boot, and I grimaced in distaste.

“Even in death, he irritates,” said Emperor Brulum. He gestured to one of his guards. “Clean that up. You and three others stay here with Kordan.” The soldier saluted his obedience.

The Emperor led the way, down a long corridor followed by his Lord Marshall and then me, the remaining soldiers at my side and rear.

The room we entered was covered with monitors. The one which covered the arena action was largest of all. I could tell at a glance that the three remaining spiders, even the one with only one eye, moved against the fish man and friends with far greater precision and purpose than before. No surprise with Kordan at the controls.

Another monitor showed an array of warships, hovering outside the perimeters of the different Outerworlds. My stomach tightened at the sight of this, but it wasn’t such a surprise either. It was clear Brulum wanted all of us gone. Forever.

But the images which were transmitted from the Emperor’s podium did surprise me. The Emperor was sitting there, in full view of all, surrounded by his entourage.

I turned to see Emperor Brulum smirking a few feet away. He gestured to the image on the screen. “My doppelgänger,” he said. “A useful device. A fourth cousin, or something like that.” He winked at me. “One can never be too careful near a grand finale.”

I grinned back. “You’ve thought of everything, Your Majesty.”

He nodded. “I would hope so. A lot will change today, Lion Man. Including you, if you wish.” He clicked his fingers and a door to a side room slid open. Hung along the wall inside were what seemed like a set of carcasses. Among them, was my own. I tensed, and Brulum laughed. “Shells, my Lord Lion. Costumes. I hoped that one of the non-conspirators might survive to the end. And, to be honest, I’m happy it was you.”

He indicted I follow him into the smaller room. “It is not only gold I offer you Lion Man—but your humanity. Agree to my request, and Kordan shall change you back to your human self. Then, you shall first don your costume, and enter the arena when only the fish man remains. When you kill the fish man, who has led this conspiracy, warrior to warrior, you will remove the costume, and show to the world that you were always one of us. You will be the Human Who Single-Handedl Destroyed The Warrior Beasts. Thus shall the ‘noble savage’ be so thoroughly destroyed.”

My eyes widened as I looked over the grotesque, life-like costumes. I understood. This would remove the Altered from the minds of billions, not just in body—but in soul also. As fiendish and brilliant a plan as I might have expected from this sawn-off little runt.

“My alternative,” Brulum spoke, moving back into the larger room, “was a giant snake, courtesy of Kordan. But ‘Human versus Beast’, is so much the better story.”

I looked back at the screens in the main room. Two of the spiders had cornered the centaur, while a third moved in for the kill. The other players were trying to rescue him, but it was clear the horse creature was doomed. I followed Brulum back out into the bigger room and palmed the small dart I had hidden, then let it slide to my forefinger and thumb. I had already rubbed the tip of it along the inside of my boot, the one laced with poison. He would be dead in seconds. No doubt his soldiers would make sure I joined him in whatever hell existed, moments later. It was worth it.

A hand rested on my soldier. It was Lord Urran. He pressed my own knife he had taken into my side. He shook his head slowly, then took the dart very carefully from my fingers. He walked over to the Emperor, who had his back turned to us. He jabbed the dart into the Emperor’s neck. Emperor Brulum hit the floor, dead.

Lord Urran looked at the dart and turned to face me. “Impressive,” he said.

My mouth twitched a thousand questions, but none made it to my lips.

He looked up at the monitor which still had the Emperor’s ‘fourth cousin’ sitting in the royal podium, happily waving to the crowd. “His name is Ealace. A street urchin. He was brought to my intention a month ago. Kordan made the final touches, although, few were needed other than voice adjustment. It took quite a while to convince our late Emperor, of his necessity. Thankfully, the actions of the conspirators aided our cause.” He looked straight at me. “He shall make a fine Emperor Brulum, this Ealace boy. Certainly far more malleable and saner than his predecessor, don’t you think?”

I nodded, unsure my voice would hold steady.

He smiled back, then spoke to the nearby soldiers. “Tell Kordan the deed is done.” He turned back to me. “Go, Lion Man, join your fellow players. I have a feeling all of you shall have cause to celebrate victory, quite soon.”

I bowed, then paused. “Er, and the twelve thousand gold coins?”

The Lord Marshall raised an eyebrow. “To be spread among your peoples. Isn’t there a creed among players that goes something like, ‘Victory is Greater Than Gold’?”

I looked at him and shrugged. “If there is, I hope who ever said it, died screaming.”

But as I turned and walked away, I couldn’t stop a slow steady smile spread across my face.