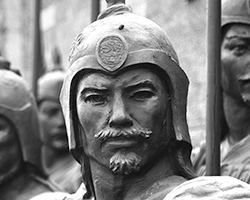 This is the story of a lord who mistook a diamond for a pebble, and threw it away.

Ba Renzhong hobbled through the wide streets of Tiangjin. Guards marched ahead and behind him, and he was shirtless so that the people lining the streets could see the marks of flogging ripped into his back. A heavy wooden cangue had been locked around his neck and both wrists. Until recently, he had been Lord Ximen’s general, and presided over a number of exile sentences himself. Despite being demoted to colonel, Lord Ximen had decreed his journey to Ganyang would be made as wretched as possible.

A few members of the crowd booed and jeered, but most watched in silence.

“Ba Renzhong! You saved my son from bandits! Gods protect you!” a woman cried out.

Ba smiled, and looked for her, but she ran away before the guards could find her.

Eventually he came to the gate from which the road to distant Ganyang began. A border province a hundred days away and full of criminals and barbarians, Lord Ximen had exiled him there as a death sentence. Ba looked this way and that, but there was no sign of his little brother, Ba Jiang.

Lord Ximen, leading the procession on horseback, turned around to face him. “Ba Renzhong, you worthless dog! Today I banish you from my city and province. Step foot in Tiangjin again and I’ll have your head!”

The nobleman rode away, followed by most of the soldiers. The crowd melted away too, a few pausing to wave farewell. In the end, only two soldiers remained. They shoved his back and a fresh burst of agony flared in Ba’s open wounds.

Ba started walking down the road. Neither man spoke to him, and he waited until they were far from Tiangjin before saying, “The road is very long, we ought to at least be civil. I don’t recognise either of you. What are your names?”

The nearer one cuffed him around the head. “I’m Master, and my friend is Lord. It isn’t your place to speak with us. Lord Ximen knew you couldn’t be trusted, so he brought us in from a neighbouring province to stop you escaping.”

As an officer, Ba had got to know the many types of soldier. Some were dutiful, others violent, some ferocious, and some thoughtful. These men were the worst type. They were bullies, skilful at oppressing the weak and innocent, useless at fighting the enemies of peace and order.

On and on he walked, occasionally getting a jab in the back from Master or Lord, just because they could. Ba gritted his teeth and kept walking. His guards drank wine and ate from their knapsacks, but even after a day and a half they hadn’t offered him a crumb. Arms aching, feet sore, thirsty, and stomach filled only with emptiness, Ba was miserable.

A wayside inn came over the horizon.

“Can we stop for something to eat and drink? I’m getting light-headed,” Ba asked.

Lord slapped him on the back, and his spine stiffened with pain. “Of course your head’s light. It’s empty!”

Despite that, the two ruffians escorted Ba into the inn. The innkeeper, seeing Ba’s cangue, ushered the men into a private room. Lord showed the innkeeper his official seal, guaranteeing free food and drink on the journey.

“Very good, sir. What would you like?” the innkeeper asked.

“Fine beef for me and my friend,” Master said, patting Lord on the arm, “your best wine for us both. And we’d each like a foot bath, we’ve been marching for a while.”

The innkeeper bobbed his head. “Yes, sir. And for your prisoner? We’ve had several this way over the years, there’s no need to keep his cangue on.”

Lord scowled. “He’s a notorious wretch. We’ll give him something ourselves, you don’t need to concern yourself.”

Ba leaned forward on his chair, resting his cangue on the table and glad to have the weight off his legs.

A short time later the innkeeper returned with wine and beef for the two guards, before fetching a foot bath for each of them.

“When we’re done with soaking our feet, you can have the water to slake your thirst,” Lord told Ba.

Two strikes with the corner of this cangue and I could kill you both, Ba thought. You should thank Heaven one man in this room has respect for the law.

The two guards chomped through their food, and then Master’s eyes bulged, his veins throbbed, and he slumped forward unconscious. Lord opened the door to the room and in walked Ba Jiang.

Jiang sat down as Lord unlocked the cangue. Renzhong rolled his wrists and stretched his arms.

“Lord Ximen paid off these two to put an end to you once you were in the middle of nowhere. Luckily, Ruan, or Lord as you knew him, has a brother who’s a friend of mine. A little silver can go a long way,” Ba Jiang explained. “We’ll go by horse to make up ground, then you can walk into Ganyang yourself.”

Ruan bowed his head. “My apologies for treating you so cruelly, but if I’d done otherwise Zhang would’ve realised something was up.”

More beef and wine was bought for Ba, who was so famished he could’ve eaten a mountain and swallowed a lake. Once he’d eaten his fill, he said farewell to Ruan. Ba’s brother had a pair of horses waiting, and the two men rode along happily.

“You saved my life, little brother. I shan’t forget this,” Ba said as he dismounted. Ganyang was only a couple of days away, and if he was caught on horseback he might receive extra punishment.

“We could still disappear, you know. I have plenty of cash for us to live a life of ease,” Ba Jiang suggested.

Ba shook his head. “I must pay the price for my failure. Go home, look after mother, and your wife. I’ll see you again someday.”

Ba Jiang rode away with both horses, and Ba walked on to Ganyang. After a day, near the city, a gang of brigands was attacking a few travellers. Ba cracked his knuckles and clenched his fists, and ran towards the fight.

Who was being attacked? Was Ba able to save them? Read on, if you would like to find out.