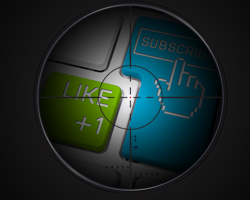 And… play. Livestream is go.

Five minutes from the deadline. It’s quiet on the feed, but that’s the usual traffic this early in the game. Any people that are on are prowlers, the ones who obsess about my technique over the actual closer.

@thereathee: what model rifle is that?

@punfisher118: did he adjust for wind?

@feulkllr: @punfisher118 she, and yeah she did. She’s taken trickier shots than this.

Buncha nerds, geeking out about the little things. But prowlers and gun nuts justify the ad revenue alone. Gotta love ’em for that. Now if they only pledged more than the bare base donation amount. Cheapskates.

Speaking of pledges: @doogiebowser just signed up for $120 per month. Not many go for the bullet cam, considering how up close and personal it gets. Probably a weirdo, but the best kind of weirdo: one with disposable income.

Four minutes. The mark is in his office. Lock on to his bio-sig. More viewers join the feed. Likes hit into the five hundreds.

@quallyduck: yay, mark in sight. Go for a headshot!

@manie-eck: who is she trying to hit?

Dang. Read the rules, people. I slap the comment with a redaction and block @manie-eck. Hate to do it, but discussing the mark’s identity is on the no-no list. Nearly lost a shot because of blabbermouths once. Nearly.

Three minutes. The feed fills up even more, with likes now going up in the thousands. They chatter about my tools. A few go back and forth about whether I got the right vantage point, or if something could interfere with the shot. It’s cute, but this ain’t amateur night, people.

Bing. A call on the client line. This late into a closer? Son of a bitch. Swipe to green, keeping my eye locked on the mark.

“Well, we love your work, and we’re having trouble with a guy at our job, a Ma—,”

“No names. You want it quick and easy, or are you shopping for a specialty service?”

“Well, that’s the thing,” he mutters. “We don’t have the cash to pay you for it, so we were hoping you’d be willing to work for the exposure. It’s a high-profile gig. Really.”

One of these. I say nothing. The mark is on the phone with my client, who is all the way across town as part of her alibi. I leave the guy hanging on the line. “Hello?  You still there?” he mutters.

“Well, we figured that since this is such a high-profile hit, you’d be okay with accepting it for just the media attention. You could live stream the entire thing. Really, you’re doing it for the art anyway, so you’d be fine with doing it unpaid, right?”

“What the fuck, bro!” a second one jumps in.  “Aren’t you an artist?  Do it for the art. Just do your job! Greedy asshole. Doesn’t your Pay-Tree-1 provide you with enough cash? You people are a bunch of greedy douchebags!”

I could go on about how it’s the pledges that allow me to do this job full-time. I could do the same old spiel about how plumbers expect payment for their work, and cleaners like me need to eat too. I could take a cheap shot at him for calling me ‘bro’, or even threaten him for a while with ‘the voice’. But after nearly eighty requests on my Skeeter, Mailzr, Doclock and in once case a post on something called Twimblr, I’m tired of lecturing idiots about basic economics.

“Pompous jackass! Your feed sucks anyway. You—,” the second guy growls, going off on a rant that I’ve heard a million times before from losers much more intimidating than him. I cut the audio, select the playback and post it to my feed. Whoever it is they want marked for a hit might just recognize their voices, should they be a subscriber.

Ten seconds. The mark’s hung up the phone. He takes a cigar from a box and lights it up. Enjoy it, buddy.

And… pop. It takes two seconds for it to hit. The mark drops to the floor. Didn’t feel a thing. Time to get going. But first…

“Hey, everyone. This is Sal. Thank you all so much for watching the live stream of my hit. As always, give this hit a like, and if you want to see more, subscribe to my live-feed. Special shout-out to my supporters and pledgers. If you need a hit performed, check out my commission fees on the main page. All fees are non-negotiable, so please don’t try. I will be angry. Ta-ta for now.”

I end the feed, snap the rifle apart, separating the pieces that I can pass off as household items and slip them into my backpack, while I hide the rest in my leg compartment. Done and out with three minutes to spare. Job well done.

It’s still early, but I’ve got to lay low for now. Home it is, with an evening of updating my feeds and accounts while I binge-watch Terror-man. Taking the south route home, since I’ve got Yogichama Ramen to promote per my ad contract, and their biggest billboard in the city is on the way home.