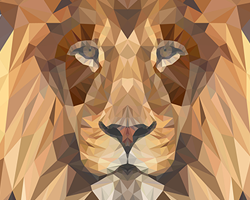 There was little I could do. The lion man was as good as dead. The giant spider was but feet away from him, ready to pounce, when one of the other spiders collided into it.

I shaded my eyes to see that on top of this other spider was the crab man, who held both of the spider’s pincers in his one large claw, and was now guiding the creature at will.

“My own personal monster,” the crab man shouted.

Leo signalled his thanks. The crowd, silent up to this point, gave out a loud cheer. They were cheering that the life of an Altered had been saved. I looked over at Orrin. The significance of this was not lost on him.

The spider on the receiving end of the collision gave a might roar and lowered its head, crashing into the side of the crab man’s ride, throwing him to the ground. Maheras, the centaur, scooped the crab man up onto his back to another rapturous applause from the crowd. Maheras galloped up and down in a tight pattern, throwing his forelegs into the air and neighing loudly, while the crab man held on with clenched legs, and raised his one claw in salute to the crowd. They cheered even harder. Brulum may well win the upcoming war, but he was losing this battle.

The spider continued to attack his fellow monstrosity, as the crowd wailed with laughter. One spider eliminated, two distracted, and one now missing two legs thanks to Orrin and Sarsha. And even better, because of the two fighting spiders and the crippled one, neither of remaining the two could get through to us for now. I signalled that we come together, but Leo shook his head. Had those tiny darts been poisoned?

The crab man, Maheras, Ulserra, Orrin and Sarsha formed a tight line behind me. “We have to assume each attack we make is recorded by each and transmitted to the other spiders. So, each attack we make must be different.” The others nodded in agreement. The crippled spider hobbled towards us. “I’ll move first.” Although damaged, the creature was no less ferocious. Its eyes locked on me. I walked away.

The creature, somewhat confused turned to follow my trajectory. As it did, its weight went onto its one single leg, just for a brief moment, but long enough for me to shoot a jet of ink under it. The spider upended onto its back, like a giant grotesque beetle. I signalled to Orrin. He understood. The underbelly of the spiders would likely be softer metal than their armoured backs or legs.

Orrin gestured to Maheras and the crab man what he wanted them to do. Moments later the centaur gathered enough speed. As he sped by Orrin, the crab man reached down and took Orrin’s outstretched arms and with a mighty swing he propelled the goat man up and onto the spiders exposed underside. The creature roared and wriggled in protest. Orrin released his acids, and within seconds the spiders wriggling had stopped.

Two eliminated, four to go. It was then the chanting started.

The crowd was with us. I looked up to the Emperor’s seat. He was not there. Too embarrassed by this turn of events, I guessed. The bodies of the two dead spiders now acted as both barriers and vantage points for us. Ulserra, Sarsha and the crab man joined Orrin on top of the upturned, immobilised spider, to ecstatic cheers from the crowd. Ever the showman, the crab rose his claw into the air, pumping it up and down in time with the cheers.

I gestured to Maheras, and pointed at the two spiders who were fighting each other. He took aim with his bow and arrow, taking out the eye of one of them. He repeated this feat with the second spider. I ran towards both as they roared out in pain and anguish, and jumped up onto the nearer one’s head and neck, using the arrow as a grip. I took out my concealed knife and drove it hard down into the creatures other eye. It did not roar, it did not toss its head into the air, as I expected. It simply fell to the ground, dead. The other spider turned and fled. The crowd gave a tremendous roar—and in that moment, a panel door drooped open.

The Emperor stood inside the panel in the shadows, flanked by a number of soldiers each side, and in front by two who held a glass shield between them. I could see the outline of a dagger in the Emperor’s right hand with his free arm around someone’s neck.

Another figure emerged from the shadows. We all recognised the figure of Kordan, though it was many years since we had been altered by him. In his hands he held a control box.

“You, the lion and the crab,” the Emperor hissed below the noise of the crowd. “Come with me, now, and your lives will be spared. You are not part of the treachery I have uncovered. Come, and you shall both be well rewarded.”

The crab man jumped off the dead spider he was using as a platform, and hit the ground running. He picked up a piece of broken spear as he ran, aiming it at the hidden Emperor. A series of darts thumped out from the panels and the crab collapsed into the dirt. All eyes were now on the lion man. He glanced at us each in turn, smiled, then proceeded to enter into the panel. He took a position near the soldiers.

“A wise choice, lion.” Brulum said. “This is what we do to traitors.” He ran his knife across the throat of Obbas the Games Master, who dropped to the ground like a wet sack.

The panel slid closed, but a thinner one opened, from which the eyes of our creator, peeped out.