The Twelve – The Goat Man 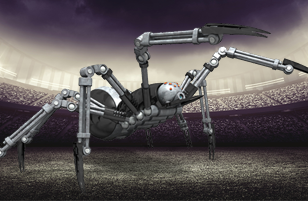 The arena was silent. I looked at the six mechanical monstrosities, then up at the crowd. None were cheering. None clapped their hands or stamped their feet. Brulum had overplayed his hand. He lacked his uncle Arak’s finesse. An empire was taken with fist, but held with heart.

A ruler who murdered his people, could never be loved. Arak knew that. The original fables of the great strength and prowess of the Altered—created to work where humans normally could not; the solar fields, the uranium mines and other equally harsh landscapes—turned to tales of barbarism and savage cruelty, when our purpose had been fulfilled. But Arak’s story weavers had proven too effective. The Altered still held some sense of awe and mysticism for the citizenry of Galicia.

We were the pure, the free, the ‘noble savage,’ they themselves often longed to be—but could never be. We bolstered their drowned dreams with the imagined possibilities of courageous action, and dynamic true-hearted purpose.

Killing hope was a dangerous game, a game of exceptional skill. A skill this boy Emperor, for all his ruthless instinct, did not possess.

To the Galician we were still people. Barbarians, yes—but no less worthy for that.  We were the warrior heart. To see their dreams of failed freedom torn apart, warrior to warrior, hero to hero, was a story they could believe in.

We were not yet dogs to be savaged by mechanical monsters.

I looked at Brulum. It was clear he realised his mistake. But there was nothing he could do. If he withdrew the monsters now, he would be seen as weak. But then I saw his face lock into a hard cruel mask. To hell with heart it said, if fist is how I must rule, then fist it shall be.

“Orrin,” a voice said beside me. Soldan looked as calm as ever, truly a great warrior. “We must stand together, combine our skills. The pretence of spectacle is over.”

I nodded agreement. The centaur Maheras and Sarsha did likewise. Soldan looked to Ulserra. She was staring up into the arena, her grey blue scales shimmering in the blaring sun. “The crowd,” she said. “They have fallen silent.”

“Aye,” a voice said, “even they know the basic rules of engagement, and when they’ve been broken.” It was the crab man. Behind him was Leo the lion man.

Soldan eyed them warily. “What can we do for you two, gentlemen?”

“We’re not fools fish,” the crab answered. “This is no tournament. This is a slaughterhouse.”

Soldan looked at the lion man. “You agree?”

The lion man shrugged. “All I know is boy wonder up there,” he pointed to the Emperor, “ain’t playing fair. So, now we don’t play fair.”

The clunk of the six spiders echoed through the arena. All of us turned to watch them approach. “So, fish man,” said Leo, without taking his eyes off the spiders, “we reckon you’re the brains of the operation. What’s our play?”

“We take them, one by one,” said Soldan. “The arena narrows at both ends. At most three can move against us at any one time, as long as we stay either end. There’s seven of us. So that means three of us attack centre, and four split to form two pairs to keep the remaining creatures busy.”

“Distract them, irritate them, and if you engage, weaken them only—then step back. Don’t take unnecessary risks.”

“Me, you and Ulserra—Libra, will take centre. We’re the most experienced. Virgo and Capricorn one pair, the crab and the centaur the other, do the distracting. Agreed?”

All indicated agreement. A terrible screech sounded from the creatures as they moved closer. They had just realised only half their number could move forward as the arena narrowed, and the three left behind were venting their frustration. It was truly a sickening sound.

We broke into three distinct groups. A gap opened between the three creatures as each targeted its own prey.

The spiders were now but ten feet away. Sarsha stepped forward and a bolt of light shot out from her eyes and hands, hitting the creature which had chosen us. It stopped in its tracks, stunned. The effect would only last for a few minutes.

I ran forward and wrapped my body around one of its legs. I released the acids from my pores and the leg dissolved. I moved on to the next leg before it regained its senses, all the while keeping an eye of Soldan and the others.

The centaur galloped in circles around their spider, even under its body, causing the creature to become somewhat unbalanced as it followed the centaur’s movements. The crab caught hold of one of the spider’s own claws, and was holding on for dear life, trying to break it. It would have looked comical if it were not so deadly.

In the attack group in the centre, Ulserra was the first to move. She somersaulted towards the centre spider, using her shields as giant pads to gain traction along the ground. Inches away from the spider, she pirouetted up on to its back. The creature roared in anger. She slammed one of her shields right into the creature’s face, severing two of its three horns in the process. The spider let out a horrendous cry. It jerked its head up into the air and Ulserra flew backwards on to the hard dirt. She managed to land on her feet, just missing Soldan who was now right in front of the beast. The fish man sprayed a sheet of ink into the creature’s eyes. It stopped, blinded.

Ulserra hunched down and scrunched up into a ball, her shields on top. Soldan gestured to the lion man who ran forward, and using Ulserra’s body as a launching pad, he leap up on to the beast. The spider’s claws blindly snapped the air in all directions, but the lion man easily dodged these futile attempts to catch him. He jabbed his knife deep into the spider’s neck, and sliced across. The creature gurgled a scream. It froze and then collapsed to the ground.

At that moment a number of small holes appeared in the panels, and from them a stream of tiny darts shot out. At least three hit the lion man in his shoulder. The holes closed as quickly as they had opened. The lion man fell to the ground.

A voice sounded from behind the panel. “Fight your own fight, lion man. Or you shall see no Galician coin.”

The lion man sat up and rubbed his shoulder, disorientated. As he gathered his thoughts he saw the body of the spider he had just killed rise up into the air. One of the remaining spiders held the dead body on its horns. He tossed his beaten comrade behind him and let out a mighty roar. Then he charged straight at the lion man.