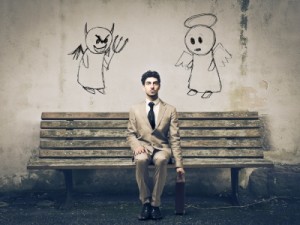 The bench made my backside ache, but I had to do my good deed for the day and it was the ideal spot for a bit of people watching.

A park lay directly opposite and an old woman walked an equally-as-old-looking dog up to a tree, where it pissed and then kicked grass up at its feet.

Maybe I could help her cross the road…

A young woman wandered past the railings, outside the park. She had bare legs. Long, bare legs. And she was eating a sandwich, licking her fingers in a way that I thought was entirely far too suggestive for that time of day.

I glanced skywards and mouthed a silent prayer. Let her come over here.

The woman, no, she was a girl – seventeen – noticed the bench and she crossed the road to sit by my side. She bit into the sandwich, crisp lettuce crunching between her teeth.

“Sometimes,” she said, swallowing, “it would be nice just to… just to go somewhere. You know? Like, somewhere in your head or something. So you didn’t have to deal with all this crap all the time.”

She brushed breadcrumbs off her lap and onto the pavement. Pigeons gobbled them up and then started back as she scrunched up the brown paper bag that had contained her sandwiches.

Perfect. She would do nicely.

“Have you tried reading a book?” I suggested.

She made a face. “No.” She threw the screwed up bag towards the bin, missed, and let out a growl of annoyance.

“You should try it,” I said, watching as she got off the bench, trying not to watch even closer as she bent to retrieve her litter. She was wearing a very short skirt. I could almost see—

“I want… what’s it called?” she asked. “Escapism. Maybe I should do drugs.”

“I don’t think you should do drugs,” I said. “They’ll addle your brain. Seriously, try reading.”

The girl deposited the bag in the bin and rolled her eyes at me. “Whatever,” she said. “I don’t even know why I’m telling you all this stuff anyway.”

“Probably needed someone to talk to,” I said. And I shrugged.

The girl sat down by my side again and watched the pigeons as they cooed and strutted on the pavement. One of them pecked at a piece of chewing gum and I wrinkled my nose.

“I’m indifferent to pigeons,” I said.

A puzzled look crossed her face and then she watched the birds again.

I watched her. She wasn’t pretty. Her lips were too fat and her ears were too big. She was blonde and I much preferred brunettes. Still, it had been a long time and it wouldn’t hurt…

“Sometimes I just want to stop,” she said. “But not like, die or anything. I’ve got things to do. You know?”

She shrugged. A bus drove down the road farting pollution and a man on a bicycle came by the other way. I waited.

“Have kids or something, I suppose,” she said. “Get married.”

“Well, those are good things to do,” I said. I glanced up at the sky briefly and she followed my gaze.

“Nothing.” I brushed non-existent crumbs from my own lap, causing the pigeons some confusion. I frowned over my smart work trousers and wished I was wearing jeans. I suspected the girl was more attracted to men in jeans.

She nodded and picked at peeling paint on the bench. “You waiting for a bus or something?”

She smiled at me. Her eyes were a nondescript grey. “You don’t sound sure. You either are or you aren’t.”

“What was it then?” she asked.

The pigeons’ constant noise became louder and I looked at them. “You, probably,” I admitted. I didn’t look at her in case it scared her off. I felt her shift on the bench – it creaked beneath me.

“You’re not gonna kill me or kidnap me or something, are you?” she asked.

I shook my head. “I’m working.” I could feel her staring at me so I chanced a glance in her direction. “I’m a… counsellor,” I said. “Sort of.”

I scratched my cheek and glanced upwards again. I was starting not to like my job. I just wanted to get laid and go home.

“People talk to me,” I said. “They tell me things they wouldn’t tell other people.”

“What’s your name?” she asked.

I found myself looking around for inspiration but all that lay in front of me were the pigeons and the pavement and the road. “Bird,” I said. “Mr Bird.”

I didn’t smile. My face didn’t really do smiling. “Fair enough,” I said. “Pleased to meet you, Miss Bench.”

She did smile. “Tell me about books then, Mr Bird,” she said.

And I did. I told her all the things she wanted to hear. I told her that she could do anything she put her mind to, that she was a good person and could achieve great things. And she laughed and thanked me and left me alone on the bench with the pigeons.

I heaved a sigh and looked up to the heavens. I’d fallen a long time ago; I must have done enough good to get back home by now.