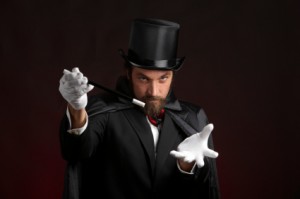 “My name is Vigo Hanesh and I’m a conjurer.”

The auditorium reeked of late-afternoon apathy and crushed egos. Everyone – the production team, stage security, the three judges – looked sweaty and tired.

The judges stirred in their seats – Ms Simper and Messrs Gushing and Hardass.

Gushing spoke between sips of tepid mineral water. “Well, Vigo, what are you going to show us today?”

I removed my frock coat to reveal rolled shirts sleeves and a tight-fitting waistcoat. “I’ll forgo the usual hocus-pocus in favour of brevity. Simply put, I’ll produce any three items you care to name, as long as they’re small enough to fit under my coat.”

Simper stared at me, dull-eyed and listless. Hardass looked up from his notes, tapping his gold-plated pen. Gushing licked his lips. “Anything? How can you possibly know what we’d ask for?”

“Any three objects you care to name.” I smiled. “Ladies first.”

Simper blinked, seemingly unsure of what was happening. “Ah, well… flowers. A bunch of flowers, that’s what you’re supposed to make appear, isn’t it?”

“And what type would you prefer?”

My smile became a little forced. “What are your favourites?”

I shook my coat and hung it from my left forearm. After a moment’s delay I revealed a dozen heavy-headed blooms in my right hand. Dark red roses; velvety, with drops of dew on the curved petals, bound with a pink ribbon.

Simper laughed with delight, clapping her hands, looking and sounding like a twelve-year-old. Gushing gasped, his eyes bulging with disbelief. Hardass stopped fiddling with his pen and stared at me, but I didn’t meet his gaze.

I moved forward and presented Ms Simper with the bouquet before bowing slightly towards Gushing. “Now, sir, what would you have me produce for you?”

For a moment his mouth worked but no sound emerged, an uncharacteristic silence for the man. Gushing coughed. “A pig, a micro pig. Alive. You do that and I’ll offer you a contract, regardless of how far you progress in the competition.”

I knelt down and lifted the struggling animal free from the folds of cloth. I heard applause from off-stage right. Gushing came out from behind the desk and took the creature. He walked back to his seat, gazing at me like I was a succulent meal placed before a starving man.

I brushed some dust from my coat and turned to face Hardass. His face was set like stone apart from a small tic in his left jaw. I smiled. “Now–”

“The maglev shunt from a fusion bypass controller.”

I tried to suppress a grin. “Right or left manifold?”

I could sense confusion in the room as I knelt down, making a tent out of the coat spread between both arms. I left the heavy piece of electromechanical machinery  on the stage and stood, revealing it with a flourish. Before Hardass could react I moved quickly to the finale of my act. “And now, ladies and gentlemen, a bonus manifestation.”

I dropped my coat, revealing a Heckler & Koch MP5 submachine gun, the sound-suppressed version. I opened fire on Ms Simper first as I’d pegged her as a screamer, then the side-stage group. Finally, a full-auto scythe, cutting down the recording crew and Gushing, who was running up the aisle. The pig vanished.

It took less than seven seconds.

Hardass folded his arms and sat back, seemingly unconcerned by the carnage. “What are you, a temporal skip-tracer? This is a bit heavy-handed for the Bureau, unless tactics have changed since I left.”

The scattered blooms on the desk dripped blood as red as their petals. Despite the silenced kills I couldn’t afford a long-winded confrontation and raised my weapon. “I’m Bureau, but this falls under the heading of private enterprise. The temporal bounty on you has been hiked so I’ve made sure no one else knows when you are. The new body is a nice touch, by the way.”

Hardass smiled. “If you like it here then why not stay? I can make you famous as a stage magician, although you’ll have to tone down the manifestations a bit, obviously. I can have all this–” He gestured around the room, “–passed off as a terrorist outrage. It will even add to your notoriety and give the publicity campaign a dark twist.”

“Fame and fortune? Right up to the point  I turn my back and you kill me.”

He laughed. “I’d have no motive to do so. In fact, I can see you as one of my biggest money-spinners. An exclusive lifetime contract in return for supplying you with a new persona for this particular here-and-now.”

I hesitated. The sensory pleasures available to those in the twenty-first century were legendary, rivalling the best that uber-reality simulation could offer beyond the chrono-divide. It was possible as long as I – we – didn’t cause too many temporal ripples. I passed my coat over the gun and turned it into empty space.

Hardass relaxed a little and fished out his mobile phone. “Smart move. I’m just calling the police but we’ll be long gone before they get here. It will take a day or so to arrange a new background for you, but that can be explained away as you going to ground in the aftermath, afraid for your life, blah, blah, blah. Can you speak any other languages?”

“Serbo-Croat? With your features and skin tone you could easily come from any number of Balkan hellholes. Places where the locals don’t answer questions on general principle…” He half-turned away, talking to the emergency services on his phone. While waiting I vanished the engine component and put my coat back on.

My new manager turned back to face me, snapping his mobile shut. “Right, they’re on their way, and so are we. Side exit, my car, look scared in case there are any press hanging about.”

“No problem. Incidentally, how informal do you want me to be in private?”

He smiled. “Just call me Simon…”