Eyes in the Shadows 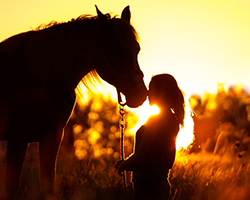 The watcher was back, an unseen presence that sent prickles of warning racing across Eilish’s skin. The horse fidgeted and snatched at the bit until Eilish soothed her with a hand on her neck.

‘Easy, Lady. It’s just me being silly.’ She glanced at her wristwatch and turned for home with a slight shiver.

The girl had the look of his Eithne: creases at the corners of eyes that easily smiled, and the toss of a head that cared not for convention. The watcher’s earth-chained spirit had felt no warmth or cold for three hundred years, but loneliness? Yes, he felt that.

Eilish had always enjoyed sitting in the sunshine with her sketchpad and watercolours, leaning her back against the sun-warmed stone walls of the ruined cottage. But it had begun to feel chilly, even on a bright day. Now, she rarely climbed the stile to the rocky glen.

Today, though, she’d agreed to help Wallace move his straying sheep back to their own field. Maybe it wouldn’t be so bad with company: she couldn’t imagine the old farmer being disturbed by ghosts. But shadows still moved at the edge of her vision, and a cold current of air brushed her cheek, smelling of damp earth. She ran to catch up with Wallace, her heart thumping painfully in her chest.

However hard the watcher tried, his hand passed straight through her face. She shivered, but not as before. Back then, in another lifetime, the touch of his lips had made her tremble, and the sweetness of her breath had warmed his soul. But his Eithne had left him, her life blown away like ashes on the wind.

It had been Valentine’s Day, seventeen forty-seven. The perfect day. Flowers and a simple silver ring. And then he’d killed her.

Valentine’s Day came only once a year, the traditional day for proposals of marriage. As Eilish groomed the mare, humming under her breath, she listened for car tyres scrunching across the gravel track. Her skin flushed with anticipation, needing more than ever to be wrapped in the warmth of her lover’s arms.

Her heart lifted at the beloved voice, calling her name.

Another woman. She was kissing a woman as she might a man! How could she betray his love so, tonight of all nights? The watcher clenched fists that could no longer strike anyone. She was going to spoil it all again, just like last time.

He must not let his temper get the better of him. He made himself remember the love in Eithne’s eyes when she looked at him, the touch of her fingertips on his face, and he calmed.

Eilish lay in silence, her head resting on Sorcha’s shoulder. The old farmhouse creaked and groaned as its timbers settled for the night, but Eilish no longer listened. She felt safe for the first time in months.

Sorcha offered to walk out to the barn with her, to do the last check of the horses, but her lover looked so comfortable, stretched out on the old, overstuffed sofa, that she hated to disturb her.

‘She asked me, Lady,’ Eilish whispered into the mare’s ear. Lady blew warm breath down her neck, lipping at the hair curling on her shoulders. Eilish pressed her face into the fragrant mane. ‘We’re going to be married.’

No! That could not be. She belonged to him, not to some woman. What unnatural creature was this? The watcher stormed out. A few wisps of hay blew across the barn in a miniature whirlwind that made the mare snort and pull back with wild eyes.

With joy flooding her, Eilish tied a rope around the mare’s neck and opened the stable door. The horse stood quietly as she climbed on from the wall, tucking her skirt up out of the way. Unshod feet made little sound on the moss as they rode through dappled shadows. Once on the grass, she dug her heels into the horse’s sides, and they took off, moving as one through cool darkness.

Wind rushed past Eilish’s face, caressing her skin. The horse’s muscles moved between her bare thighs with a rhythm that echoed the joyous beating of her heart. She flung her head back and cried out to the empty sky. ‘I’m in love!’

The hay in the barn was a revelation to him. It seemed he could move things when he was aroused by strong emotions. In the end, it was easy. All it took was a little push on a rotten branch.

As the horse swerved, the girl lost her grip. She plunged to the ground, and her neck snapped like green wood. So clean; so quick. No blood. A terrible accident, just like Eithne‘s.

She was as beautiful in death as she had been in life, her features unmarred by age or disease. He knelt beside her on the soft turf, wanting to tuck the loose strand of hair back behind her ear. But where was her soul? Her beautiful spirit, that was to stay with him and comfort him in Eithne‘s place?

A voice spoke softly in his ear, a voice he had not heard in three hundred years. ‘Why, Luther? This girl did you no more harm than I did. She didn‘t deserve to die.’

His cold heart lurched. ‘No harm? You betrayed me, Eithne, then you left me. I’ve been so lonely.’

‘I had no choice, love. I was moved onwards, whether I willed it or no, just as your spirit is bound to the earth by your own actions.’

‘Until you make reparation for the innocent lives you’ve taken.’

His breath hissed out as a cold blast. ‘Innocent? How can you claim to be innocent, who kissed another man? And her? What innocence is there in kissing a woman as a lover?’

Eithne shook her head, fading backwards into the trees. ‘You have it wrong, love. Unselfish love can never be a sin. And I? Was it a sin to kiss my brother, home from his flight with the Bonny Prince? You have ever been too quick to judge, but now you have all the time in the world to learn to understand.‘ Her voice faded. ‘Learn your lesson well, love. ‘