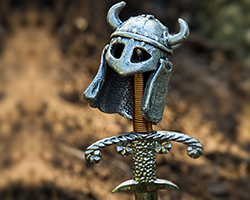 How could they sit and eat—like fat sedated cows, while their fellow beings were carted off like chattel?

Three lives gone is as many minutes…

I could not say I knew the bull, or the twin-headed warrior from the Outerworld of Aldron, but I did know their suffering. I knew every curse; every sneer, every glance of contempt that they experienced.

I looked up at the crowd. They laughed and chatted among themselves, swapping gossip, gesturing greetings, occasionally glancing down as the Emperor’s soldiers removed the ‘debris’ from the arena floor. Had they really no empathy for us. None? I felt a hand on my shoulder. It was Soldan. “Ulserra, join us.”

I nodded my consent but as I turned to go, I caught a glimpse of Cerissa’s hair draped over the death cart—being pulled away forever. I tensed up, but Soldan’s grip grew stronger. “Ulserra, we must not forget our greater purpose.”

I took a breath and relaxed my body. I looked over to the others. Sarsha, Maheras and Orrin: a virgin, a diplomat, and an old man. Their tournament names, Virgo, Sagittarius and Capricorn seemed especially chosen just to mock them. And what of me? Libra, the ‘Juggler,’ the clown, the scaly witch of the sea. The time for a noble victory was over. This circus had to end, now.

Capricorn spoke first. “This is not a war of might, this is a war of right. Killing the Emperor has no purpose if done without honour.”

Both the virgin and the diplomat nodded in agreement. Soldan shook his head. “Orrin, I understand your ideas, but if we are left with a choice failing to kill him with honour—or killing him without honour—I shall favour the latter.”

“Soldan,” Maheras said softly, “I shot an arrow into the back of a good friend to preserve that honour. Do you ask me now to renege on our pledge? To betray Emeran’s memory?”

I sighed. “Emeran himself reneged on it—the moment he broke ranks and went for the Emperor alone. So did Cerissa.”

“If we now attack the Emperor without Orrin’s speech, without a clear framework of ideology, we are no better than our oppressors,” the centaur urged.

“The master of games has been removed Maheras,” I said curtly, “how can we now ensure the speech shall be heard?”

“His removal plays to our benefit, child,” Orrin answered. “Out of the limelight, he can act with impunity.”

“If he’s still alive,” Soldan said. “Orrin, you taught me many years ago that the reed is stronger than the oak when a strong wind blows hard; that to bend to change is wiser than to break on stubbornness. Well, we are in a gale now, and it will only get worse. Who knows what further so called ‘props’ are to come? We must attack the emperor now, together—and without ceremony— while we still have the strength.”

I gestured towards the crab and the lion man who were lurking in the distance. “What about them?”

“He killed a rival from behind, Sasha, nothing more,” Maheras answered. “If we are to act, it must be us five only.”

Before the centaur, could answer a whirring noise echoed throughout the arena. A series of large hooks hurtled along a rail attached to the top of the arena walls. The hooks ran the full perimeter of the arena then disappeared back into a panel at the far end. I looked at the others. Was this a message of some kind? A few moments later, the hooks returned, but this time each carried a ragged sack of some kind. These hooked sacks were followed by a troop of lance-armed soldiers.

As the hooks drew closer I realised the items hanging from them were not sacks. My throat ran dry; my mind reeled in shock.

The hooks shuttled towards us. On each hook hung the corpses of our dead comrades, their lifeless bodies dangled like ghoulish scarecrows. It was obvious each had been beaten and battered to heighten their horrendous appearance.

The parade of corpses stopped in the centre of the arena. The soldiers gathered each side of this macabre spectacle.

The crowd was deathly silent. But then a wild laugh sounded from near the Emperor’s cortège, then another, and another. Within seconds the crowd joined in, jeering and laughing.

The Emperor stood up. “Citizens, I give you the ‘great warriors’ of the Outerlands.” The crowd cheered. “Friends, let them not go to the Underworld hungry. Let us feed them.” He threw some food at the corpses. The crowd cheered wildly. Pieces of food and half full flasks of wine flew from the arena seats towards the five lifeless bodies.

Everything went red. My heart pounded in my ears. A hand grabbed my arm. It was the centaur. “Don’t do it, Ulserra. They’ll hack you down.”

A blur passed both of us. It was the crab. He roared—a roar that silenced the entire arena.

“Monsters! Monsters! We are not the monsters. You are! You are!” He ran towards the nearest corpse, the bull. “Take him down! Take him down, you butchering monsters!”

I tried to run forward; Maheras’s grip was weakening. Soldan grabbed my other arm. “It’s bait,” he hissed. “We need you Ulserra. Do not die in vain.” I knew he was right, but I could not stop the urge to run and kill everything before me. But their combined strength held me in check.

The soldiers formed a half circle around the crab man, but he paid no heed. He attempted to lift the broken body of the bull off its hook. The soldiers lowered their lances towards him. As they did, six large centre panels clunked to the ground. At the sound of this, the soldiers righted their lances and quickly trotted back to the far exit.

I heard the sound of metal clicking against metal. Six giant spider-looking creatures; half flesh, half metallic, entered through these panels and met in the middle of the arena. They formed a tight line of dark snarling mouths and snapping claws.

Another noise sounded and a series of steel mesh triangles arched upwards from the top of all panels. The triangles met each other and locked together to form a giant dome of steel above us.

The circus had begun in earnest.