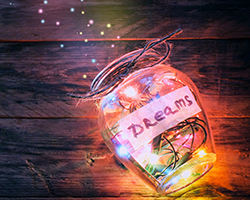 What do you get someone who has everything? I have everything I ever wanted – the swanky apartment in the City, the fast cars, the racing bike, the expensive holidays. I don’t go to work because I don’t have to; I could employ someone else to do it all for me. My parents were rich. They died. They left me everything.

Money doesn’t make you happy. That’s what people with no money say. Money made me very happy.

I grew bored, though. After I had travelled the world, I base-jumped. I scuba-dived. I climbed the highest mountains. I went into space. I did it all. I experienced everything, even things I didn’t like very much just for something to do. I had relationships with men as well as women. I’m pretty sure I was the modern-day equivalent of Dorian Gray.

But God, I was bored.

That’s when I heard about Dream Box. The vast majority of drugs have been legal for so long now that nobody really bothers with them anymore, but the Dream Box was something else.

People sold their dreams to be stored in a box and, for a price, you could live that dream. And I’m not talking the ‘move out to a little house in the country’ type dreams. I’m talking the weird ones some people have when they fall asleep. I slept with a woman who, once she’d had her coffee in the morning, told me that she’d dreamed she was the captain of the most fearsome pirate ship that had ever sailed the seas. She’d fought with a cutlass and killed many men. She’d battled a giant squid and won.

I didn’t have dreams like that, I’d said. She had smiled at me and told me I was missing out.

“I think I’ll sell that one,” she said. She put her coffee cup in my sink and then rounded the island to head for the door.

“To a Dream Box. It doesn’t hurt. They plug you in, suck it out of your brain and give you the cash. Then someone else can experience it.”

I’d raised my eyebrows and followed after her. Dream Boxes were made in the basement under a tattoo parlour. It all smelled very clean. I was warned that the practice was illegal and that some people became addicted. I was told the cautionary tale of a man who’d become so addicted to living other people’s dreams that he didn’t wash, or go out, or eat… He died, obviously.

I didn’t care. Plug me in. I decided I wanted to try my lover’s pirate dream, so after it was sucked out of her brain, it was pushed into mine. I don’t understand the science behind it – there’s a… thing they put behind your ear that gets you connected and then it’s all to do with brainwaves.

Anyway, I fell asleep and dreamed I was a pirate. I fought with a cutlass and killed many men. I battled a giant squid and won. When I woke up, I felt more alive than I had for a long time.

I bought a Dream Box, paid for it to be filled, and took it home.

Look, you have to understand that I get bored easily. I think it’s a medical condition. I dreamed I was a werewolf and killed an entire village of people. In one dream, I built a robot and it killed me. In another, I couldn’t die at all though people kept shooting at me. There was one very odd dream where a dolphin murdered me by pushing a wooden spoon into my belly – I could still feel the sensation when I woke up. To be honest, that one put me off using the Dream Box for a while.

I kept thinking about it, though. But the most fun I had was when I was on the run after doing something horrific. The adrenalin was like nothing else.

The trouble with dreams is that they don’t last long enough. None of this is my fault. All I ever wanted to do was live.

I bought the sword from the antiques place just around the corner from my apartment. It really wasn’t sharp at all, so I sharpened it – the sensation of being killed with a blunt implement was still in my memory.

Then, I organised a party. I only invited people I didn’t like very much. Most of them were horrible anyway – the guy whose hands I cut off? He was beating his wife. That old bloke I skewered against the bathroom door? Pretty sure he was a paedophile. I was actually doing a good thing.

It felt a bit like I was dreaming. I thought maybe it was a dream.

I didn’t wake up. There was blood everywhere and people were screaming. A have-a-go hero wrestled me to the floor and got the sword off me. I punched him in the throat and ran.

The best days of my life were when I was constantly on edge. I was terrified and exhilarated all at the same time. Sirens closed in on me. Officers with dogs chased me from town to town.

I didn’t want to get caught because I didn’t want the fun to end, so when I killed that policewoman, you have to understand it wasn’t my fault! I wasn’t ready. She should’ve waited until I was bored with it all.

Hey, you won’t keep me in a cell all the time, will you? I’ll go out of my mind. You don’t know what it’s like having had everything, having done everything.

Prison will be a new experience, I suppose. Am I still dreaming?

I want to wake up now.