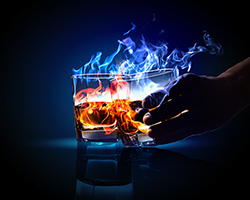 The spear had kept her in the mountains since leaving the miners, and she’d yearned to see – and walk on – something more pleasurable than deep snow and bare rock. Now at last she was overlooking a lush valley full of chokecherry, black plum and mulberry trees, much like the lands of her own tribe.

There, also, a village like her own: a scattering of earth lodges and rows of squash and beans. Some women worked – tending cooking pots, grinding grain – but most villagers sat in groups, talking. Laughter reached her.

Wistfulness enveloped Akiowa. How contented they looked. How happy. But then, the miners had seemed happy.

“Have they found happiness?” she whispered.

The spear gave no answer, but guided her down towards the village. Her heart lifted as she walked through woods glowing with autumn tints, though dismay grew at the lack of fruit on the trees – even the bitter chokecherries were stripped bare. Fruits were valuable food, but were far more valuable to the birds and beasts who shared the land. Only at a time of great need would her mother have allowed all to be picked.

As she neared the village, the spear put the Storyteller’s call into her mouth. Children raced to greet her, the adults following, led by a plump young man who wore eagle feathers at his shoulders, bear’s teeth at his neck – headman and shaman, both. The spear sent another thrill up her arm. Into her mind came an image of a much older man wearing the cape and necklace, berating a youth – this youth – for his indolence.

“Welcome, Storyteller!” said the young man. “I regret to tell you my father will hear no more of your tales. Last winter was the worst ever known, with snow thick on the ground even before the wolf-months. The spirits of many old folk left their bodies, my father’s among them. So the winter brought both gain and loss.”

Akiowa bowed her head, intending to say nothing, lest she reveal her shock at his words – the winter’s gain doubtless being his accession and freedom from further reproof. But the spear spoke through her: “Thank you for your welcome, Segenam.”

He flushed at the name, “Lazy” in the old tongue. “I am new-called,” he said stiffly. “I am Ohanko, He Who Finds.”

“What have you found?”

By happiness, he meant pleasure. That was immediately clear, since he talked of fellowship and laughter, of idle days, of his wives, food, and – confusing Akiowa greatly – drink.

The village was edged with pits, some filled with chokecherries and other fruits, many more with squash and wild greens. Not for storing or drying, to preserve them for winter, since most pits contained water. Sickly sweet smells rose from them; bees and yellowjackets staggered nearby.

Akiowa knew of the water which burned. Three times a year her village shaman made festival-drink, and all shared of it, save only the youngest children. Once, too, when ill with shivering sickness, she’d tasted the potent Spirit Water of his rites. But never were such quantities needed.

“Sit, drink with me,” said Ohanko when they reached his lodge. “Six of our brothers are on the mountain, so you cannot begin the Storytelling yet.”

She sat, the rest of the village around her, and took the beaker he offered. Then gasped as the drink seared her throat.

“I told you the winter was our gain,” he said, laughing. “The snows came early. Father had made festival-drink, and it froze. He wished it thrown away, but I removed the ice and discovered this great flame-water beneath. Now we take festival-drink up to the mountain snows to freeze, and bring down all the flame-water we want.”

Judging from the amount they drank – even the children – they wanted a lot of it. Laughter became general, voices louder.

“I’ll want The Great Feast in the Storytelling,” called one man.

“Days Full of Singing!” shouted another.

“Days Full of Women,” yelled a third, provoking more laughter. Calls came from everyone, as though Akiowa had already thrust the spear into the ground.

With growing unease she turned to Ohanko. “I hope the Storytelling can begin soon. When will your men return from the mountain?”

“Two days. Perhaps more. They left only this morning.”

Shocked, Akiowa stared at him. “Then why is everyone here, waiting, if the tales cannot be told for days?”

“I need no such honour. They should go about their work. There’s much to do, preparing for winter.”

“Time enough for that another day,” he said, and drained his beaker.

After that first searing taste, Akiowa hadn’t tried the flame-water again. Curious, she went to take another sip. The spear sent a shudder into her hand; the drink spilled. Taking it as a warning, she refused more, and as afternoon slid towards evening, she understood. Arguments flared, tears flowed, vomit was spewed, children collapsed. Women screamed insults, men brawled openly. Ohanko merely laughed.

“Stop them,” said Akiowa, ashamed and angry. “Such conflict will destroy the village.”

“There’ll be peace soon. And the sore heads they’ll suffer come morning will teach them more than any words of mine now.”

Understanding came. “This gathering isn’t to honour me. It’s commonplace.”

“You are headman and shaman. You have a duty to guide your people. Winter fast approaches. What food have you stored? What meat have you dried?”

“About my story,” he said. “I’ll have The Son Who Proved His Father Wrong.”

“You need to hear The Cicada and the Honey Bee.”

“None of your preaching tales now, Storyteller. My father and his kind are gone. Live for the day. We’ll have pleasure while we can.”

“You’ve wasted all your food to make this flame-water. Your people will starve.”

He yawned, then lay down. Within minutes he was asleep.

“He dooms his people, spear,” whispered Akiowa. “How can we help them?”

One by one the villagers fell quiet and settled to sleep. They had found a kind of joy, she knew. But it was short-lived, and would bring great sorrow. She wanted none of it.

She took up the spear and left, to continue searching for true happiness.